View from the top: Lars Windhorst, German businessman and financier

Investing hundreds of millions of dollars in a New York skyscraper scheme might seem a risky bet at the best of times, let alone during a global pandemic. 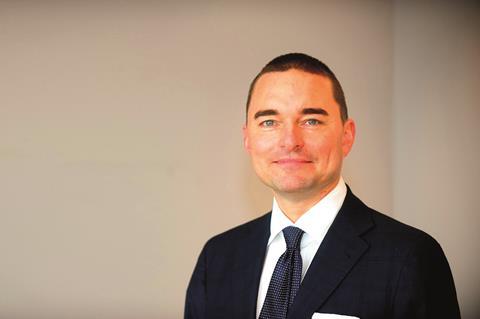 Not so to Lars Windhorst, a flamboyant German financier whose past includes personal bankruptcy, mega-investment deals and a near-death experience. The 43-year-old has just snapped up a major stake in New York’s latest super-prime residential project, 50 West 66th Street.

Shrugging off any social distancing qualms with a firm handshake when we meet in his Savile Row office, he explains why.

“There have been selective opportunities coming up again in the past few months that wouldn’t have been there six months ago,” he says, adding that the market is opening up again as sellers lower their prices in the wake of Covid-19.

Windhorst’s office boasts a panoramic view of the West End, a model of his super yacht and a sprawling desk with a sign saying ‘just get it done’.

Just getting it done is exactly what he is known for, primarily in the fields of tech, media, sport and entertainment. Last year, he bought a stake in top-tier German football club Hertha BSC, for instance.

However, through his global investment company Tennor, he has focused on increasing his property exposure in the past two years, culminating in the New York acquisition.

“Even though it’s crisis time, over the past decade New York has been one of the most liquid and deepest real estate markets in the world, so we thought it could be interesting to do something there if we found the right partner,” he says.

Windhorst is teaming up with Extell Development to build the blockbuster scheme, which is going ahead after some setbacks last year when planners and residents opposed the height of the scheme.

Sources involved in the deal say Tennor paid around $300m (£235.7m) for the stake, although Windhorst won’t confirm this. Construction on the site has started and the development is due to be completed by 2024.

“When we started talking about this scheme, there were all sorts of obstacles and challenges with the building and the permits, so it wasn’t the right time to engage,” he says. “But earlier this year, it seemed like all these legal challenges and obstacles were gone so we re-engaged. It just so happened that a few weeks after we went into talks, the lockdown started.”

New York development is a notoriously contentious field, with projects often suddenly facing hurdles due to local disagreements, and this project could no doubt encounter other obstacles along the way.

Windhorst remains confident that Covid-19 will not dent long-term demand for tall, slim buildings, however.

“I don’t think for the next 10 years everyone will be scared to go into lifts. We believe long-term in New York and think it will come back strongly. We also thought the location was great and unique, and we feel very safe to bet on that location.”

While Windhorst also remains committed to the domestic German market – in 2019, he spent half a billion euros in Germany on a mix of residential and commercial property – he is also looking for opportunities across the wider international real estate market.

“We don’t have a strategy where we build in a certain area. We look case by case at special situations where there are some challenges or something complex where we feel with our entrepreneurial approach we can add some value.

“We will try in the near-term to grow our exposure by €1bn but that could happen in six months or maybe 12 months. It really depends on whether we find the right things.”

Tennor’s investment in 50 West 66th Street marks Windhorst’s first New York real estate deal, but he is not ruling out further investment in cities such as New York and London.

“Looking at London property in the long-term, I would personally be bullish. I think the future of London as a global financial centre is very strong and positive, and could even get better after Brexit if they do the right thing and become a competitive place with a competitive regulator.”

Despite his growing appetite for real estate, Windhorst still makes headlines for his other investments. In May, it was reported that he had struck a deal to buy back illiquid stocks and bonds from H2O Asset Management, a London-based firm that suffered major outflows from its funds after the Financial Times detailed the scale of its illiquid bond holdings linked to Windhorst.

It is not the first time Windhorst has attracted controversy. After founding several businesses in his teens, he filed for bankruptcy in 2003 following the burst of the dotcom bubble.

Four years later, in 2007, it was his personal life that hit the headlines when he survived a plane crash in Kazakhstan in which he lost an ear lobe. Not that the experience has put him off flying – our interview is cut short as he has to dash off to catch a flight to Berlin for dinner with a friend (before hopping back to London the next day).

Before we part, I ask how he has time to focus on the details of a major New York property deal while managing all his other investments.

“Real estate is not extremely complicated,” he says. “There are a lot of parameters that you need to focus on that are similar in each deal and in each asset class and each region.

“We’ve been very successful in real estate investing. In markets we’re not familiar with, we partner up, like we’re doing in New York, so therefore we think it’s manageable.”

Windhorst might not be cowed by the complexities of real estate, but pulling off his bullish plans within the sector amid the current uncertainty will be no mean feat.