View from the top: Tony Pidgley, founder of Berkeley Group

During the lockdown, Tony Pidgley has tucked himself away in the pool room. Not that the Berkeley Group founder and chairman has much time for table games. He says he is busier than ever as he endeavours to keep his FTSE 100 business running against the backdrop of uncertainty caused by the Covid-19 pandemic. 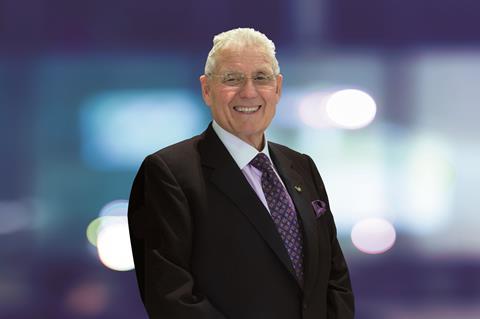 Many developers halted operations entirely late last month on the grounds that the spread of coronavirus posed safety concerns. But upmarket housebuilder Berkeley Group bucked the trend, keeping some sites open. When speaking to Property Week last week, Pidgley estimated that about 30% of its labour force was still working.

“We’ve got sites that are shut because we’ve run out of material and we’ve pretty much shut down in Birmingham,” he says, adding that other sites outside London are also “shutting down quite fast”.

Some sites, though, are still operational. “It’s very hard in the sense that we’ve got to keep social distancing, but my health and safety side have been working with [Public Health England] and they are very pleased with the way we’ve done it.”

Pidgley amassed his fortune by accurately reading property cycles – most famously in the late 1980s, when he liquidated his assets ahead of a vicious housing market crash.

It’s brought the country together. People are saying hello to each other.

In December, the 72-year-old made his latest prediction, saying that he believed the London housing market had bottomed out. However, the global pandemic has proven itself to be unlike any other past blow to the industry: the housing market has ground to a virtual halt and the big developers – along with most other stocks on the FTSE – have seen their share prices plunge.

So what is Pidgley’s forecast for life after lockdown?

“It might not be as comfortable as I want, but the one good thing about us housebuilders is we’re all financially quite stable,” he says. “We might not like the choppiness, but it’s our job to get the housing market moving and I think the government will help with that.”

‘Choppiness’ is a word neither Pidgley nor his peers thought they would be using much in early 2020. They started the new year riding a wave of optimism following Boris Johnson’s decisive election victory.

Now they’re facing the unknown. One hope Pidgley shares with many in the industry is that the government will ease planning laws to kickstart housing after the Covid-19 lockdown ends.

“All the time [Boris Johnson] was mayor, when I got in front of him, he took stuff on board, and he’s got Eddie Lister, who understands it,” he says, referring to former Homes England chairman Sir Edward Lister.

Despite the recent chaos, the veteran developer remains upbeat: “I know we’ve got Mount Everest to climb in terms of financials, but it’s brought the country together. People are being decent again, saying hello to each other.

“Nobody wants to have a row with you or flip their fingers up in the car. If there’s one thing that’s refreshing, it’s that old-fashioned decency.”