VR and AR tech is a real game changer

Last month, Property Week and Freeths assembled an expert panel for a digital think tank on augmented reality (AR) versus virtual reality (VR), and how the property industry can harness these technologies. 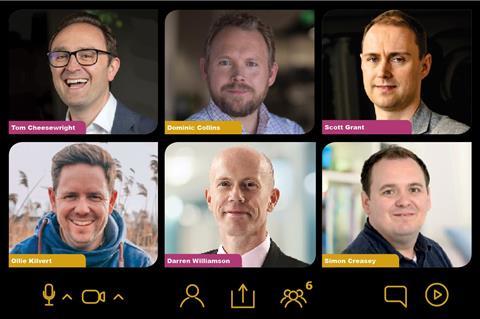 Simon Creasey: AR/VR technologies and virtual walkthroughs have been around for a long time, but haven’t really gained a great deal of traction in the property industry until fairly recently. Have you seen more people enquiring about using your products and services as a result of the pandemic?

Scott Grant: There has definitely been an increase and I’d say more of an openness. I think that the noticeable thing from our point of view is the application of VR was always more heavily weighted towards taking people somewhere to do VR in some form or other, whereas it’s definitely shifted to “how do we push those experiences out and how do we try and take traditional forms of visualisation and blend it with this experiential future that starts to match up to the world’s expectations?”

Normally it’s very hard to get people into a conversation about making a seismic shift in their approach because naturally everybody wants to play it safe, but that’s not happening anymore.

Ollie Kilvert: We’ve had a massive inbound surge. I’ve been running The 360 View for about six years now and for the first five years there was a lot of sales calls and a lot of outbound reach, and now, predominantly, most of our work is coming from inbound.

I’ll give you an example of one client who reached out to us this year that puts everything into perspective. They are a Midlands-based housebuilder and their head of marketing foresaw this second wave coming in October, so they got us to shoot about 45 of their properties to create virtual walkthroughs. They are just loving it at the moment, because basically every one of their website listings has a 360 walkaround virtual tour now.

SC: How can the property industry harness and monetise this type of technology?

Dominic Collins: The thing with property is that it is a spatial, three-dimensional medium. All of the stuff that is being developed and designed is three-dimensional, yet the vast majority of the time you’re seeing it as a two-dimensional manifestation. It’s on a bit of paper or on a screen and sometimes people go “let’s spend loads of money building something in cardboard”. Well, let’s be honest, that’s a bit crap and it’s still incredibly expensive.

Immersive [technology] essentially gives you the ability to go from 2D to 3D and the good news is that a lot of the time, all of the investment to create 3D assets [for marketing brochures and websites] has already happened and you’re just leveraging those to be able to reuse them in a way that starts to tick different boxes and serves your needs.

Darren Williamson: We’re not just talking here about a potential saving on brochure costs. You’ve also got the site visit cost and the time cost. Then if you throw Covid into the mix you can’t go out and do site visits. If you ask any developer they will say “time is money”. When we ask our clients about what is important to them it’s always getting the job through the lawyers quickly and their biggest pet hate is it takes 12 weeks to do a conveyance. AR and VR are a hybrid between the brochure and the site visit so it’s a two in one and can really help to speed up the process.

Tom Cheesewright: It all comes back to the question: “Are you taking friction out of my day? Are you saving me time, are you saving me some pain? Because if you are, then brilliant.” I don’t think we’re going to see the brochure go away any time soon because people are so used to it in terms of their business and their mental processes.

However, if you’ve got a virtual walkthrough you can potentially cut down on site visits, answer some questions and perhaps get much more of a sense for the space.

SC: I think it’s fair to say there were some initial teething problems with AR/VR hardware and software, and that may have hindered adoption. Have we moved past that point now?

SG: Undoubtedly there was a lot of initial focus on trying to use VR headsets and there were some successes, but I think people’s expectations in the very early days were way above what was delivered. There is an impressive array of options at the moment at every price point and capability, so you can get really high-fidelity, high-resolution displays with great fields of view and things like eye tracking and other capabilities that help with analysis.

DC: I think the thing to understand is that in all media, you have differences between what I would call ‘appointment to view’ and ‘always on’. So for example, television is always on and appointment to view is going to the cinema. I’ve always seen VR as an appointment to view proposition and so that’s how it should be treated. You can’t expect that someone’s going to go “yeah, that’s cool” and get their VR headset out every time and turn it on.

So for me, the most important thing if you’re going to use VR is to use it in a way that is meaningful, but recognise that there’s a friction attached to it and you’re going to have to work hard to get people there. At the same time, really think about mobile because it’s already in people’s pocket and they can use it wherever they want – so right now, that is much more of an AR type experience. In the medium to long term, the vast majority of our digital lives will be in some way layered on a physical reality and that is when it becomes incredibly meaningful for property owners.

However, the important thing to recognise as a property owner, or as a retailer, is that this is digital content laying on your building, in your location. We’re not augmenting faces, we’re augmenting places. And so today is the day that you really need to start thinking about that in terms of mitigating risk, but also more importantly, leveraging the opportunity.

SC: Are there legal ramifications and lease implications that landlords need to consider?

DW: The first point to make is that law at the best of times is creaky. It takes a while to catch up with innovation and it always has done. We have a number of different laws and regulations in place at the moment and all of those provide a matrix in terms of some sort of protection in this AR/VR world.

We have a product called MonitAR and we’ve got about a third of a million data points that show property owners what AR content is already on or around their building so that they can understand if there is a risk or if there is an opportunity.

There are certainly concerns, but I think for me it’s about enabling the future, rather than trying to use existing laws and stipulations to prevent it.

SC: Do you think AR/VR and virtual walkthroughs can ever replace physical viewings?

OK: I definitely think we’re always going to need physical viewings. They are not going to go away. However, I think a virtual walkthrough smooths the entire process. It saves time and it helps in so many different aspects. I’m really excited by AR and how the technology might be used in physical viewings. I’m also really excited by virtual walkthroughs and at some point VR headsets will catch up and they will all kind of work together. So I’m very excited about the future new opportunities.

TC: I think the answer is ‘yes’ in some cases, but not in the majority of cases. I think most people will still want to touch it, feel it, smell it and get the experience of it. But there are going to be lots of cases where if it’s an investment below a certain scale, the data and that sense that you get from the walkaround will be enough. So I think only in the minority of cases, but a growing minority, we will start to see people take decisions purely based on a virtual experience.