What’s next for the build-to-rent (BTR) sector?

Despite being larger by value, residential real estate has long been seen as the poor cousin to commercial property by institutional investors. 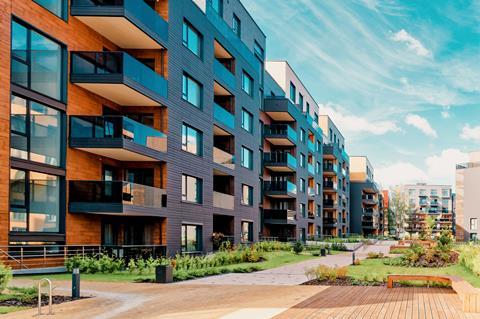 Until recently, pension funds and insurers preferred to invest in office blocks, shopping centres, retail parks and warehouses, seeing them as safe havens in which to park their money.

As recently as 2020, £50.8bn was invested annually into commercial real estate, compared with a relatively paltry £6.1bn in the residential sector, according to data from Colliers.

But could the tide be about to change thanks to the burgeoning build-to-rent (BTR) sector?

BTR has seen growing investor interest over the past few years thanks to the promise of long-term income streams with defensive, countercyclical qualities, supported by favourable demographics and supply/demand dynamics.

The sector’s resilience during Covid has seen more investors pile into – or promise to pile into – the sector. Occupancy and rent levels remained high compared with commercial real estate, and for institutional investors looking for an alternative to fixed income after years of sovereign bonds underperforming, income-producing resi has emerged as an attractive alternative.

“They want to diversify into asset classes that are less tied to GDP movements, are underpinned by solid growth drivers and are, on the face of it, less vulnerable to technological disruption.”

Apache Capital co-founder and managing director Richard Jackson concurs. “You can’t digitise a bed, as I am fond of saying,” he adds.

While still a relatively young sector, BTR is now firmly established in the UK, with close to 200,000 units built, under construction or planned, according to the latest figures from the BPF.

“This means there is a huge opportunity for growth and scale, particularly for US firms looking to expand,” says Apache Capital’s other co-founder John Dunkerley, noting that many initial BTR schemes were not designed specifically for rent.

Arguably the UK’s first dedicated BTR company was Essential Living, which was set up in 2012 to design, build and operate rental flats across London and the south.

The firm’s co-founders left to pursue different opportunities, but they were recently reunited thanks to a deal that made the front page of Property Week (30.07.21).

Bellinger says attitudes towards BTR have significantly shifted since Essential Living was born. “The policy landscape is more supportive and there is greater understanding of how BTR works,” he says.

Tenant attitudes towards BTR have also changed thanks to Covid-19, which is why Goodstone is promising bigger, better rooms to support homeworking and a greater emphasis on sustainability, social value and wellbeing. Its first scheme will have what is claimed to be Birmingham’s largest private garden.

While Goodstone is still very much focused on core UK cities, including London, more and more BTR developers and operators are looking to suburban or rural locations to deliver so-called single-family housing – as opposed to multifamily housing in high-rise blocks in cities.

It is a subsector that is experiencing rapid growth and now constitutes 12% of the market from close to 0% a decade ago, according to Savills data.

The suburban single-family subsector is attracting some big hitters such as insurance giant Legal & General, which announced in November last year that it intended to deliver 1,000 suburban BTR homes a year largely through partnerships with housebuilders.

And in January this year, Goldman Sachs acquired a 918-home single-family rental portfolio from Gatehouse Bank, which in August announced a new joint venture with investment firm TPG to build 2,500 suburban BTR homes.

Many early single-family housing strategies are reminiscent of those that were announced just as BTR multifamily housing started to take off in the UK, with investors forward-funding what would otherwise have been homes for sale and repackaging them as BTR.

Wholly owned by Apache Capital, Present Made claims to be the first company in the UK to design, develop, own and operate single-family homes for rent.

As part of a wider ESG focus, Present Made homes will be precision engineered in a factory-like environment.

This reduces build time, the number of defects, waste produced and disruption to communities close to the construction site. It also creates more energy-efficient homes, which will integrate the latest smart technology.

The key benefits of modern methods of construction (MMC) – faster access to rental income streams and better-performing buildings – have led major BTR investors such as Greystar and L&G to adopt it for their schemes.

So what’s next for BTR?

For one, expect more new entrants thanks to the sector’s compelling demand/supply dynamics and as other investors seek income-producing assets that are defensive and countercyclical in nature.

Suburban BTR and single-family housing are set to continue growing.

Within the UK rental market, more than half of households (53% or 2.3 million households) live in suburban areas, and over the past decade, there has been a significant increase in the proportion of households with children in the private rented sector, from 30% in 2008-09 to 37% in 2018-19, according to MHCLG. All this serves to underline the need for a broader range of high-quality family-friendly rental options.

Finally, industry experts expect sustainability to carry on rising up the agenda and there is a risk that BTR developers and operators in particular may end up caught between consumers and ESG-conscious investors.

Indeed, far from being swanky pads in city centre glass and steel tower blocks, the next wave of BTR homes may well consist of rows of eco-houses in fields.

If you hail from the residential sector or have an interest in the build-to-rent sector, you can’t afford to miss the RESI Convention. Join the debate as we look ahead to what the future holds in ‘The Age of Responsibility’.