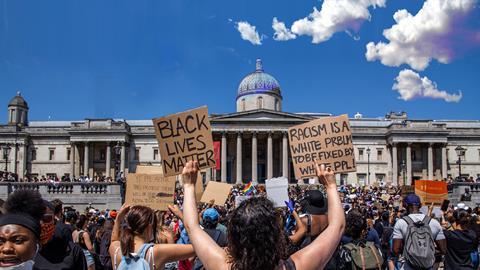 On 26 May, the world stopped for seven minutes and 46 seconds. That was the length of time it took American George Floyd to die when a police officer knelt on his throat and the silent commemoration was a watershed moment for the Black Lives Matter movement.

Since then, people around the world have taken to the streets to protest, sometimes violently, over police brutality against black people. Debate has raged over whether or not to ‘take the knee’ at sporting events and, just as with the ‘MeToo’ movement before it, people have been forced to take a long hard look at themselves in the mirror.

The property industry won’t like what it has seen – or, more accurately, been shown by those holding the mirror up to it.

In June, Bola Abisogun OBE, founder of construction and project management business Urbanis and peer-to-peer network DiverseCity Surveyors, was invited to write a blog for the RICS website about Floyd’s death and the protests.

“I feel compelled to escalate the daily pains (of my oppression) into the hearts and minds of others in an informed attempt to disrupt the many consequences of ‘privilege’; a concept that remains elusive to me as a black professional,” wrote Abisogun.

Policies help but they’re only as good as the implementation

It is testament to RICS’s desire to ‘do better’ on diversity that it asked Abisogun to share his thoughts and subsequently met with black surveyors to hear first-hand about their experiences. It is also laudable that last month it made a commitment to ‘advance inclusion for black members’, acknowledging that black members felt there was a glass ceiling and that “they were rewarded less than their white colleagues, particularly when it came to bonuses”.

But while it is to its credit that RICS now intends to introduce a reverse mentoring scheme, push companies to publish their ethnicity pay gaps and create a panel of black professionals to undertake outreach work, such actions are long overdue.

Worse, much of the wider property industry has yet to move beyond the words stage.

Now Black Lives Matter has thrown the shocking lack of ethnic diversity in the industry into sharp relief, paying lip-service to the issue may no longer be enough. Actions speak louder than words and pressure is mounting on the industry to act – and act quickly.

The figures are damning. A 2019 report by recruitment and consultancy firm Green Park looked at three tiers of FTSE 100 organisations in the construction and real estate sector, assessing: the top three roles (chair, CEO and CFO), the top 20 board and executive team members and the next 100 employees.

“We put 200 people on boards last year and 73 of them were ethnic minorities,” says Green Park chief executive Raj Tulsiani. “None of those were in construction and property.”

Tulsiani believes that the property sector has for a long time “marked its own homework” and that the introduction of HR policies around diversity is not enough.

“Policies help but they’re only as good as the implementation,” he says. “You always have to start off with diversity confidence at the top of the organisation. Once you have a zero-tolerance policy or a set of policies people know will be stuck to, then you can get into things like training and linking compensation to behaviours.”

People who behave unacceptably will also realise there may be repercussions. “At the moment, if you’re powerful and prejudiced, you’re likely to get at best a slap on the wrist,” he says bluntly.

The latest Parker review, published this February, reinforces Green Park’s findings. It notes just a handful of FTSE companies have at least one BAME director on their board: Barratt Developments, Capital & Counties, Rightmove and SEGRO.

British Land, Hammerson, Land Securities, Persimmon, St Modwen, Taylor Wimpey and Whitbread have none and the representation on the Balfour Beatty, Legal & General and Shaftesbury boards is listed as “unknown”.

One problem is the lack of transparency. In a bid to address this, RICS is encouraging companies to gather and publish their ethnicity pay gap figures. CBRE and Cushman & Wakefield already do so and British Land is working up plans to report its ethnicity pay gap, too (p39).

To that end, in 2012, JLL, Knight Frank and others launched ‘Changing the Face of Property’ to raise awareness among people from diverse backgrounds of the career opportunities property offers.

Once more people from ethnic backgrounds have taken the leap of faith and joined the industry, the next challenge, of course, is to retain that talent.

A number of initiatives have been launched with this in mind. Barratt Developments, British Land, CBRE and Legal & General have signed the Race at Work Charter, which aims to support ethnic minority career progression, for instance.

There is a feeling that real progress is finally starting to be made in addressing the lack of ethnic diversity in property. However, the industry is coming off a low base and there is a long way to go. Many experts hope to see RICS galvanise the wider industry into action.

“As one of the few real estate signatories of the business in the community Race at Work Charter and one of the only firms to voluntarily publish our ethnicity pay gap data, we welcome the announcement by RICS and will take an active role contributing to its success,” says CBRE executive director Clarence Dixon.

Karen Clements, who chairs Cushman & Wakefield’s Inspire programme, adds: “Cushman & Wakefield sees the RICS announcement on supporting black professionals as a very positive one, in particular the commitment to creating a panel of black role models.”

Dominic Scott, managing director of Foxtons’ sister company Alexander Hall, is also supportive. “Racism is not just about misguided comments, it’s a structural problem that needs a structural solution and it’s heartening to see RICS recognise this in their plan,” he says.

However, others voice notes of caution. Alluding to the wider diversity agenda, Noel McGonigle, Savills’ HR director for UK, Europe and Middle East, argues: “We should not lose focus on the need for increasing diversity in the profession across all areas.”

Others question whether the institution has the clout to drive through the changes needed.

“I don’t know how seriously companies take RICS,” says Arnold Musisi, senior development manager at Lum Chang Holdings. “No matter what RICS says, a company’s duty is to its shareholders and if they have a formula that works then what the RICS says won’t make a difference.” 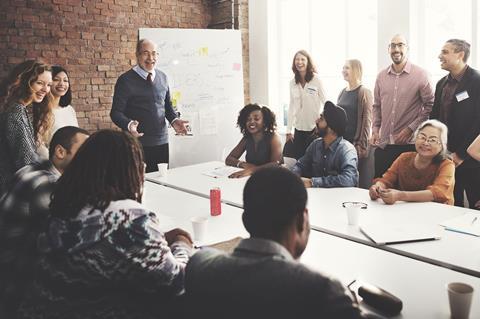 He adds that the infrastructure to effect change is simply not there in many organisations.

“It’s about shaping culture and perceptions. Ultimately, once an organisation is perceived to be diverse and inclusive, then its recruits will truly be diverse and retention rates among minority groups will be far higher.”

Natasha Broomfield-Reid, founder and director of diversity and inclusion consultancy Diverse Matters, says it is encouraging to see that RICS has spoken to people with “lived experience”, which perhaps did not happen previously. “There are some good first steps,” she says.

However, companies need to address the issue in the round, she argues. “You need to look at all the organisation’s functions – leadership, training, learning, development, opportunities, recruitment and retention.[People also need to look at] aspects of the business that help it function and what they can do when they’re reviewing that to remove barriers, so there is greater equity and people have opportunities to be successful.”

Ayesha Ofori, founder of Black Property Network and investment company Axion Property Partners, is working alongside RICS on its new diversity initiative and was among those listening to black surveyors sharing their experiences. She underlines the importance of encouraging more black people into property.

“Firms need to do more at the recruitment level to ensure enough black candidates are being reached and apply for roles,” she says.

Some graduate schemes run by the big surveying firms attract around 30% of apprentices from BAME backgrounds.

However, notes Ofori: “Career progression within firms often depends on relationships that are built with key stakeholders who are usually senior.

“It can be difficult for individuals to forge such relationships if they feel they don’t fit in or if they struggle to connect culturally with key stakeholders – as can be the case for black individuals. Firms should consider how to alleviate some of these issues.”

One answer is to have role models and introduce systems such as reverse mentoring that facilitate initial conversations and foster relationships between people, she says.

“When you get promoted or get a salary increase, you need to have supporters and people championing you and putting your case forward,” she says.

“If a certain group of people just naturally don’t have those champions and struggle to build such relationships, they will likely be disadvantaged. It’s also about working with the people that you have and building them into great leaders, so they can then be those role models.”

We need to make sure there is representation across every level

Broomfield-Reid agrees that mentoring is an important tool in the diversity toolkit, but stresses that if it is to work, “clear guidelines, clear boundaries and clear procedures [need to be] in place to support both mentor and mentee”.

Knight Frank surveyor Paul Modu adds: “If we’re really serious about diversity, we need to make sure there is representation across each and every level.”

Encouragingly, Modu has become something of a role model and says he has been inundated with messages via social media platforms from other people considering a career in property.

Unfortunately, a lot more black people – and people from other ethnic backgrounds – need to join and stay in the industry before it can even begin to call itself diverse. The great fear is that words will continue to speak louder than actions or stop being spoken at all.

As one black property professional who asked not to be named says: “We want to make sure it’s not a flash in the pan and that it’s not something that’s the topic of the moment and that in another three months, nobody talks about or does anything about.”

Now the debate has finally been broadened beyond gender and sexual orientation to ethnic diversity, it is up to the whole industry to ensure that does not happen.