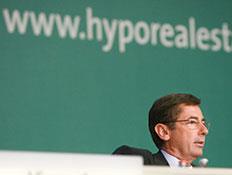 The decision tcould pave the way to at least €500m (£398m) in damages payouts to investors.

The court said the bank under former chief executive Georg Funke did not accurately inform investors of the full extent of the bank’s position in the 2007 crisis.

A lawyer for plaintiffs in the case, mostly institutional investors, said they would seek at least €500m in damages from the bank.

Germany nationalised HRE in 2009 after it collapsed in the aftermath of the Lehman Brothers bankruptcy, with the government injecting €10bn in capital and offering €145bn in liquidity guarantees to the stricken lender.

After a 10-month hearing, Munich’s higher regional court ruled this week in favour of a group of investors squeezed out in 2009.

Their lawyers claimed HRE manipulated data in 2007 and 2008 to mask the bank’s exposure to risky US investments.

This misinformation, they argued, saw them lose their investment during the later squeeze-out of private investors following the nationalisation of the bank.

The HRE Holding Group said the ruling was “not right” and that it expected a reversal on appeal.

Lawyers for the former investors in HRE welcomed the court’s ruling as a “complete victory” that strengthened shareholder rights and Germany’s reputation as a place to invest.