It's not easy being green - but property sector has no choice

April 2018 may sound a long way off, but in the context of the property industry it is really just around the corner. 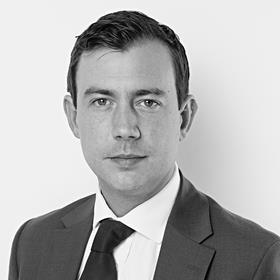 From that date, owners of environmentally unsustainable buildings – those with an F or G Energy Performance Certificate (EPC) – will be banned from signing up new tenants under the Minimum Energy Efficiency Standards (MEES) regime.

From 2023, they will also be barred from renewing existing leases, at which point the buildings will become, in effect, redundant. Enlightened property owners are already taking action.

British Land, for instance, has already reduced its rental income from F- and G-rated properties to just 3% of the total.

It has also ascertained that even its worstperforming properties can be brought up to a D rating if remodelled according to current building regulations. The problem is that many landlords are yet to even assess how many of their properties fall into the F or G danger zone.

As research from Bilfinger GVA shared exclusively with Property Week shows, 43% of property companies are still to assess their exposure to MEES. When you consider that 20% of commercial property in the UK is believed to be F or G rated, that 43% represents a huge number of time bombs ticking away on their owners’ balance sheets.

And when it comes to the cost of renovating properties to bring them up to scratch, we aren’t talking chump change. One source describes an assessment of a £110m regional office portfolio, for which the cost of MEES proofing would be more than £5m, or nearly 5% of the total value. 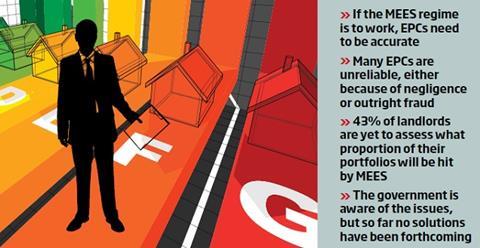 Clearly it is better to be able to spread that sort of spend out over time. But it isn’t just the industry that needs to wake up and smell the (sustainably sourced) coffee. MEES are being undermined by the poor quality of many EPCs, which vary wildly in their accuracy.

Partly that’s down to the peculiarly low bar set for potential EPC assessors. As our investigation reveals, it is possible to gain EPC assessor status in two weeks and with no previous qualifications.

The system is also clearly open to abuse, either from assessors providing a negligent service or willing to engage in outright fraud to get a landlord the rating they are after. 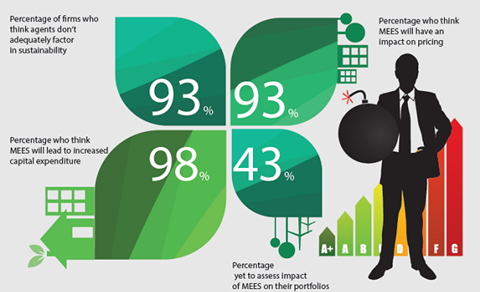 The result is mistrust, with many investors insisting on having their own EPC conducted before making an acquisition. So the system is a bit of a mess and risks undermining the MEES regime before it has even kicked in.

In general, the property industry is willing to accept intervention if it is for the sake of something as important as tackling climate change. But that goodwill could be put at risk if the foundations of an intervention prove to be rotten.

Yes, the industry needs to pull its collective head out of the sand when it comes to MEES – but the government also needs to get its act together and ensure EPCs are worth the paper they are written on. The alternative is an expensive farce.