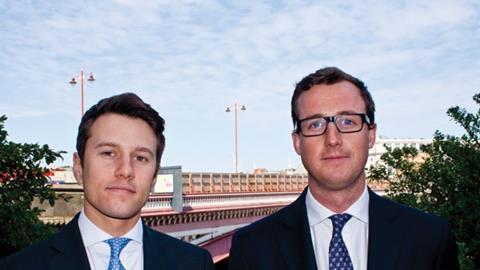 Planning worldwide work experience ought to be a full-time occupation. Yet it is just one element of the busy lives of third-year Kingston University students, Elliott Sparsis and Sebastian Abigail.

They study; they write dissertations; they organise ski trips; they have part-time jobs; they do work experience. The scene is now set for them to become even busier. On 1 May, Sociable Surveyors, the website set up by Sparsis and Abigail, went live.

Students are invited to post pieces to camera, explaining why they want to win a week’s work experience in a surveyor’s or developer’s office either here or overseas, at a cost of £10 per pitch.

Speaking a few days before young hopefuls bombarded the site, Sparsis, 28, who attended Wimbledon School, in south-west London, and Abigail, 23, who attended Ipswich School, in Suffolk, could only guess at how many people would apply. It is designed to be an online X Factor-style audition.

”We think we’ll get anything from 300 to 500,” says Sparsis. “Savills had 600 this year, just applying for their summer scheme. And that was predominantly second-year students. If you are asking for first years, second years, and third years …”

He tails off, considering how many videos he and Abigail will have to watch until the offer closes next month. They will then send the best videos to the human resources departments of the surveyors and developers taking part.

Sociable Surveyors dates back to last year, when Sparsis and Abigail were organising Kingston’s Snow Sports Society holiday to Tignes in the French Alps. They decided that Kingston University did not have sufficient contact with property professionals and therefore organised something around one of the profession’s favourite sports by staging the Social Surveyors’ Golf Gala last November.

They contacted surveyors’ and developers’ human resources departments to ask if the winning students could be given week-long internships. The top student golfers gained placements after writing 200 words saying what the aphorism “when the going gets tough, the tough get going” means for property.

Having opened the door to human resources departments, Sparsis and Abigail returned to ask for something more far-reaching. They now have six firms offering a total of 10 placements of a week’s work – and some turndowns. This time the competition is open to students at all 49 universities offering RICS-accredited courses.

Sparsis concludes: “Ema Saunders at Savills is one of the best HR managers that we dealt with. She offered us [work experience placements in] New York and Shanghai. She loved the idea. She had full confidence in Sebastian and myself.”

Leonie Rumble, Hammerson’s human resources adviser, was equally enthusiastic. After consultation with the Hammerson directors, she offered a student a week in the Paris office, and also obtained £2,000 in sponsorship.

Hammerson’s chief executive, David Atkins, will address 50 of the hopeful candidates in July at Cass Business School in the City of London. Sparsis adds: “We have also raised sponsorship out of Helical Bar. I think that [chief executive] Mike Slade appreciated where we were coming from as students, and was willing to be a main sponsor.”

Inevitably there were rejections, as Sparsis recounts: “CB Richard Ellis said that they had their own China Challenge, and they didn’t want to offer any other global internship. With Jones Lang LaSalle and King Sturge – it just wasn’t something they were prepared to invest in.”

No one quibbled about the cost, Abigail explains, because the host firm pays a week’s wage and accommodation. He adds: “What is unique about the scheme is that the transport – the return flights and transfers – all the visa costs and registration fees are paid for by the applicants’ fees. They pay £10 per location and then Social Surveyors uses
the money to pay for the flights.”

Sparsis and Abigail have happy experiences of their own summer work experience placements. Abigail spent all last summer with a month at each of Savills, Knight Frank and King Sturge. One of the highlights was taking part in a valuation of Gucci’s Mayfair headquarters for a prospective buyer.

”The valuation report was written by the valuation team,” he says. “But I helped to find comparable evidence. What was really fun was speaking to other agents.”

Sparsis’s highlight while on work experience at Charlie McClean Associates of Savile Row was viewing the penthouse of New Zealand House, Haymarket, for a prospective office client.

”[The prospective tenants] were marching about for a good hour and a half, working out exactly how many desks would fit in [the space]. That was one of their major concerns,” he says.
A month in Moss Bros’s landlord and tenant department in Clapham Junction was less enjoyable.

”That was something I definitely don’t want to go into,” he says. “I was really just reading lots of rent reviews. I’m glad I’ve done it, but it’s really not something I want to go back to in the future. The agency side – maybe.”

He will spend this summer with director Piers Nickalls in Savills’ corporate real estate department. But that will be after he and Abigail view hundreds of videos from those with the travel bug. If hundreds want to work for Savills in New York and Shanghai, he will forward the best 15 videos to Saunders, Savills’ training manager, who will interview the most promising five candidates.

This will all be fitted in around one-day-a-week jobs: Sparsis works for PMC, the Richmond-based quantity surveyor, where he carries out measuring services for residential planning applications, before he transfers his figures on Autocad to planning officers. In September, he will start a masters degree in real estate at South Bank University.

Abigail’s Saturday job is at Savills’ residential agency in Parsons Green in Fulham, where he carries up to 15 viewings with prospective buyers. This September, he joined Knight Frank’s graduate training scheme.

Although their interests diverge after graduation, Social Surveyors will continue. The pair have already invested £1,000 of their own money into the scheme and a great deal more in time.
Sparsis predicts that next year, Social Surveyors will be bigger, with 20 participants, eight of them offering overseas experience divided into distinct disciplines.

He explains: “Next year there will be Sociable Building Surveyors, Sociable Quantity Surveyors, Sociable Real Estate Managers and Sociable Developers. Other firms will see that it’s been fantastic,” says Abigail. “It took a huge amount of effort to get this off the ground. The future is going to be much easier.”

Where could you go for your work experience?