How the property industry can support LGBT+ employees

Networks such as Freehold and other initiatives promote workplace diversity, inclusivity and awareness. 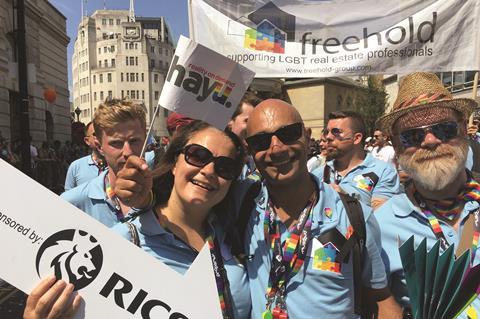 Pride not prejudice: the Freehold contingent at last year’s celebrations

“I remember walking down Regent Street in the Pride parade and seeing someone in the crowd that was shrieking: ‘Oh my god, they’re surveyors,’” says Misa von Tunzelman, head of marketing and communications at BNP Paribas Real Estate UK.

It was 2018 and the surveyors were walking in a group holding banners and placards, some bearing the RICS logo. “They had come from out-of-town and excitedly told me they were a surveyor, so I gave them a Freehold pin,” recalls von Tunzelman, who is a board member of Freehold, the LGBTQ+ real estate support network. “It’s that thing of being able to see yourself, isn’t it?”

June is annual Pride month, which each year is marked by a host of different events. This year, however, Pride month will pass by without LGBTQ+ surveyors participating in parades, as the celebrations have moved online thanks to Covid-19 restrictions.

But the fact that the event is online-only does not detract from its importance. Pride month presents an opportunity for companies to look at the representation of the LGBTQ+ community within their organisation and sector.

For the property industry in particular, it is not easy reading. Only two employers from the property, engineering and construction sectors make the top 100 of LGBT charity Stonewall’s Workplace Equality Index – JLL and Homes England are ranked 59th and 72nd respectively. By contrast, 12 firms from the legal sector make the list.

Property’s diversity issue was highlighted at an LGBT+ property conference last year. In a survey of 343 people, 77% of respondents said that out-of-office events made them feel excluded or uncomfortable; only 41% said they were ‘out’ to most clients, and 80% said they were ‘out’ at work.

For many LGBT+ people, the repercussions of not being ‘out’ at work can present daily problems. Mentioning a same-sex partner, correcting a pronoun or using a public toilet can be fraught with anxiety and potentially damaging to a person’s mental health.

Kelly Canterford was a senior surveyor at JLL until 2018 and now works as programme manager at Changing the Face of Property, a diversity initiative run by a group of major property firms. She wrote a post for Lesbian Visibility Day on 26 April in which she shared her experience of starting out as an LGBT person in the workplace.

There were no visible LGBT people of my age around me

“There were no visible LGBT people in the industry I worked in at the time,” says Canterford. “Having been ‘out’ at university, I went running back into the closet. The funny thing is it didn’t shield me from any homophobic comments that were being thrown around the office as banter. I could still hear them,” she recalls.

This verbal barrage led to a breakdown so when she started her property career she decided to come ‘out’. At the start, it was a lonely experience given the few members of the property industry who are openly gay. But then in 2012, she came across Freehold.

The network was set up nine years ago, “really out of frustration”, says David Mann, a partner at TFT, who co-founded Freehold with Saleem Fazal, a partner at Taylor Wessing.

The two met through work and did not know each others’ sexual orientation until they bumped into each other at a gay bar.

They decided to set up Freehold to counter the lack of visible LGBT+ role models in the industry at the time.

“The industry was, we found, surprisingly willing to support us,” says Mann. The group now has 1,300 members, organises a mentoring programme and holds regular events.

For Canterford, finding a professional LGBT network like Freehold had a profound effect. “It’s quite literally life-changing,” she says. “I’d gone from feeling very isolated to meeting some incredible people. I credit the relationships and friendships that I’ve built through Freehold with changing the way that I do things and what I do.

“Unless you’ve experienced having to contain part of yourself and monitoring your language on various things, you can’t really appreciate what it is not to have that.” 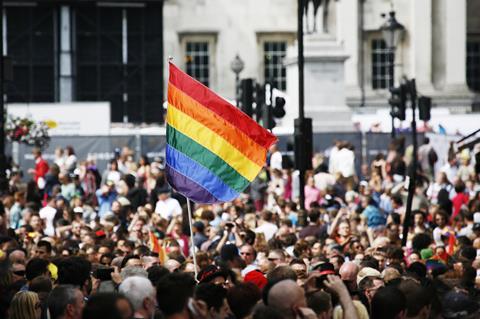 The wider property community is slowly starting to provide this support. Last year, Property Week reported that JLL had unilaterally withdrawn from managing hotel assets owned by the Sultan of Brunei. At the time, the country had announced plans to introduce a death penalty for gay men. Other property companies cancelled events at hotels owned by the Sultan in protest at the policy, which was later abandoned.

Some in the property industry have continued working for the Brunei sovereign wealth fund. Mann says: “I just question what kind of process they go through and whether money speaks louder than ethics.”

Canterford says that seeing property companies support initiatives and embrace the message of Pride is a big step towards creating an atmosphere where LGBT+ people can feel more comfortable.

“If you’ve come through the past 10 to 15 years where you’ve been closeted because there’s been no support, being able to have a drink with your CEO in the roof garden or in your executive suite is a real achievement and something to be celebrated, as there’s an acknowledgement that we need to change,” she says.

The public endorsement by businesses of Pride, together with the work of member networks such as Freehold and other LGBT property groups, helps create accountability, which is important as many people in the industry recognise more needs to be done to promote inclusivity.

While much has been achieved so far, there are still challenges ahead. Freehold is keen to focus more on intersectionality, for instance how to be more inclusive of LGBT+ people who are people of colour and likely to experience discrimination based on both their sexuality and race.

If you have a community around you, it helps you just to be yourself

“There are only so many things that you can fight on a daily basis,” says Canterford. “Then there comes a point that stops you from revealing part of your identity, because you can’t fight another battle.”

Von Tunzelman adds: “There are still groups that are underrepresented and perhaps don’t have a voice.”

To this end, it is considered important for all property companies to put in place inclusion policies even if they are not aware of any LGBT+ staff among their workforce. These policies can help staff feel safe to come out – particularly transgender people.

“As an industry, we are a long, long way behind on trans inclusivity,” says Canterford. “A number of organisations do have trans work policies or trans inclusion policies, but what is interesting is the number of businesses that don’t have them, because they don’t have any trans people, so they don’t feel the need to have them.”

Reform of the Gender Recognition Act, a piece of legislation that determines how transgender people are legally recognised, currently hangs in the balance.

While the law shapes defining rights, there is much that the property industry can do to ensure everyone is comfortable being themselves in the workplace.