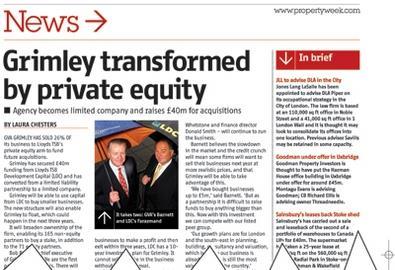 Nick McCalmont-Woods, a partner in GVA Grimley’s City of London office, has left the company.

McCalmont Woods will take a brief sabbatical before returning to the City agency market in the new year. He is not thought to be leaving Grimley for a rival agency and has not made any decision yet as to where his next position will be.

He joined Grimley as an equity partner from Jones Lang Wootton in 1998 and would have benefited from the private equity deal struck with Lloyds TSB Development Capital last month. The agency became a limited company, selling 25% of its business to Lloyds TSB and raising £40m to fund future purchases.

The deal broadened the firm’s ownership, enabling its 165 non-equity partners to buy a stake, in addition to the 71 equity partners. However, equity directors will be locked into a minimum two-year contract. It is thought McCalmont-Woods decided to cash in his equity stake. Lloyds TSB and the executive directors of Grimley will together buy out McCalmont-Wood’s stake.

McCalmont-Woods, who started his career in 1983 at Mason Owen in Liverpool, worked closely with Grimley director Rod Parker on advising Clifford Chance and the Mirror Group at Canary Wharf. Among his main clients at Grimley were IT company Sunguard and investment bank Cazenove.

Tony Joyce, Grimley’s head of City agency, said: ‘We were quite surprised, shocked and sad to see Nick leave. We got on famously, and it is a loss for GVA.’

Joyce said he would look to grow the team using capital from Lloyds TSB to buy smaller businesses. He said it was also looking to recruit a graduate, an associate and a director in the next 12 months.

‘We are going to invest further in the team. We are focusing particularly on London.’