Football may be the national sport, but few fans can boast as close an involvement with the beautiful game as Mark Collins. He counts the likes of England manager Roy Hodgson among his friends and sits on the board of directors at his beloved Fulham Football Club as well as the Football Association’s governing council.

“I have been a dedicated fan since 1972, when my brother and I were taken by our godfather to see our first Fulham game,” explains Collins.
“It was a bit different in those days. It wasn’t in the kind of league it is now. But we really embraced the Fulham culture and experience.” 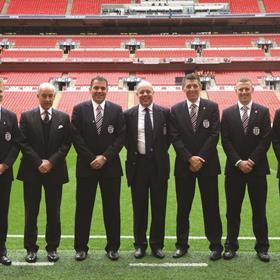 Cup club: Mark Collins (centre) chairs FA Cup committee and is on board of directors at Fulham, of which he has been a fan for 40 years

Forty years later: “I am now effectively in my 41st season,” he says, and the sport continues to be a family affair. “I used to take all three kids to Fulham with me at weekends. It’s in their blood.”

Collins’ close involvement with the club stems from his days as managing director at Harrods Estates, where he was involved in his boss, Mohamed Al Fayed, buying the club. At the time, Collins was close friends with its previous owner, Bill Muddyman.

“We lived in the same area, and we had a connection through property,” he says.

Having joined Harrods in 1996, Al Fayed “knew about my relationship with Fulham’s owners. After I had been there for about 18 months, he asked me to have a conversation with [Muddyman].”

He must have been persuasive: in 1997, Al Fayed paid £6.25m for Muddyman’s controlling stake in the club, and installed Collins on its board of directors.

He is proud of Al Fayed’s contribution to Fulham’s history. When the shipping magnate first acquired it, he vowed the club would be promoted to the Premier League within five years — an achievement Collins describes as one of his best memories.

“We were actually promoted in 2001, a year before the deadline,” says Collins. “It was a really exciting time. The promotion made Mr Al Fayed the first foreign owner of a Premier League club, and he’s still there. He’s shown unbelievable commitment both in terms of time and his financial support of the club. Even today, 13 years later, the fans love him. He’s been fantastic.”

Collins’ place in what he calls “the football family” was strengthened in 2006, when Fulham decided to field a representative for the Football Association Council, which consists of around 100 representatives from across the UK’s football industry — “from the Premier League and Championship all the way through to the Conference, and even associations with Oxbridge and the Armed Forces”, explains Collins.

It is a time-consuming role: members of the council must sit on between one and three committees, governing everything from protocol to the women’s game. Collins was first installed on the referees committee, of which he is still a member, but now also chairs arguably the most interesting of all: the FA Cup committee.

Despite his passion for the beautiful game, Collins says he has never considered giving up on property.

“When I was at Harrods Estates, on two occasions for a very limited time I stepped in as chief executive of Fulham, so I’ve had experience of running a football club at the highest level,” he says.

“Property has always been my first love, though. What is very interesting about football is that it really spans the whole spectrum of people and interests.

“From a business perspective, it’s been very useful. I’ve been fortunate to build quite a number of long-term relationships from a property perspective into football and vice versa.

“I describe my involvement with football as my ‘evening and weekend job’, but I would never consider going full time.”