It has taken less than a year for CBRE to exceed the ambitious charity target it pledged to fulfil.

In February, CBRE staff voted that the company’s official charity for the next two years would be Shelter. In the first year alone, the company pledged to raise £250,000 for the charity to help it provide support for more than 1,300 families. That target has already been smashed.

In order to reach the target, employees have organised and taken part in bike rides, bake-offs, marathons, treks and mountain climbs, and have clocked up hundreds of hours in volunteering. The largest fundraising push was the UK Property Industry Bike Ride, where more than 700 CBRE staff and clients raised over £40,000 for the charity.

Shelter chief executive Campbell Robb explains how the partnership works and what the money will be spent on.

How did the relationship with CBRE come about?

We work with a number of big corporations. We have a relationship with British Gas and Nationwide. We usually work with companies that get housing and property - that get this space. CBRE is one of those organisations. They’d never had a national charitable partner before, although they’d had relationships with other charities. We were shortlisted and their staff voted for us and engaged with us. I think it was a really positive decision for them to work with a single partner. It’s gone from strength to strength.

How did you go about setting the target for fundraising?

You have to judge these things according to the ambitions of the company - and CBRE is a very ambitious company. We stuck our toe in the water and came up with a target of £250,000. It was ambitious but they’ve smashed it. That’s great. The money is hugely important because it helps us do so many things, but what’s also great is the engagement from the staff. Across the country they have got involved and got a buzz out of it. We’re hoping to raise even more next year. 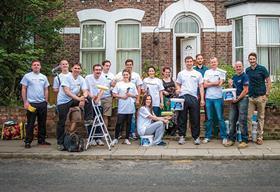 Do you provide advice on what sorts of fundraising activities might prove successful?

I think it’s a mixture. They’ve got some great events. They’ve got bike rides that they’ve done before. The leadership team at their national conference made some donations, too.

But we also run events. We’ve got something called Vertical Rush in the City, where people run up to the top of Tower 42. So people can get places in that, if they’re a partner of ours. We’ve got marathon places and things like that, so it’s a real mix.

And then there is what staff themselves think up - they have their own ideas and want to get involved. There was a walk along Hadrian’s Wall and a Three Peak Challenge. Some of the events are organic and others we help to organise.

Is the money ring-fenced for particular activities?

The money will help people facing homelessness. It will help offices around the country and help pay for our helpline and advisers. It’s really targeted at our frontline services and the advisers who help people directly. With all our partners we establish early on what they want to do. British Gas, for example, gives us money for campaigning. With CBRE it’s still about helping people directly.

Does the partnership go beyond just fundraising?

We have a chain of shops and some of CBRE’s retail team has helped us on a pro bono basis. So it’s not just about funding; it’s about working as a partnership. The value of that work isn’t counted in the fundraising total - it’s something separate. It means we get access to those skills that CBRE has within its business. People can help in lots of different ways. They can raise money, which makes a big difference, but they can also come along, talk to our guys and see what advice they can provide. It’s a real partnership that goes beyond just the traditional fundraising model.