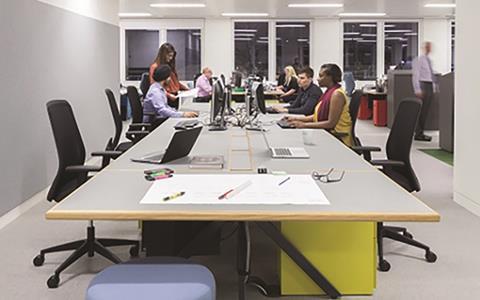 The certification, part of the WELL Building Standard, is a measure not just of a building’s environmental sustainability but also its impact on its inhabitants.

Designed as a practical expression of the company’s focus on encouraging sustainability and wellbeing for its clients, the fit-out of the building was a collaboration between Cundall and its architect Studio Ben Allen. According to Cundall, the new office is a means of demonstrating how applying a selection of carefully thought-out features can create a healthy, efficient and future-proof space that puts the wellbeing of the occupants at the heart of the design.

Property Week caught up with Alan Fogarty, sustainability partner at Cundall, to find out more.

Was One Carter Lane your existing office or one you were moving to?

It was one we were moving to. When we were looking around for new offices we had heard of the WELL Building Standard and I looked at it and it seemed quite sensible and straightforward. I thought a lot of it was in line with what we were already doing. Why did we need a standard for it? But we decided to do it so we could find out more and discover where the devil was in the detail. So we then selected One Carter Lane and looked into how we could apply the standard. We were also looking to apply BREEAM and SKA [sustainability standards].

We were telling people that they should be doing sustainability, so we should be practising what we preach.

How confident were you going into the process?

We weren’t quite sure where we would end up. We just thought that we would go for it and see where we ended up. So we went about our design and went through a detailed process on how you can make the fit-out compliant.

What challenges did you encounter?

One of the early things was that we were dealing with an American standard. We weren’t familiar with them, and if we rang up a company, for furniture, or anything really, and asked if they were compliant, they wouldn’t have heard of it. We would be passed to three or four people within their organisations before we would get hold of someone who could say yes or no. There was no guarantee even if it was an American company with a business in the UK.

How was the relationship with your architect?

The architect was a small practice, but it was gung-ho about the whole thing and it has done a cracking job. It understood where we were trying to get to. We also had a small contractor, which was quite nervous about the fact that we were trying to do BREEAM and SKA at the same time. That was quite daunting for them. But they were proactive about how they went about it.

We weren’t quite sure where we would end up. We just thought that we would go for it

One of the key challenges was that it wasn’t just about collecting certificates for things. The fact was that people were going to come into our offices and take water samples, air samples and so on, and actually test whether we were compliant. It didn’t matter how much effort we put in - if we didn’t hit the standards then we didn’t pass and we wouldn’t get the assessment.

So all that effort would have gone to waste…

Exactly right. For example, with water quality, we always assume [in the UK] that we have good water quality and generally we do. But when we tested here we were exceeding the nickel content allowed by the World Health Organization. And when we told Thames Water that we wanted to put a filter on to take this contamination out they asked us if the filter was WRAS [Water Regulations Advisory Scheme]approved - an approval to ensure that anything that is connected to the water supply doesn’t cause upstream contamination issues. 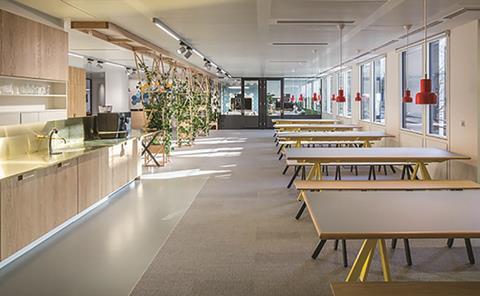 So we had a bizarre situation where we were putting in a filter to take contamination out, but weren’t allowed to in case we added contamination. That went on for a number of months and ultimately we had to go for two smaller domestic filters.

All the furniture, all the paint and all the lacquers had to be compliant. What was interesting was that we then did an air test and still failed. We didn’t understand why, but it turns out the owners had sent in their cleaners to clean the ceiling panels before we occupied the building. They used their own cleaning products rather than ours and that was picked up by the sensors. In many ways it’s about being careful about how you specify things because you know you’re going to be tested at the end. It makes people behave responsibly and actually do what they say they are going to do.

Are there any products that simply aren’t up to scratch?

The one area where I am still unconvinced is with paint. When I used a similar product at home a few years ago it took twice as long to put on to the surface of the door and it turned yellow after three months. So here we went for quite an expensive brand and it hasn’t turned yellow, but it still doesn’t keep the dirt out of the paint as well. So trying to clean it is rough on the paint and it won’t last as long. But manufacturers will come up with new products and they will ultimately deliver properly.

Isn’t doing a fit-out that complies with all these standards a lot more expensive than if you simply didn’t bother?

Not really. We did a few things to comply with the standard that we would have done anyway. The actual construction cost isn’t that expensive. It really doesn’t take long to recoup the expense, and that’s before you start thinking about the wellbeing benefits in terms of absenteeism and so on.

Do your staff appreciate the environment?

Yes. We’re about to do a formal post-occupancy assessment to find out exactly what has worked and what hasn’t, but certainly generally the feeling is good. We have a new canteen area right in the heart of the office and it’s really well used - it’s full all the time. People are socialising and using it for breakfast and lunch, and as an informal breakout space.

There is a really good vibe. People have said that the air quality is really good, which is positive

There is a really good vibe. People have said that the air quality is really good, which is a very positive thing to hear. And we’ve just been looking at absenteeism figures, comparing the London office with other offices. The reduction in absenteeism is about twice theirs. It’s too small a sample to be definitive, but it certainly indicates that something is different.

So are you looking to replicate the project elsewhere?

Very much so. The next office move is likely to be in Dubai and our lead over there is very keen to get the WELL standard into it because he’s seen what it’s done here in London. A lot of it is pretty simple: it’s about doing what you would normally do but in a different way, like providing plants. I don’t think we properly understand the stress relief they provide. It’s been very positive.