Placemaking has dominated conversations about improving our cities in recent years. The ubiquitous use of, and interest in, the word ‘place’ shows we are becoming more acutely aware of the spaces between buildings and their power to knit together and animate communities. 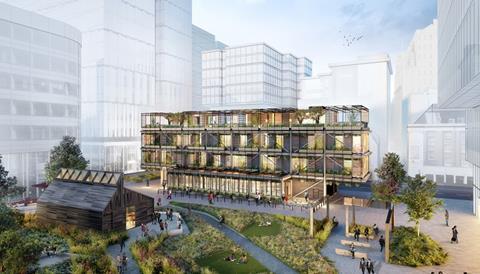 Developers are increasingly mindful of how public realm, when cultivated correctly, can yield significant civic and commercial benefits. Architects and urban designers are tasked with creating spaces with meaning – not just accessible, but also a valuable commercial amenity. The resulting places are not just a gesture, but a thoughtful piece of the tapestry of the public domain; a connection to the immediate and wider city community.

It is not just residential neighbourhoods that have benefited from this focus on public realm. Several office developments we are working on pivot around  significant new public spaces that help to mediate between the public and private, and generate significant advantages for the workplace.

The rise of new economic models has led to a shift away from traditional perceptions of workplace. The expanding gig economy favours sharing over fixed leasing and co-working spaces over private offices. Traditional property companies are giving way to (or becoming) service providers, and in doing so are redefining space inside and outside buildings; offices once thought of as silos for production are increasingly seen as enablers of social capital.

However, the fluidity of ‘sharing’ gives rise to one its greatest challenges: how to combine the flexibility and influence of new technologies with the formation of connections between individuals and entities.

Perhaps now more than ever, the enduring qualities and permanence of ‘place’ can help moderate the transience of the ‘new’ workplace. Furthermore, as the boundaries between work and play become less distinct, so recreation amenity, wellbeing and leisure uses, or ‘co-play’, will become as much a driving force as co-working in these spaces.

At 245 Hammersmith Road, Sheppard Robson sought to “blur the boundaries between live, work and play”

At 245 Hammersmith Road, we worked closely with Legal & General to create an office-led project that uses public spaces to blur the boundaries between live, work and play. At the heart of the design is a pocket park accessed via a new piazza. While this involved complex negotiations between the surrounding building owners, the unlocking of the central space, coupled with the building’s plan, was a vital step to transform a sequence of arrival spaces.

Rather than abutting a busy street, the building entrance is set back, creating an open-air reception, of sorts, for the buildings surrounding the square

and removing the hard edges of a traditional office development. This increased permeability through the site and blurring of the building line result in a more vibrant and inviting reception space – one that expands the extent and quality of the public realm and enhances the everyday experience of the building’s users.

At Hardman Square in Spinningfields, which became the final piece of the jigsaw for a key Manchester scheme, our proposal for Allied London pushed the boundary of building and landscape even further. Here, The Pavilion, a timber-framed retail building, is complemented by a landscaping scheme called The Field.

The landscaping and its relationship to the building were the key factors driving the project’s concept. The Pavilion, wrapped in a green veil of plants and a delicate trellis, mediates between the glass and metal of surrounding buildings and provides the much-needed injection of green space that complements The Field. The concept was for a building and landscape whose relationship was both intertwined with, and enhanced, its surroundings.

The public realm, envisioned as a series of external spaces, responds to its context and the needs of the surrounding users: a wooded area offers shelter, shade and privacy; a transition zone of soft landscaping gives rise to smaller retail kiosks and informal seating; and a wild flower meadow offers openness and opportunities for ad hoc events.

The retail building becomes part of the public realm by continuing the natural treatment of the square that wraps up and over the building. The green frame creates different visual connections, depending on the seasons and position of the sun and the viewer. The grid form of the timber frame firmly anchors the building in its context of offices, while the dark timber further ties the relationship between the building and the landscaping it is embedded in.

The Field and The Pavilion form a pivotal space knitting together the various surrounding buildings, as well as opening up linkages through the city centre.

The architecture of future workplaces must engage with its context in a more meaningful way. It should maximise the hidden potential of physical spaces that surround it, and change the way it is used and inhabited. It should be both intrinsically linked to, while also being a part of, its public realm.

Creating places that knit building uses and users together in a common space, to dwell and enjoy, unlocks previously isolated investment in public realm and becomes an extension and enhancement of the buildings it was once bounded by.

Neal Allen-Burt is a partner at Sheppard Robson