Property experts from both public and private sector came together to discuss the capital’s commercial, residential and transport needs. 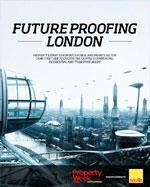 “The London property market has finally caught on to the fact that people who live in cities need and want variety in commercial spaces. However, residential is lagging behind this realisation because of the buoyancy of the market”
Lee Polisano, president, PLP Architecture

“While tech has been a driver of Shoreditch and east London, we were attracted to the area because there is a much bigger story to it than that. London has begun to move east: Old Street has matured from a mixed-use standpoint”
Nick lyle, founding partner, Crosstree Real Estate

“The boundaries between the West End and the City have become more blurred. People are more footloose about their choice of location because they are seeking space in a pleasant environment and that was a major driver behind Amazon’s recent decision to take space at 60 Holborn Viaduct”
Philip Pearce, executive director, central London agency, Savills

“When we create new infrastructure — be it transport or new housing — that has a big impact on the local community. So you need to bring them along with you”
Lorraine Baldry, chairman, Inventa Partners

“Whether you are talking about the private-rented sector or value for investors or occupiers, the challenge is that land is too expensive. Until you get third-party interference it will be hard to create affordability”
James Lock, managing director, real estate group, Blackstone

Savills held this round table, chaired by Property Week acting editor Mike Phillips, on 2 July 2013 at its headquarters: 33 Margaret Street, London W1G 0JD. If you are interested in hosting or participating in future events, please contact Niki Kyriacou in Client Solutions on 07766 247 686 or email niki.kyriacou@propertyweek.com.