The BCO has published an in-depth study of wellness in the workplace that sets out best practice guidance. 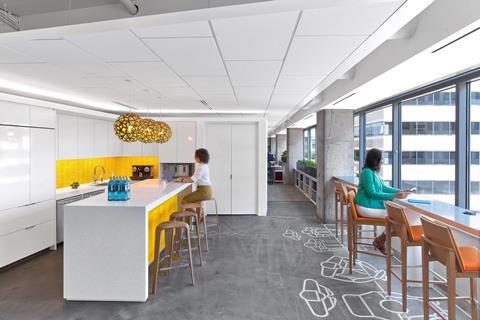 All well and good: workplace wellness could save the NHS millions of pounds

Many developers, landlords and occupiers are racing to outdo each other by implementing health-boosting measures including natural ventilation systems, circadian lighting and fitness amenities such as yoga rooms, rooftop running tracks and climbing walls.

Promoting new ways of working through building design is all well and good. But jumping on the bandwagon and basing decisions on what rivals have done rather than on reliable evidence of the benefits could not only make little difference to employees’ wellness but, in some cases, actually be detrimental to productivity and the health of the UK workforce.

In a bid to give the industry – from architects and fit-out specialists to developers, landlords and occupiers – a way to separate the wellness wheat from the chaff, the British Council for Offices (BCO) has published a 230-page study called ‘Wellness Matters: health and wellbeing in offices and what to do about it’.

The BCO believes it is the first major in-depth study of workplace wellness. And one of its authors – William Poole-Wilson, managing director at architect Will+Partners – believes it could potentially save the NHS millions of pounds by improving people’s health, if the government takes heed of the findings.

So what are the findings of the report? And just how influential could it be?

The product of a year’s work, the research, which was launched on 12 June, sets out best-practice guidance for implementing and achieving health and wellbeing across the office life cycle.

In the report, the study’s three authors – Poole-Wilson; Edward Garrod, principal at Elementa Consulting; and James Pack, founder of Sentinel RPI – and their academic advisers critique existing health and wellbeing measurement and certification, identify the most recent and relevant medical evidence and provide guidance on the business case for investment in wellness.

“There is still a perception in the industry that health and wellbeing is just something an occupier does in its fit-out and staff management, and by association investors, developers and designers need not concern themselves,” Bill Page, chairman of the BCO’s research committee, said at the time of the report’s launch.

“We fundamentally challenge that – there are opportunities throughout a building’s lifecycle to enable change. Successful intervention should manifest in shorter voids for developers, greater income retention for investors and healthier, happier staff for occupiers who will gain from better recruitment and retention.” 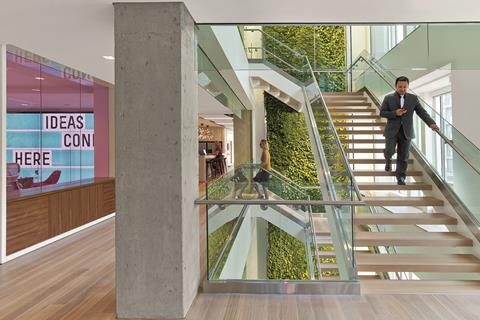 Among the key findings of the study are: that perceived cost and lack of understanding, expertise and leadership are significant barriers to progress; that wellness certification is useful but not essential; that the evidence base is strong in places and emerging in others but

is also scattered and challenging to navigate; that translating research into practice

requires a common vocabulary and closer collaboration; that evidence should be questioned before it is applied; and that execution and implementation tools are needed.

Poole-Wilson describes what he and his colleagues have produced as a “labour of love”.

“Wellness is a huge, genuine and emerging topic,” he says. “It’s in its infancy but it’s incredibly important. And only through doing this study did we realise how much it needed to be done. As a journey, it’s been fascinating – partly because of the input of academics, some of whom are clinical doctors as well as medical researchers, which is incredibly rare.

“We can see no study like it,” he adds. “It’s an absolute first and it needed to be done because there’s genuine confusion and that’s polarising.”

Poole-Wilson says that a “sensible, rational debate” is needed on the subject, which he describes as “big and complicated”. He also stresses the need for solid research before implementation, saying: “The industry is sometimes appalling at either too quickly or without good study implementing measures that are supposed to promote wellness but may not actually be effective.”

He says that greater collaboration, communication and teamwork are needed to encourage the adoption of wellness strategies. For example, during the course of its research, the team found that while the government and other public bodies have produced a series of reliable studies into wellness, there is little awareness of them in the property industry.

“It wasn’t a surprise to find that the government, the NHS and the Health and Safety Executive [HSE], along with Public Health England, have done some fabulous work in this area. Yet there is no joining it to our industry at all,” says Poole-Wilson.

If government was to work more closely with the property industry, he believes the potential benefits could be significant – and not just for workers but, economically, for the country as a whole.

“The annual costs to organisations of poor mental health are estimated to be between £33bn and £42bn. If you could lower reliance on GPs, for example, [by improving wellbeing in the workplace] and save even £5bn of that, that’s got to be a good thing,” he says. “So I think the message is clear – we’re at the stage at which we could take this one step further and actually have genuine engagement with government to see whether we could really do something.

“In an environment where the NHS is trying to reduce costs, it seems nuts not to do a study or review [as a follow-up to the BCO report],” he adds. “If I was messaging government, I’d say ‘come and talk to us’ because we may have a starting point for a wider study. And it could help protect health spending for years to come.”

Indeed, Poole-Wilson says the next step following the publication of Wellness Matters will be to encourage more study in the area and that he, his fellow authors and the BCO are currently looking into how they might assist government in engaging with the property industry to improve health and wellbeing and ease the strain on the NHS. 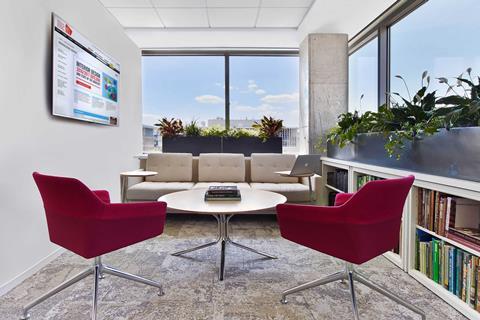 Poole-Wilson adds that it’s been “fascinating” to see how the US’s insurance-led healthcare system has incentivised workplace wellbeing in a way the UK has yet to do. Since our system is built on regulation and taxation, Poole-Wilson says the “big question” is whether government will begin to provide tax incentives for the developers, landlords, contractors and occupiers of the best places of work. “I’m not sure that’s the answer but it would encourage teamwork and that can only be a good thing,” he says.

Wellness might be one of the office sector’s biggest buzzwords but clearly there’s a long way to go before the full benefits are realised. Get it right and the potential is staggering. But it seems the BCO study is just the tip of the iceberg when it comes to the evidence that will be needed to push the wellness agenda forward and to drive improvements for businesses, their employees and the country’s coffers.