Most people would rather spend their time outdoors than in an office, shopping centre or warehouse, and employers know it, which is why more workplaces are embracing the outside inside. 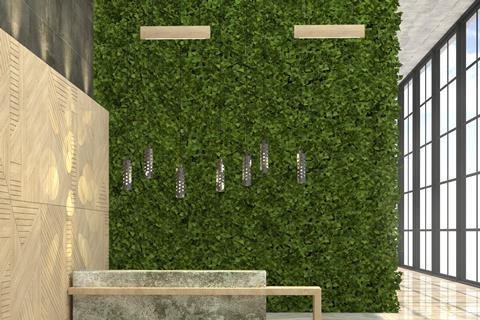 Green dream: living walls are one example of biophilic design

‘Biophilia’ is the theory that humans possess an innate tendency to seek connections with nature and other forms of life. This idea is beginning to seep into the way offices are designed. Increasingly, employers are incorporating elements from the natural world into their office design n a bid to improve the health and wellbeing of the people who work there.

But does planting a few trees or covering your reception desk in moss really help people work more productively?

“The human response to biophilic design is subliminal but very strong,” says Lizzie Jones, sustainability manager at Savills. “We have found that people will spend more time in a space where there are green or natural elements and are drawn to breakout areas with planting, for example, over those without.”

Biophilic design goes beyond sticking a lone pot plant in the corner. It can encompass everything from living walls and indoor farming to using natural materials or simply improving the amount of natural air and light available.

The evidence that it has a positive impact on people’s health and wellbeing is not just anecdotal. For its ‘Doing Right by Planet and People: The Business Case for Health and Wellbeing in Green Building’ report, the World Green Building Council examined 11 facilities around the world that have one or more green certifications, such as a BREEAM rating, and evaluated health and wellbeing features integrated into the facilities.

It found that employee absenteeism was reduced, operating costs were minimised and employees felt more productive and healthier.

At the new headquarters for the American Society of Interior Designers in Washington DC, such was the improvement in employee productivity and fall in absenteeism that it is expected the investment will be repaid within the first five years. 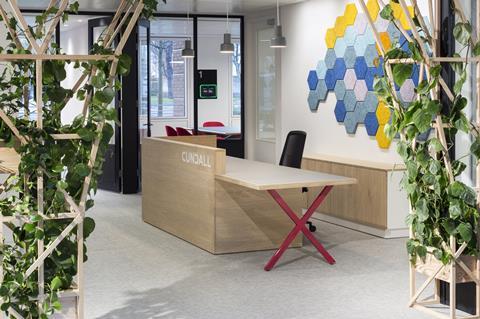 Closer to home, absenteeism at Cundall’s UK office dropped by more than four days per person per year after the company moved into a new WELL-certified office at One Carter Lane in the City of London – a 58% reduction – while staff turnover fell by 27%.

The company’s headquarters has a specially developed active green wall, a planted trellis divider and acoustic baffles integrated within tall shelving units. Cundall estimates that the changes have saved it £200,000 a year in staff costs.

Guzmán de Yarza Blache, EMEA head of workplace strategy at JLL, says: “Spending between £10 and £30 on improving ventilation, for instance, can generate the equivalent of almost £5,000 in improved productivity. In fact, there is even evidence to suggest that just by providing photos of trees, or the sound of running water, businesses can boost output.”

The trend for incorporating biophilic elements in workplaces has its roots in a wider understanding that looking after your staff is key to employee retention and health. It also fits with a desire from businesses to find ways to make their workplaces more attractive to prospective employees.

“Increasing connectivity to the natural environment – biophilic design – became popular in the mid-1980s,” Jones explains. “This is part of a wider trend to do with improving the health and wellbeing experience of the built environment and local air quality for occupants.”

Changes to office design only have to be small, according to Jones. “The human response to both the colour green and natural planting is significant,” she says. “Studies show that people are more relaxed, calmer and feel more alert and awake.”

The human response to biophilic design is very strong

The placement of biophilic elements is key: workers must be able to see a green wall, for example, and implementing one or two elements well is preferable to trying to do a number of things badly.

“An often overlooked aspect of design lies in the choice of materials,” de Yarza Blache says.

“Increasingly, we’re seeing businesses move away from corporate or sterile materials and finishes to use natural alternatives. Not only does this tend to give an office an added vibrancy and brightness, but it also often reflects their geographic and cultural context, giving a business and employees a greater sense of identity and location.”

Open spaces that create a sense of community within an office building are becoming “key differentiators, particularly in the urban environment”, according to Savills research.

The Cornerblock in the Colmore Business District of Birmingham is a good example with its communal roof terrace, which can be used by all staff working in the building. Not only does it give workers access to outside space during the working day, it encourages interaction, which in turn boosts productivity and the positive atmosphere in the office. This could be key to targeting and retaining the best employees.

A 2015 study by Human Spaces found that employees are conscious about what they want and need from their work environment: 33% of respondents said that the design of an office affected their decision over whether to work for a company.

However, the same study found that 47% of workers reported that they had no natural light within their work environment – even though natural light was the top requirement requested. Features representative of the natural world, such as indoor plants and colours such as green, blue and brown, were also in the top five most requested items. Yet 58% of workers reported having no greenery in their work environment, suggesting there was plenty of potential to improve.

Outside the world of the office, embracing the natural world also has the potential to change the way people behave as consumers. “If you have green walls, planting, natural materials and other elements of biophilic design, then people will dwell longer, which clearly has positive implications for industries such as retail,” explains Jones.

Other types of real estate, such as hospitals, could also benefit. The Akron Children’s Hospital project by HKS in Ohio, another scheme cited in the World Green Building Council’s report, was designed as a backyard, with the different floors given different themes: sandbox, puddle, garden and treehouse. 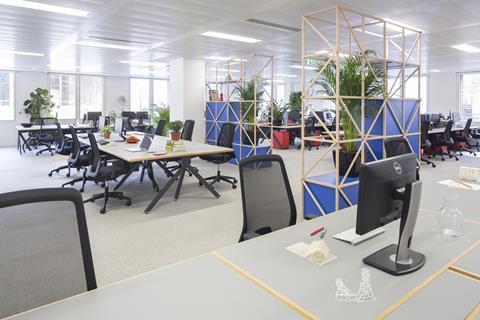 A new leaf: indoor plants are one of the items most requested by workers

Each space was painted a bright colour and included large windows opening on to greenery. The building achieved more than $900,000 (£745,560) in annual energy savings, and family satisfaction with the space increased by 67% as a result of the changes.

It is no surprise given the success of such schemes that interest in biophilia is growing. “In the past six months, we’ve really seen an increased focus on biophilic design and increased uptake,” says Alex Herrmann, who leads the building consultancy team at property management firm MAPP.

He adds that of the past 10 fit-outs MAPP has undertaken, four have “put some serious thought and design” into green elements, while “a couple of others” have thought about it.

“We expect there to be more in the next 10 projects we do,” he says. “We’ve moved massively away from a white box with a grey or blue carpet.”

He compares the rise of green elements in building design to the rise of other amenities.

“Cycling provision, gyms and coffee shops used to be a ‘nice-to-have’ feature in offices, but now they are the industry norm. I think that is what will happen with biophilia,” he says.

Promoting a greener work environment is not without its costs, however. Planting needs regular watering and installing new lighting or air systems can be expensive. Herrmann says there is still some reluctance from companies. “People still worry about added maintenance or the cost associated with it,” he says.

Roping in green-fingered colleagues to help might be one solution: forming a gardening club has the dual benefit of maintaining the building’s planting and providing an opportunity for team building.

The cost is also comparable to traditional design elements, Herrmann says, adding that installing plants instead of building walls costs a similar amount in terms of fit-out.

As companies take their responsibility to care for their employees more seriously, biophilic design looks set to become more popular.

“Expect biophilic office design to grow in significance, partly in response to urbanisation and the attendant challenges,” de Yarza Blache says. “The modern employee places a premium on health and wellbeing at work. As concerns over air pollution rise, expect to see more greenery in the office.”

Joelle Laney, senior associate at the London studio of design company Perkins and Will, agrees that the benefits make biophilic design a no-brainer and that we are going to see more of it.

“As architects and designers, we need to always be striving for the best design,” she says. “When that design is beneficial four times over – environmentally, financially, mentally and aesthetically – there’s no argument.”