Built at a cost of £46m and resembling a spaceship impaled on a giant pole, the British Airways i360 was bound to ruffle a few feathers, even in a city as open-minded as Brighton. 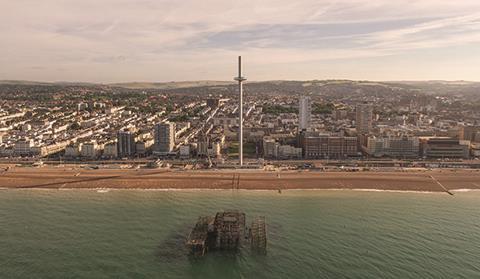 The i360 sits on the seafront opposite burnt-out West Pier - Source: Visual Air

But, despite a string of technical issues that in September left passengers stranded high above the sea, locals appear to be warming to the city’s newest attraction.

The i360 is the world’s tallest moving observation tower at 162m and opened on 4 August. It stretches into the sky opposite the skeleton of the West Pier, providing views over the sea and the city towards the South Downs and the Seven Sisters cliffs near Eastbourne.

It is the brainchild of David Marks and Julia Barfield of Marks Barfield, the celebrated architects behind the London Eye, who part-funded and developed the leisure project as well as designing it. 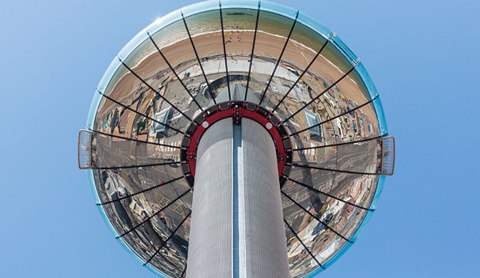 “We were flooded with enquiries from cities all over the world after we did the London Eye, and we visited many of them, but Brighton stood out head and shoulders above the rest,” explains Marks. “It had a suitable site and it is a forward-thinking, adventurous city with huge tourist numbers, located within a two-hour travelling distance of one-third of the population of England. It really is a fit made in heaven.”

Delivering the unusual structure was fraught with difficulty. Having originally received planning permission in 2006, the project was initially wholly private funded. Construction was imminent in October 2008 - Marks Barfield had ordered 660 tonnes of steel - before investors pulled out as a result of the global financial crisis. The project wasn’t resurrected until 2013, after Brighton and Hove City Council stepped in to ensure delivery after borrowing the majority of funding from the Public Works Loans Board.

“Opinion has been divided since the start, initially over the visual impact and then over funding. My group and I shared concerns over underwriting such a significant loan for a single-use building,” says Warren Morgan, leader of the council.

“Some have warmed to the i360 and others will never accept it, but that has always been the case with any addition to Brighton and Hove’s tourist offer - even the West Pier was opposed when built [in 1866].”

According to Eleanor Harris, chief executive of British Airways i360, having attracted 200,000 visitors since the launch, the early signs are that the tower will hit the targets needed to enable the council to pay back the loan. The viewing pod and ground-level visitors’ centre are attracting attention as an events venue, she adds. And she expects it to bring investment into the area, buoyed by high footfall and the new businesses that are popping up nearby. 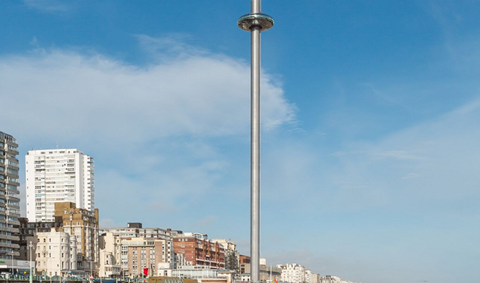 It is hoped the i360 will be a catalyst for further regeneration along the seafront - plans are already afoot for a new arena at Black Rock to replace the Brighton Centre, which is widely regarded as one of the city’s worst eyesores.

“This is a very significant project - so many don’t get off the ground - and it has regenerated a key site on the seafront,” says Julia Barfield. “This marks a transition point for the city - it will be a catalyst for civic and cultural activity.”

The British Airway’s i360 may have split opinion - supporters and opponents alike are waiting to see whether it is a success - but it cannot be denied that, like its Victorian predecessor West Pier, this wonder of British engineering has put Brighton even more firmly on the map.