Bristol gears up for mayoral election

For those in the property industry who don’t stray too far from the offices and coffee shops of central London, there is only one mayoral election this year that is of interest - and it is not one being contested by an architect known primarily for his love of red trousers. 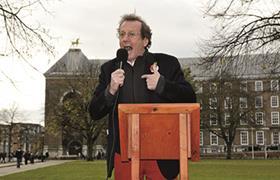 While the London mayoral election may dominate the agenda, there is another significant mayoral vote in England this year, one that will set the policy landscape in a city that is finally starting to punch its weight on the UK stage: Bristol.

Manchester may grab all the plaudits for the innovation and dynamism of its local authorities, but it is 450,000-strong Bristol that has had the fastest-growing city economy outside London in the last five years, where house prices grew more quickly than anywhere other than Cambridge and London last year, and which The Sunday Times last year dubbed the best city in the UK to live in.

It is about to become more accessible too, with electrification of the mainline from Paddington due to cut the journey time to London to well under an hour and a half.

The renewed buzz in the city follows the 2012 vote in favour of the mayoral model, a surprising result that culminated in the election later that year of charismatic red-trousered independent candidate George Ferguson, an architect and former RIBA president based in the city.

Ferguson presided over the award of the European Green Capital accolade last year and the kick-starting of long-planned projects such as a £200m Metrobus scheme to improve the city’s risible public transport system, the £91m arena on the city’s waterfront and the regeneration around the central Temple Meads railway station. But he has also courted controversy and been accused of a high-handed and arrogant leadership style.

This May the city will go to the polls again. With the full council also up for election, the impact on the city’s direction will be profound. The outcome will depend on the city’s assessment of the developer-friendly mayor’s legacy, and could determine the prospects of further devolution of power and money to the wider city region. So what’s at stake for the property industry in this contest, and which issues will determine the result?

The result is at this stage impossible to predict. Ferguson won in 2012 with a 35% share of the vote, and he is generally seen as the favourite this time, with incumbent’s advantage. He beat his closest rival, Labour’s Marvin Rees, who remains his chief competitor this year, by a six-percentage-point margin - a large but not insurmountable gap.

Turnout is expected to be much higher than the 27% achieved last time because of Ferguson’s high profile, but also because the poll is coinciding with council-wide elections, meaning the impact of those who didn’t vote at all last time around could be decisive. As Green Party candidate Tony Dyer says: “There’s a possibility George’s support will be swamped by a higher turnout.”

Adding to the uncertainty is the fact that no independent polling has been conducted, with bookmaker Ladbrokes the only organisation to have made any kind of assessment, setting odds on the outcome, with Ferguson the favourite ahead of Rees.

Whatever the result, the consensus of the city’s property industry and much of the business community is that Bristol could do with another four years of Ferguson. “He’s a fantastic, larger-than-life character, and hands down he’ll win in May,” says Tim Davies, head of Colliers International’s Bristol office.

Jeremy Richards, head of JLL in Bristol, agrees. “He’s totally committed to Bristol and he has a useful skillset in terms of the urban realm coming from his background,” he says. “He has a reputation for being pro-business, and he certainly deserves to win.”

What is it they like about him? Politically independent, Ferguson created a rainbow cabinet of the different parties once in post, designed to cut partisan bickering. He is seen to have done an enormous amount to raise the city’s profile, with initiatives such as the Green Capital and a trade partnership with China.

Shankari Edgar, founder of Bristol architect firm Nudge Group, says she has seen a dramatic change in the city in the past four years. “He has been brilliant at promoting the city - you can feel the difference in the number of cars and pedestrians on the streets,” she says, citing the decision by Ovo Energy to bring 700 jobs to the city.

French energy giant EDF is among the other big occupiers to have made significant investments in space. JLL’s Richards says a core strength has been that Ferguson understands the development cycle, meaning the city has been able to capitalise on development opportunities that previously would have passed it by. Ferguson himself says he is “unashamed” about spending some of his time in charge doing property deals to rationalise the council estate and pump-prime regeneration.

Above all, however, supporters cite Ferguson’s ability to make decisions and get things done. “Bristol had a reputation for not getting things right and not getting projects off the ground,” says Jonathan Brecknell, director of local residential developer Urban Creation. “He’s definitely picked this up - things have got done under his watch.”

As well as Metrobus, Ferguson has got work started on the arena, forced the council to buy the derelict former Parcelforce site next to Temple Meads, which is to be the lynchpin of a new ‘gateway’ to the city, and secured £200m investment in local rail transport designed to help relieve congestion.

Ferguson arrived at a council where for a long time no party had gained overall control and had little strategic direction as a result. “There was a perception that Bristol had done well but not brilliantly; that it was a bit complacent… George has challenged that,” says Andrew Carter, deputy chief executive of think tank the Centre for Cities.

Chris Luffingham, Ferguson’s campaign manager in 2012, and now founder of independent political website Bristol Wire, puts it more starkly: “It’s easy to forget what it was like before the mayor. Nothing happened. Nothing.”

Colliers’ Davies adds: “He’s stopped the bickering of the council… and he’s absolutely changed the climate for investment.”

However, his propensity to take decisions himself has also made him hugely controversial - most particularly with the motoring lobby - having forced through the introduction of residents’ parking zones, put down a blanket 20mph speed limit in the city and committed the city to years of roadworks by going ahead with the controversial Metrobus scheme, thus seemingly rowing back on an election pledge to review the project.

An analysis of the impact of the mayoralty for the council by Bristol university academic Dr David Sweeting found that many people felt unrepresented and concerned about how decisions were being taken. “It raises the question of what happens if what you want doesn’t happen to be on George’s radar,” he says.

Undoubtedly the biggest controversy was the introduction of residents’ parking zones. “He didn’t get the experts involved and it came back to slap him in the face,” says the Green Party’s Dyer. “The way it was consulted upon was so inflexible and turned potential supporters into opponents.”

Bristol’s chronic congestion will undoubtedly make transport a key issue in the upcoming campaign, but housing is rapidly becoming top of voters’ concerns. According to Hometrack, house prices in Bristol grew by 13% last year, private rents have rocketed, and the number of families presenting as homeless tripled in 2014-15. Meanwhile, housebuilding in the city has failed to recover from the recession, and just 460 homes of all types were completed in 2014-15, compared with 1,500 affordable homes recommended by the housing commission Ferguson himself set up.

“It’s a crisis, and he [Ferguson] hasn’t built enough houses,” says Labour’s Rees. “He hasn’t focused on the issues that matter to people.”

Ferguson accepts that he hasn’t delivered enough on housing, but claims that his plans have been undercut by a succession of central government policy changes, and that he has been right to focus on the city’s economy.

“I’ve been regenerating the economy of Bristol,” he says. “This is what makes the city tick and if we get the economy right it solves so many other things. We’re going to do more on housing, but we’ve had the rug pulled from under our feet.”

The biggest unresolved issue for the long-term future of the city is whether it can do what is required to persuade George Osborne to devolve greater powers and funding from London - namely the formation of a combined authority for the Bristol and Bath city region headed by an elected ‘metro mayor’.

Vast swathes of the city actually lie in the neighbouring authorities of North Somerset and Bath, South Gloucestershire and North East Somerset. Traditionally these authorities, all Conservative-led, mainly rural districts, have shared little common purpose with Bristol, but Ferguson confirms the four have made a joint bid for funding and powers worth as much as £1bn to the area and that a deal with government is “pretty close”. As Property Week revealed last week, he also hinted that the councils had agreed to include a metro mayor and joint authority as part of the bid.

Nevertheless, most experts still think the councils’ traditional differences mean their offer may not be enough to attract significant devolution of power from Westminster. Centre for Cities’ Carter says their differences “don’t look likely to be overcome, meaning the blue water between Bristol compared with the Manchester or Sheffield city regions is likely to grow”.

Tackling this is a tough ask for Ferguson - who has said he would not put himself up for election as metro mayor - as the surrounding authorities fear their concerns would be ignored within a Bristol-focused city region.

But Robert Hillman, director of Watts Group’s Bristol office, says success here is vital. “We’ve seen this happen to great effect in Manchester,” he adds. “Can the current mayor or any of the other candidates achieve this? That remains to be seen.”