Denise Li, founding chief executive of boutique Chinese investment bank PGC Capital, describes Birmingham as having “good vibrations”. Those vibrations are part of the reason that when Li decided that PGC should expand in the UK, it was Birmingham where she decided to invest first. 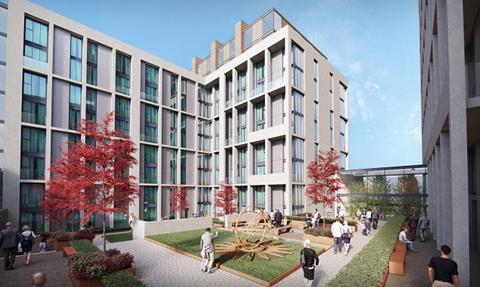 PGC entered the market in 2015 with an announcement that it would invest £600m in the UK on behalf of Chinese high-net-worth individuals and state-owned and listed companies. Jewel Court, the 77-unit luxury residential scheme in Birmingham’s Jewellery Quarter, opened in September 2017 and was its first development in the UK.

Now it has turned its attention to its second residential scheme, Lunar Rise, this time in Digbeth – part of the city that is undergoing widespread regeneration.

The scheme, on the site of a former Renault car dealership, has been designed by architects Corstorphine + Wright and will be formed of three blocks – two of 10 storeys each and one of 25 storeys. The scheme will comprise 517 apartments with ground-floor commercial space, amenities, public realm and car parking.

Eleanor Deeley, partner in Cushman & Wakefield’s resi team in Birmingham, expects the scheme to appeal mainly to young professionals and students and believes it will be a catalyst for regeneration in and around Digbeth.

“There are lots of site owners surrounding Lunar Rise – many of them have planning consents but getting on site is a different matter,” she says. “Once Lunar Rise pops out of the ground, it will instil confidence.”

Of her decision to develop a second scheme in Birmingham, Li says: “Every time I come [to Birmingham] I see changes. The city is growing, it has a young population – one of the youngest in Europe – and it’s got a positive energy and vitality about it.”

She also points to a report by the Hurun Research Institute that found that Birmingham offered the best investment returns in the world behind Vancouver and Victoria in Canada. “Birmingham is high yield and desirable,” she says. “When Chinese investors look at the UK, they see Birmingham as a safe haven.”

Street thanked PGC for the “great confidence” it has shown in Birmingham and the region and spoke more generally of a “new beginning” for Birmingham and the West Midlands, Birmingham’s success in attracting the greatest inward investment anywhere outside London, the potential impact of HS2, the combined authority’s target to build 215,000 new homes across the region in the next 15 years and the growing links between Birmingham and China.

“What I hope you see is that there are incredible links between the West Midlands and China and I know they will only go from strength to strength as our two countries thrive and this region in particular leads the UK’s revival,” he said.

As for PGC’s future in the UK, Li says it will continue to look at Birmingham and new opportunities in the area. “We are also studying the wider West Midlands area and London, particularly east London,” she adds. “We have a number of projects in the pipeline and not just residential or mixed-use, but infrastructure projects and student accommodation too.”

PGC’s activity in Birmingham speaks volumes about the city’s draw as an investment opportunity for both foreign and domestic investors. The hope now is that, like Lunar Rise, more development will get off the ground.