Brewery Square, a £125m regeneration project on a former brownfield site in Dorchester, is two thirds complete and there are already signs that what has been delivered is helping to inject new life into the town. 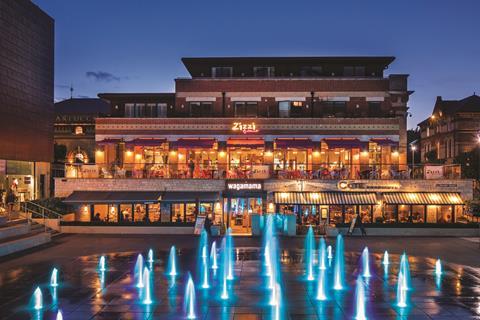 The mixed-use scheme – built on a 12-acre site by the Brewery Square Development Company, a joint venture between Waterhouse and Resolution Properties – has in effect created a new neighbourhood in the town centre and has been credited with boosting the historic market town’s appeal to both housebuyers and visitors.

But it hasn’t all been plain sailing. Planning consent for the redevelopment of the site was granted in 2007 and while the first two phases were delivered without a hitch, the third and final phase, for which approval was given in 2012, had to be revised due to a lack of commercial interest. A new application for phase three was submitted in May and a decision is expected this summer.

So what have the phases that have been delivered so far done for Dorchester? And after a shaky start to the third phase, will the revised plans be given the green light?

It has taken time to bring Brewery Square to fruition. Conversations between Waterhouse and the council began as early as 2003 and it wasn’t until 2008 that construction began. As Robert Ackland, founder and director of Waterhouse, explains: “We had a lot of tenants on site when we acquired it and it took a few years to wind them down.”

Waterhouse carried out the first phase, comprising a new health centre and the redevelopment of the old Eldridge Pope brewery office building – from which the development gets its name – into eight apartments and eight retail units, which was completed in 2008.

In 2010, Waterhouse entered into the joint venture with Resolution Properties to form the Brewery Square Development Company, which went on to develop phase 2a, completed in 2013, and 2b in late 2016.

So far, more than 300 apartments have been completed – 204 are open market, 57 are affordable and 42 are linked to the adjacent nursing home, Signature House. Most have been sold – according to Ackland, only 11 remain.

The commercial element of the development includes 41 commercial units of which 26 are retail, 12 are restaurants and cafés and three are leisure facilities – a fitness club, a Premier Inn hotel and an Odeon cinema.

Ackland says the scheme has always been about placemaking, something he believes has been achieved through the mix of uses and amenities from high-end to affordable housing, healthcare, new food and beverage outlets and the cinema.

“The high-street retail offer [in Dorchester] has always been vibrant but what the town lacked was leisure facilities such as restaurants, cinemas and gyms. Before Brewery Square, if you got off the train in the evening the town centre would be very quiet indeed.”

Although Brewery Square is not yet fully built out, Emma Eaglestone, lead director for JLL in Southampton, agrees that it has already created a vibrant evening economy for the town. 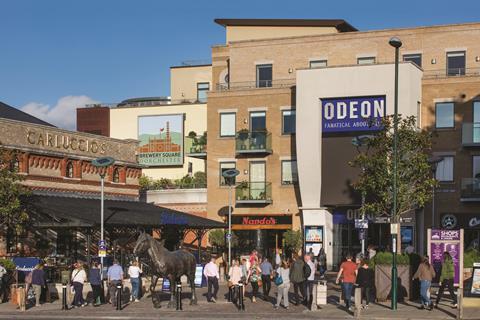 Commercial element: the scheme includes a dozen restaurants and an Odeon cinema

“This development has transformed how the town is looked at now,” she says. “Part of it is thanks to thoughtful development. There are national retailers combined with a little bit of everything – they’ve got Carluccio’s and Nando’s but they have also got independent artisan retailers.”

Karen Higham, partner at Maxgate Properties in Dorchester, says the residential element has attracted a wide range of purchasers including first- and second-time buyers and buy-to-let landlords.

“Brewery Square has its own price bracket, you pay a premium to live there and we have achieved some very good prices,” she says, but adds that “the affordable housing is also a great addition and gives lots of youngsters the ability to afford to live here”.

Despite bringing a wider buyer demographic to the town, Higham says the scheme doesn’t yet appear to have had any impact on residential property prices elsewhere in the town. However, Eaglestone adds that the wider range of buyers attracted to Brewery Square is creating a more diverse customer base for the rest of the development. “Bringing in different purchasers helps retail, which is proving to be vibrant and has really worked,” she says.

Now that the first phases have been delivered and proved successful, attention has again turned to phase three. Planning consent had originally been granted in 2012 to turn the 130-year-old brewery building into a 52-bed hotel and a 17-unit apartment block. However, plans had to be put on hold when it was unsuccessful in attracting commercial interest.

Now, the revised version – for which a planning decision is expected shortly – includes converting the former brewery building into 29 apartments with commercial space on the ground floor. Construction will begin next year along with the first tranche of a further 222 residential units. 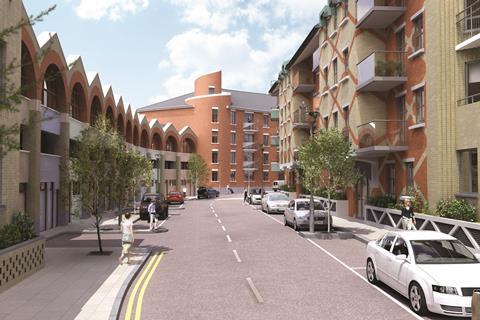 Plans change: a CGI of an earlier iteration of the third phrase – the plans have now been revised

A new 450-seat arts venue known as Dorchester Maltings, to be located at the grade II-listed Maltings building, has also been proposed and is progressing well, says Ackland, having secured £8.75m in funding from local arts charities.

Ackland says the success of Brewery Square has in part been thanks to strong local backing for the scheme. “From the beginning we have had enormous support, both from the planning authority and the local community, who have fully engaged with us and supported everything we were doing.

“We discussed our ideas and carried out a lot of genuine consultation and it has given us a good payback. When it went to the planning committee, 10 members of the public registered to speak; nine supported [Brewery Square] and the one who spoke against it was only opposed to a minor element of the scheme. It was refreshing because normally one meets with nimbyism on developments of this scale.”

As with any scheme of the scale of Brewery Square, development hasn’t been without its challenges. But the first phases have helped boost the town’s night-time economy and it now looks like the third phase will finally be delivered.