Entrepreneurial brothers grab a slice of the action

With seven restaurants in London, 220 staff members and a loyal following of Neapolitan pizza aficionados, Pizza Pilgrims is making a name for itself amid the din of the capital’s noisy restaurant scene. 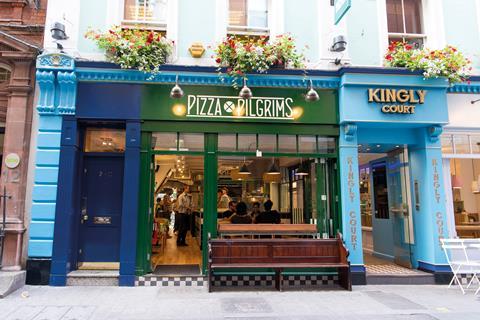 The brand has also ventured outside London opening its first restaurant in the regions last October – at Landsec and The Crown Estate’s Westgate shopping centre in Oxford.

It’s not bad going for a company that was launched just six years ago by a pair of then twenty-something brothers operating from a street-food van with maxed-out credit cards. As co-founder James Elliot explains over a pizza in his buzzing Kingly Street restaurant – eaten the way the Neapolitans do with each slice folded in three – the brothers honed their skills in Italy and then in Soho’s Berwick Street Market before opening their first restaurants.

He also says the pair have no intention of resting on their laurels. A new restaurant is set to open soon in London Bridge and they are eyeing other opportunities as well.

“It’s been a mad one,” Elliot says of his company’s journey. “The whole thing was started as a bit of a reaction to hating our jobs. I was working in television production and my brother was in advertising. We were terrible at our jobs and we hated them.

“We met up in the pub, drank five pints and got a whole load of courage and ‘great’ ideas.”

One was to open a pub that served pies but they soon realised that would be too expensive. Another was to open a business that made and sold pizza ovens – Jamie Oliver beat them to it.

It was the arrival of the street-food scene that gave the brothers the idea on which the business was built.

“I remember the MEATwagon , MEATliquor’s first iteration,” says Elliot. “It was in a car park in Peckham and they’d have 300 people gathered around an old ambulance to eat a burger. We thought: ‘Wow, we could do this without having to raise money.’ It seemed feasible.”

Back in the pub, the pair worked out how to turn their idea into a reality. Elliot, a keen amateur cook, had just returned from a cooking course in Italy where he’d used pizza ovens. While there he’d seen three-wheeled Piaggio Apes tootling around. The combination proved an inspiration and the brothers decided to open a street-food pizza business trading from a van. 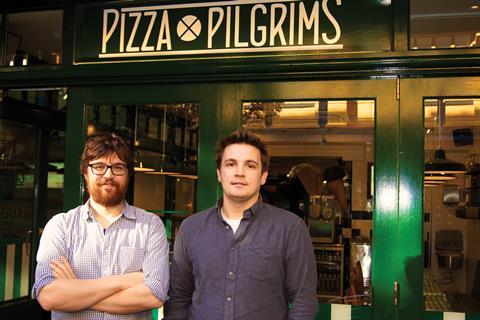 They looked into having an Ape shipped from Italy but quickly realised it would be cheaper to fly there, buy one and drive it back. While planning the trip, they decided to embark on a culinary ‘pilgrimage’ – they would drive through Italy, stopping off at foodie hotspots to undertake a crash course in pizza making.

Using their TV business connections they contacted several production companies with a view to making a series about their journey. Their pitch was successful and the result, Pizza Italiana, was broadcast on the Food Network in 2012.

They returned to London six weeks later than planned having overestimated the speed of the van (it had a top speed of 18mph – or just 3mph in the mountains). Once back, they thought about focusing on events but came to the conclusion it was “completely useless being nomadic”.

Elliot says: “You need somewhere people can recommend to their friends and come back to. We thought trading from a market would be the way to go.”

They got a pitch in Soho’s Berwick Street Market for £10 a day and began trading in March 2012.

You need somewhere people can recommend to their friends and come back to. We thought trading from a market would be the way to go

Elliot admits that the brothers didn’t have a clue what they were doing at the beginning but they traded every single day “come rain, shine and snow” for 18 months and won their stripes. James quit his job to focus on the business but Thom continued to work for the first six months – he’d go down to the stall on his lunch breaks, still in his suit, to slice the pizzas.

They also catered for events in the evenings and at weekends. “We really were working seven days a week for the first three years – we did everything ourselves,” says Elliot.

“That time was amazing,” he adds. “It gave us time to get the product right and to make a lot of mistakes without paying huge rents. That was a key thing looking back at it. It allowed us to experiment and play around and also to build a following.”

Scouting for an outlet

That following was to prove invaluable when the brothers first began to look for a restaurant site. They contacted Russell Norman – the man behind Venetian sharing plate concept Polpo, who had been a frequent customer of theirs at the market – and asked him to help them find a unit.

They met Norman for a coffee and he said he’d just viewed a site that was too small for Polpo and suggested the brothers look at it. The site on Dean Street was to become Pizza Pilgrims’ first permanent restaurant, opening in August 2013. 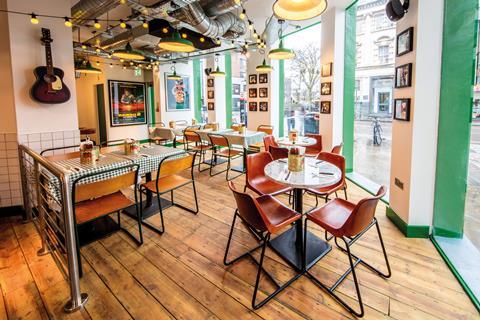 The Shoreditch branch of Pizza Pilgrims

Fast-forward five years and the brand has eight pizzerias – two in Soho, on Dean Street and Kingly Street, and others in Covent Garden, Shoreditch, West India Quay and Exmouth Market. It also has a space at Swingers crazy golf club in the City. Its newest restaurant, its first outside London and first in a shopping centre, is at the recently opened Westgate shopping centre in Oxford.

“We saw this as a new challenge – an opportunity to be part of something larger,” Elliot explains. “We’re constantly putting ourselves out of our comfort zone. Going to Oxford wasn’t sticking to what we know; it was about testing the business and the brand to see if it worked in a location like that. It’s trading well.”

In May it will open its next branch, a 2,000 sq ft restaurant on Bermondsey Street near London Bridge station.

“We’ve got another restaurant lined up but we want to grow at the right pace,” says Elliot. “We don’t want to rush. We’re ambitious but at the same time we’re not willing to expand at the cost of either the offer or the people who work for us. We want to stay independent and retain the family feel we’ve created.”

The immediate plan for the pair is to keep developing its existing sites, improving the offer and working on the staff and customer experience. “We’ll have a phase of fine-tuning before we look for the next site,” Elliot says.

One of the company’s non-executive directors, ex-YO! Sushi property director Kieran Sherlock, is on board to help it expand.

And its next site could well be in the regions. Elliot says that there is appetite outside London but that the brothers want to concentrate on getting the operation in Oxford right before embarking on another restaurant outside the capital.

“We’d like to open a few more neighbourhood joints in London too,” he says. “So far we’ve always been in places where people work. We’d love to be in areas where people live.”

Having opened eight restaurants, each of them in very different units, Elliot says he now has a better idea of the company’s ideal property requirements. “The perfect site is between 1,800 sq ft and 2,200 sq ft in high-footfall locations. That makes business sense for us,” he says.

From humble beginnings James and Thom Elliot have built a small but successful restaurant chain – one that James describes as “painfully personal”.

This becomes clear as Elliot and I leave the restaurant when one of the chefs embraces him in a big bear hug. “I love you, man,” the chef says.

The restaurant trade isn’t an easy game but the Elliot brothers are determined to push ahead and grow their business, carefully and without rushing. Pizza Pilgrims could soon be coming to a town or city near you.