Bramley Moore Dock sits at the northern tip of the Port of Liverpool. Once the heart of the city’s bustling coal trade, the site has lain dormant since 1988. Today the grade II-listed retaining walls contain abandoned buildings, a hydraulic tower, old guide ropes and moss. 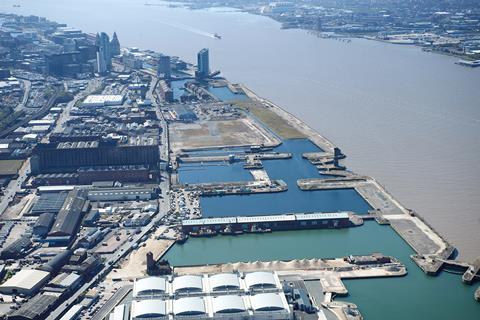 All that is set to change. Last year Everton Football Club announced that it had selected Bramley Moore as its new home – potentially signifying the end of more than 20 years of stadium-move blues for the Premier League club.

Everton signed a 200-year lease with site owner Peel Land & Property last November and is working up plans for the new stadium. Its target is to begin construction in early 2019 and complete in time for the club to kick off the 2022-23 season at Bramley Moore.

So, after more than two decades of controversy, false starts, broken promises and changes of ownership, is the plan on track at last? And if the stadium is delivered, what impact will it have on Liverpool and the wider region?

Colin Thomasson, executive director at CBRE and lead adviser to Everton on the development, says the project will provide a “£1bn boost to the local economy” including a contribution of more than £900m to the region before the stadium is even completed.

It is also an innovative, and potentially lucrative, financial model for Liverpool City Council. Having originally considered setting up a special-purpose vehicle, the club has now entered into a partnership with the local authority, which is effectively acting as a guarantor on the stadium.

Under its ‘Invest to Earn’ model, the council will borrow £280m from the Public Works Loan Board to fund two thirds of the development cost. Everton will then repay the loan as well as added interest over a 25-year period. As a result, the council will earn £162m in interest payments to spend on infrastructure across Liverpool. The returns from this deal alone stand to more than double the council’s annual earnings from real estate investments.

While other councils, notably Spelthorne and Reading, have invested major sums in real estate acquisitions in recent years, this is the first example of a local authority investing in a stadium development for a return. Liverpool mayor Joe Anderson says that against the backdrop of continuing cuts in central government funding, it is essential for local authorities to look at alternative financing models.

“It [the stadium deal] doesn’t just benefit the north of Liverpool but the whole of Liverpool, because we benefit hugely from the investment we make and the financial return that we get,” he says. “The benefit we receive as a council enables us to pay for social services and keep Sure Start and libraries open.”

While we are fully committed, and optimistic, there are still hurdles for us to overcome

As for the club, it benefits from below-market rates on its loan from the council. Everton chief executive Robert Elstone says the council will have security on the loan provided by a number of the club’s long-term revenue streams.

Everton travelled a long road to Bramley Moore Dock, where will the next steps take the club?

He also clarifies that it is being kept strictly separate from the playing budget because Premier League survival is key to the long-term prospects of the project.Majority shareholder Farhad Moshiri has also made clear his desire for the club to remain self-sustaining since investing £200m last year.

Elstone says: “We want to build our stadium the right way. It should be built to meet the expectations of players and fans. But while we are fully committed, and optimistic, there are still hurdles for us to overcome.”

One hurdle on the horizon is a successful planning application. Thomasson says the club is on track to submit in late 2018.

He adds: “Everton has been trying to move for a number of years and there’s an optimism that’s greater than it’s ever been for the club to succeed. We’ve got a consultation under way in terms of hospitality and capacity and the council is hugely supportive of our plans with the world-renowned Meis Architects.

”The mayor has been instrumental in showing leadership in making this development happen. It’s a financial boost [for the council] but more than that it’s a big regeneration project and would be a huge boost for the whole Liverpool economy.”

The wider project at Liverpool Waters remains in the hands of Peel, stretching from the Royal Liver Building down to Bramley Moore. The firm has 9m sq ft of land that it is developing and is set to start construction on a residential scheme at Princess Dock later this year. Thomasson estimates that Everton’s arrival at Bramley Dock will turn a 30-year development timeline into a five- to 10-year one.

“The original plan was to move outwards from the Royal Liver Building then eventually get to Bramley Moore over the next 30 years,” he says. “But Everton’s move creates two anchor schemes to bookend Liverpool Water. Liverpool has been building up to move to an equal footing with Manchester in recent years and the waterfront development is the missing piece of the puzzle really. It’s a catalytic development for Liverpool.”

Everton’s plans are potentially transformative for Liverpool – the challenge now is for the club and council to turn their vision into a reality.