Layo Paskin, former international DJ of breakbeat duo Layo & Bushwacka! fame and owner of iconic London nightclub The End, has taken his passion for fusing sounds and applied it to his fledgling restaurant business – creating venues that blend a buzzy yet intimate atmosphere with good service and even better food, to much acclaim. 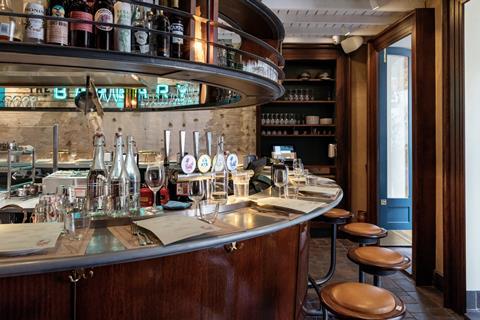 Round trip: The Barbary is a small eatery where diners are served food around a bar facing the kitchen

He and his sister Zoe now operate four venues in central London – restaurants The Palomar and The Barbary, coffee shop Jacob the Angel and pub The Blue Posts – and there could be more on the horizon once the fast-paced business, which opened its four venues in the space of five years, has slowed down enough to take stock, consolidate and plan for the future.

It was music, rather than food, that was Paskin’s first love. He grew up through various musical movements, including electro, hip hop, rare groove and house and began putting on parties for friends at the age of 15. This continued through his time at university where he hosted weekly club nights, and when he returned home having finished his degree, he decided to make his makeshift parties part of a longer-term plan.

“I asked my father, who is an architect, whether there were any spaces I could use before he developed them to throw parties in as part of the illegal warehouse rave scene,” says Paskin. “One day he came back from work and said he’d been to see a really interesting place – it was in a terrible state but the owner thought it’d make a good nightclub so I went to see it.”

That venue, on the West End’s West Central Street – then used as a whisky store and previously by the Royal Mail as a stable – was to become The End, which boasted top-flight resident DJs such as Fatboy Slim. 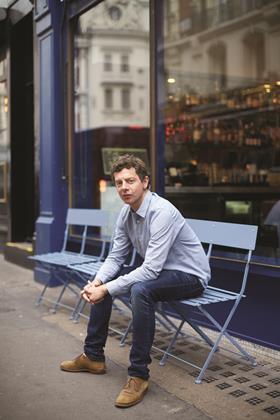 Teaming with Bushwhacker made Layo an internationally-renowned DJ

It proved successful and in 1998, Paskin launched AKA, described as ‘London’s first cocktail DJ bar’, in a room above The End. The following year, Zoe returned to the UK from Barcelona to take over as managing director of the two venues, leaving Paskin free to fulfil the role of creative director – roles they still hold in their partnership today.

While running The End, Paskin met DJ Matthew Benjamin, known as Bushwacka, and they recorded an album together, Low Life, turning Paskin into a world-renowned DJ almost overnight.

By 2007, he had begun to worry that his career as a DJ might become stale – he was approaching his 40s and wanted to add another string to his bow. An opportunity presented itself when an offer came in from a developer who wanted to buy the whole block – including the building that housed The End and AKA – to turn it into flats.

We’re spending our time consolidating, getting organised and getting better as a bigger company

“We had 10 years left on our lease and they offered us more than 10 years of our best-ever profit. Our heads ruled our hearts and we sold,” says Paskin, who continued to run the club until 2009 when the developer took it over. Unfortunately, the financial crash thwarted the developer’s plans and the building remains empty today.

Meanwhile, Paskin was looking for a new venture. “My sister and I had decided to make a change and we agreed that we would open a restaurant,” he says.

“We had two or three ideas and I asked Zoe to join me on a weekend in Tel Aviv where I was DJing to have a brainstorming session. We met these guys who had a restaurant called Machneyuda in Jerusalem and who wanted to open another in London. We said we had an idea of how we’d do it so we had a few meetings in Israel and back in the UK and one night, over a drink at Shoreditch House and a handshake, we agreed to open up what became The Palomar.”

Finding the venue was no easy task. The Paskins were determined it had to be in Soho but available properties were few and far between. They had pitched to Shaftesbury for several units – including two on Berwick Street – but narrowly missed out to the operators of Polpetto and Ember Yard.

Eventually, a site came up that the siblings liked but were not sure was suitable – while they were debating whether or not to take punt on it, a call came in from Shaftesbury via their agent asking whether they would like to take a look at an old Indian restaurant. It was on Rupert Street, which, while it has since been rejuvenated, was then a rundown back street.

“It’s close enough to Soho for people to walk to and, quite frankly, if you’re relying on passing trade, it’s not a serious business plan,” says Paskin. “We thought we could do something good enough so we took the plunge.” 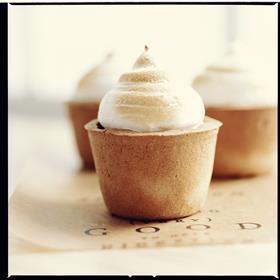 It was something of a plunge for Shaftesbury too. “They [Shaftesbury] have been very encouraging every step of the way,” says Paskin. “They took a bit of a punt on The Palomar – we hadn’t done anything before and I think a lot of landlords wouldn’t have been so brave.”

Julia Wilkinson, portfolio and group restaurant strategy executive at Shaftesbury, has a close relationship with the Paskins and many other restaurateurs on the estate. She says she found their concept “compelling” and took the unusual step of offering them first refusal on the site.

The Paskins started working on the restaurant, which serves modern Israeli-influenced fare, in January 2014 and opened it in mid-May that year.

The aim, Paskin says, was to create a place “with fantastic food as a baseline” that had “a really great energy about it” and “warm, friendly service”. Their care and attention paid off.

“The reception was unbelievable,” says Paskin. “It reminded me of when we launched our first album – there was a big furore. Obviously, we’d hoped it would be successful but the buzz around it was way beyond what we anticipated and after a year, we started to look at what to do next.”

They approached Shaftesbury about opening another restaurant and were shown a site Paskin knew well from his DJ days – a building in Neal’s Yard in Covent Garden’s Seven Dials, formerly home to Reckless Records and Slam City Skates. It suited their requirements and in 2016, they opened The Barbary – a compact eatery where diners are served small plates of North African and Mediterranean food around a modest bar facing the kitchen. 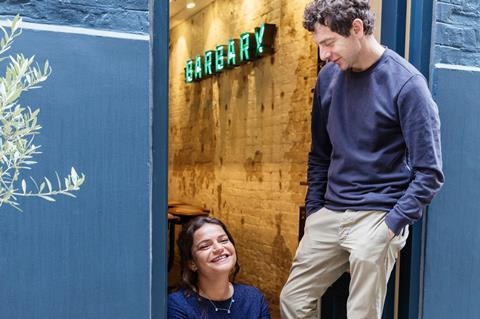 “It all went remarkably quick and thankfully The Barbary was also very successful,” says Paskin. “We knew we wanted to open another site but we didn’t want to get typecast into doing the same thing. We’re all big coffee drinkers in the family and we came up with the idea of opening an independent coffee shop.”

By chance, the site next door to The Barbary became available – the two buildings shared a basement offering operational efficiencies – and the Paskins signed with Shaftesbury for a third time. Last summer, they opened coffee shop Jacob the Angel.

Soon afterwards, The Blue Posts, the pub two doors down from The Palomar, came up for lease. The Paskins had not considered it an option but they bumped into the landlord one day and decided to take a look.

“Part of what we loved about it is that it’s been here since 1739 – the idea that it had been a pub for nigh on 300 years was exciting to us,” says Paskin. And so, having beaten 35 other occupiers to take it over, they became publicans.

The Blue Posts has been a steep learning curve for the siblings, who are more accustomed to running restaurants than pubs – although predictably they have put their own stamp on it and made food just as much a focus as the drink.

The ground floor remains a traditional pub where punters can enjoy bar snacks and a variety of drinks, albeit sourced from small, independent vineyards and breweries; upstairs is cocktail bar The Mulwray; and downstairs in the basement is 11-seat restaurant Evelyn’s Table – all designed by Chiltern Firehouse architect David Archer.

Paskin admits that opening Jacob the Angel and The Blue Posts in quick succession, while simultaneously running the two other restaurants, has been hard work, but adds that the “challenges are part of what drives us”.

He says he doesn’t have a plan for the future. “We’re spending our time as a company consolidating, getting organised and getting better as a bigger company, which is a process that will take us to the end of the year,” he says. “Then let’s see – we’d love to do something else.”

Their requirements are for old buildings in central, east or west London of up to 2,500 sq ft – 3,000 sq ft at a push. And true to form, they expect their next concept to be different to what they have done before.

Paskin has shown throughout his career – in both music and food – that he isn’t one to be pigeonholed. Those who follow the business he and Zoe have so lovingly created will be looking forward to more surprises in the years to come.