London is running out of space to bury its dead, but enterprising property professionals are scenting an investment opportunity.

Back in 2007, the innocently named London Local Authorities Act prompted a flurry of ghoulish headlines in the national newspapers. Local authorities would have the right to ‘recycle’ graves in the capital.No matter that the act included a 75-year moratorium on disturbing remains, that a grave couldn’t be reused if a relative objected, or that remains would have to be reburied in the same plot underneath, many people clearly found the idea distasteful. 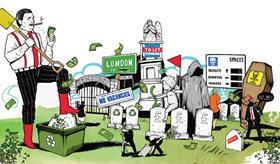 The act, however, was an early response to a problem that has only grown in the intervening years. To put it bluntly, cemeteries in the capital are filling up. The latest government report on the matter (from 2007) estimates that London will run out of burial capacity entirely by 2019, with the rest of the UK expected to follow by 2037. As Ollie Saunders, lead director, alternatives, at JLL, puts it, understating the situation somewhat: “Everything is going to be full, so it does pose a bit of a problem.”

That isn’t a huge issue in and of itself, but given the other demands on land in London - not least the chronic shortage of homes - it is difficult to see how it might be resolved. So how did we get to this point and what role might the property industry play in finding space for Londoners to rest in peace?

The current situation has echoes of the past. In the first half of the 19th century, London’s population more than doubled from one million to 2.3 million and cemeteries became dangerously overcrowded, with decomposing bodies regularly infecting the water supply and causing epidemics of cholera, smallpox, measles and typhoid fever. Something had to be done.

In 1832, a bill passed through parliament that encouraged the development of private cemeteries on land then outside the city boundaries. The result are the so-called ‘magnificent seven’ cemeteries - including Highgate, Brompton and Nunhead. The response did not end there. In 1849, the London Necropolis Company laid out plans for Brookwood Cemetery on rural land in Surrey. At around 500 acres, it was at the time the largest graveyard in the world. Indeed, until the Second World War, it was served by its own dedicated railway station.

The extent of the problem facing modern-day Londoners pales into insignificance compared with what confronted the early Victorians, but the fact remains that there are 130 local authority cemeteries, half of which are full. Indeed, some local authorities such as Tower Hamlets no longer have any capacity to bury citizens within their boundaries. The situation with Church of England graveyards is even worse - of the 181 church graveyards in the capital, only 38 have any capacity left.

The reasons are multiple. First, London’s population is booming. In February this year, the capital’s population surpassed its 1939 peak of 8.6 million and is expected to reach 11 million by 2050. While in percentage terms that is nothing like the population expansion seen in the first half of the 19th century, in absolute terms it is broadly equivalent.

Were it not for changing demographics, London’s rising population wouldn’t present a problem. In the Victorian era, the vast majority of Londoners were Christians and expected to be buried. Today, just 5% of Christians are interred, with the majority opting for cremation.

That change, however, has been offset by growing Muslim and Jewish communities, nearly 100% of whom prefer burial. Consequently, the number of cremations in London has actually fallen in recent years, from around 48,000 in 1997 to 38,000 in 2009, according to the Greater London Authority.

Religious organisations are playing their part in increasing supply. For instance, the Gardens of Peace Muslim Cemetery opened in Ilford in 2002 and was developed by a charitable trust. The cemetery is already around 75% full and the trust has a planning application in with Redbridge Council for a nearby site adjacent to Maylands Golf Course.

However, more needs to be done. Fortunately, there are signs that the market has picked up on the shortage of available space. Private investors based in the US - where cemeteries are far more often commercial propositions - have taken a particular interest.

“In the US cemeteries are recognised as investments,” says Saunders. “They produce wonderfully predictable cashflows - you know what your demand is going to be.”

Alan Plumb, a director at Savills and a specialist in cemeteries, agrees that the US could present a potential solution. “There has been some American money coming over,” he notes. “It’s what they do and they obviously think there are growth prospects here. They think they can sell more expensive funerals to UK residents.”

The economics of private graveyards can indeed be compelling. Depending on the nature of a site, you can get 650-1,000 plots onto each acre of land and the typical price per grave on a private site in London is £4,000. So, assuming an acre holds 800 plots, that’s £4m in gross receipts per acre before operating costs are deducted.

The business case was certainly compelling enough for the ESO Capital Group, which opened Kemnal Park cemetery in Bromley in late 2012. Around 10 acres of the 55-acre site has been developed so far. In March this year, it was announced that around enough land for 3,000 plots of Kemnal Park had been sold to Tower Hamlets council and the operators have a similar arrangement with Croydon.

However, we are not necessarily going to see a rash of investment, says Plumb, who points out: “We’re not very good at buying forwards any more. There was a time when all families had a plot and that’s where you went. Nowadays that’s not so popular. The economics of cemeteries are all to do with selling forward if you can, getting to know the funeral directors and selling services afterwards like cutting the grass and maintaining and selling monuments. Really it’s a question of not having too much supply because you’ll end up with a lot of land you’re not using.”

In the meantime another issue is that finding land within the M25 at a sensible price and acquiring planning permission can be challenging, as Monument Property Investments discovered. In February this year, its plans for a new cemetery on 27 hectares of land in Romford were rejected by Havering Council following sustained objections from local residents concerned about the impact on traffic volumes.

“It’s quite a difficult planning consent to achieve,” says Saunders. “On the one hand, residents won’t end up with a big development next to their homes, but they will get a lot of dead bodies. What would you rather have? Cemeteries can also be quite busy places, what with memorial services and so on.”

With planning permission tough to achieve in more built-up areas, investors might be better advised to follow the Brookwood model and look at rural areas. “Normally it isn’t too difficult to get planning permission for a woodland cemetery or an ordinary cemetery in the country,” says Plumb. “People don’t generally mind travelling in order to be in a bit of peace and quiet.”

The issue in London is serious and both not-for-profit organisations and private investors are involved in finding solutions. They may represent the most alternative of alternative markets, but in the right location - and without too much local opposition - cemeteries might just make for smart investments.