How campus culture is changing the face of London offices

“Are they really [social media] influencers?” is not a question a developer would have asked before deciding whether to let space to a potential occupier 15 years ago. But it is one of the things that Robert Wolstenholme, chief executive of Trilogy Real Estate, considers when evaluating prospective tenants for the company’s Republic office development in east London, which will offer 650,000 sq ft of commercial space over four buildings when completed. 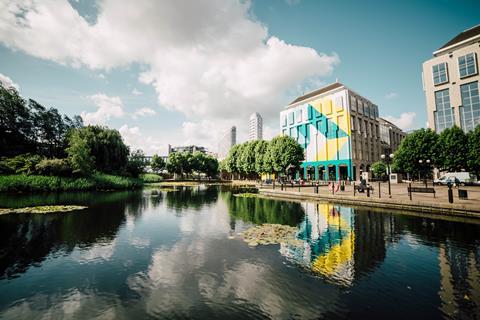 It is one of many office campuses being created across London, joining the likes of King’s Cross, Paddington Central and Broadgate in creating destinations that people choose to stay in, or go to, outside work hours.

These campuses set themselves apart from other office schemes because they are built to create a sense of place and personality, not just with their offices, but with their public realm and ground-floor space, Wolstenholme tells Property Week. It is therefore vital that landlords, who will often own or manage the entire campus on their own, consider the make-up of that space more carefully than ever – hence the need to scrutinise potential tenants’ social media accounts.

But why are developers turning towards the idea of campuses? What are the benefits for both landlords and tenants? And how will the campus model change in the coming years?

Occupiers no longer want an office that is “just a place to come and sit and go to work”. Instead, companies think about the space they are leasing in terms of “brand, recruitment, retention, productivity and doing collaborative work”, he says. “The office is no longer about your space on a floor in a building. It’s about the building, the public spaces in a building and how those spaces connect with the outside.”

Find out more from Robert Wolstenholme: Those who embrace wellness will reap the rewards

Experts can’t agree on a definition of what an office campus is, and Ian McCarter, head of West End agency at Knight Frank, shuns the term completely, instead preferring to talk in terms of “places” and “destinations”.

But there is consensus about the general features that set an office campus apart from simply a collection of commercial buildings: they are large developments that have a greater-than-usual emphasis on placemaking, public realm, amenities and retail spaces that will entice the general public to the area. They are often owned or operated by one landlord, who can curate the space as they please.

The ground floor is particularly important, Wolstenholme says. Getting the right retailers in can set the tone for the whole scheme and attract bigger commercial occupiers. Typically, Trilogy “won’t charge big rents” for ground-floor space because it wants to attract independent retailers, which is what occupiers are after. It will choose the Gentlemen Baristas over Starbucks every time. These brands are then seen as the anchors for their respective buildings. 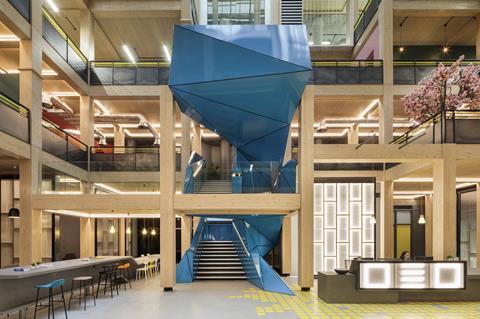 A look inside a Republic office

The public realm is also vital, Wolstenholme says. It’s a place where people from different businesses and backgrounds can mingle in a more relaxed atmosphere, and potentially collaborate on ideas. At Republic, for example, the public space has weatherproof canopies with wifi so that staff can work outside even when it rains.

He also sees a growing trend for sustainability, which younger workers are increasingly demanding, as well as an emphasis on health and wellbeing – it would be rare to have a campus without at least one gym. He is also convinced of the demand for vibrant green space, which he describes as a “retort to urbanism”. It is something that employees can’t necessarily get at home – and that’s important, given that it is easier than ever for people to work remotely, he explains.

British Land’s Wiseman says that at its campuses in Broadgate and Paddington Central, it aims to ensure people don’t simply “pass through” the public realm. It holds events such as art exhibitions and pop-up table tennis and is home to places for people to eat and drink, including street-food stalls. It has a partnership with StreetDots, a company that brings a daily-changing line-up of street-food vendors to the campus, ensuring workers and the public can always eat something new.

Alongside novelty comes convenience. British Land thinks of its campuses as “integrated pieces of city” with services that will “fill the gaps for what’s not in the surrounding area”, such as a barber shop in Paddington Central.

Get it right, and you’ll drive demand to the area, Wiseman says. That’s shown by British Land’s transformation of Kingdom Street in Paddington from a “taxi thoroughfare to a park for the campus”. The change helped ensure 4 Kingdom Street was fully let at practical completion, achieving rents “well ahead” of previous benchmarks for the campus. 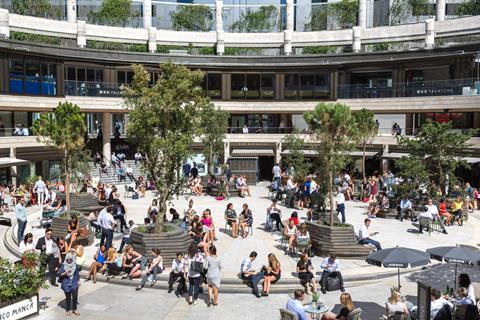 But the attraction doesn’t stop there. Operating at scale, and controlling an entire site, brings management efficiencies, and it also brings greater control over space and the ability to react quickly to changes in demand. If an occupier outgrows its space, for example, it need not move out of the campus – it can simply take more space in a different building. Similarly, by controlling lots of ground-floor space, landlords can respond to changing trends and thus keep occupiers on the hook.

Tenants are increasingly realising the benefits of campuses for them, too, says Wiseman. With better office space, they can retain talent and recruit the best staff, and the variety of space in a campus means they can scale up their footprint as they grow.

The experts describe office campuses as a win-win – but they are not without their challenges. The first is cost, particularly of upgrading public realm. It is an essential part of an office campus but it can be expensive and does not generate an immediate return, Wiseman says. “It’s a difficult proposition, sitting in front of an investment committee saying you want to invest millions of pounds in creating new public space.”

For a lot of investors, that simply won’t work, says CBRE senior director Alastair Perks. “All big estates tend to have some hefty infrastructure costs up front. For some investors, that simply doesn’t work in terms of return on investment, their IRRs, particularly if they have short-term investment horizons.” It is therefore only suitable for investors that take a longer-term view.

“It’s a difficult proposition, sitting in front of an investment committee saying you want to invest millions of pounds in creating new public space”

It can also be tough to convince occupiers about the benefits of a campus, particularly if it is a new scheme in a regeneration area, explains Knight Frank’s McCarter. He worked on leasing space in the area around White City, the former home of the BBC, and tenants were initially sceptical.

“Nobody wants to be a pioneer,” he says. “Time Warner was the first [potential] tenant but it went to Old Street instead. It said: ‘You’re five years away from what you’re trying to achieve.’”

Eventually, Knight Frank helped secure Publicis Media, which took more than 200,000 sq ft, and that has caused an influx of other media companies interested in moving to the area.

Then there’s the cost of assembling a site suitable for creating a campus. Either that will require buying up lots of buildings in one area, which is clearly expensive, or purchasing land that is less heavily used and transforming it, which comes with its own infrastructure costs and development risks.

And before you spend any money, you need to be able to find the right land, which is difficult. There are, of course, opportunities. CBRE’s Perks points to schemes at Euston, Here East in Stratford, Battersea and Canada Water, where British Land is planning a £4bn regeneration scheme. But chances to build new campuses will, ultimately, remain limited. 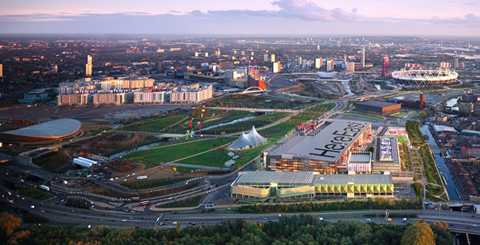 Last month, the Victoria & Albert Museum confirmed plans to create a new collection and research centre as part of Delancey’s Here East campus in Queen Elizabeth Olympic Park. Commenting after the deal, Gavin Poole, chief executive of Here East, said: “The V&A creating a new state of the art Collection and Research Centre at Here East encapsulates the vision we’ve always had for the campus. By bringing together new technology, innovation, research and a world leading institution, the Centre embodies the values that we hold and will bring an array of new opportunities to the community.”

Speaking exclusively to Property Week on a tour of the Stratford campus, Poole explains how initially the Delancey team didn’t like the term ‘campus’ but that’s what Here East ended up evolving into and now the scheme embraces it. “It’s all about collaboration and innovation. That’s the true DNA of the site. Having interconnected businesses that support enterprise growth is what we’re all about,” he says.

“Here East has become a destination and an appeal in of itself. Having the Olympic name and legacy was an advantage at the start – when you tell people you’re at Olympic Park they know where you mean. The wider scheme is always going to have appeal, but ours is distinct from that and potential occupiers want to come here to be part of Here East”

“Everyone that comes here has to be at the forefront of pushing technology, connectivity and creativity be they a university, the V&A, TV station [BT Sport] or even a dance studio [Wayne McGregor]. We reject companies, and have done so, who just want to place their backroom IT functions here, that’s not what Here East is about. We are building a cluster of companies and people with a mix of ideas trying to evolve using innovation, people, ideas and technology and a business doesn’t necessarily have to include technology but thinking of how to use technology to develop new ideas.” 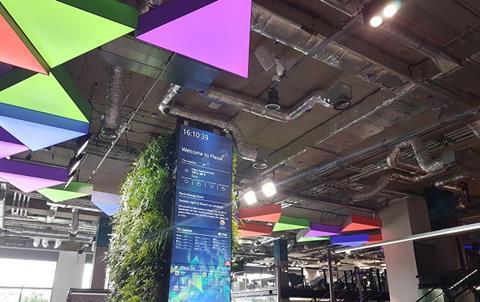 Poole goes on to suggest that the next step for campus schemes is to offer a fully-connected turnkey solution as is standard for anything under 10,000 sq ft in America and Australia. It’s a possibility he sees Here East as capable of achieving with further iterations or a spin out of Plexal, the co-working group founded by clients of Delancey. “We’re actively looking to replicate the model at other sites,” Poole adds.

“Most of the major developers in London are eagerly searching for the next opportunity for something that has the critical mass to work as a campus… but they are rare, and where they do exist most owners are looking to increase the size of [existing] campuses when the opportunities arise,” he says. “It’s not for lack of interest, but lack of opportunity.”

Perhaps the future of campuses, therefore, is not necessarily in single-ownership sites, suggests McCarter. He believes that as the benefits of campuses become more widely known, landlords will consider working with each other on ground-floor space and public realm outside buildings they individually own.

“Are we going to see maturity from those companies that see the success of these places and think: ‘I know I don’t own all of this, but if we all come together and approach the ground-floor offering as a one we’ll all benefit?’ I’d like to think so.”

With limited opportunities for new campus sites in London, their considerable benefits will only be open to those that can pull together the right parcels of land and sell the story of a new regeneration area – or work closer with their competitors than they have ever done before.