Take-up punched through the 1m sq ft mark for the first time in 2017, with the figures inflated by the 378,000 sq ft Government Property Unit deal at MEPC’s Wellington Place and activity has continued to tick along nicely ever since.

However, there is a potential issue looming large on the horizon, cautions Chris Hartnell, associate partner at Carter Jonas. The strong letting activity has seen grade-A space in Leeds gobbled up, leading to the prospect of a supply-demand imbalance.

“There hasn’t been the confidence to build speculatively,” says Hartnell. “MEPC has been the only one who has done that with any conviction over decent-sized buildings and it has reaped the rewards.”

He believes that other developers should be more confident and follow MEPC’s lead.

“It would be nice to see someone like CEG be a little bolder with their larger South Bank building at Temple Works,” says Hartnell.

“Speccing 30,000 sq ft is great because that kick-starts a massive regeneration opportunity in Leeds’ South Bank, so that’s really positive, but it is only 30,000 sq ft. If that true inward investment occupier had a significant requirement and was looking at Leeds they would struggle to find existing space.” 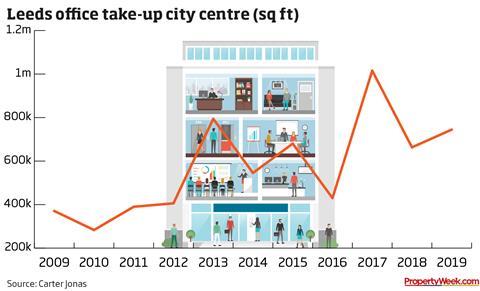 He adds that the situation is not unique to Leeds. A similar problem exists in other regional locations such as Bristol, Birmingham and Manchester in terms of the lack of existing grade-A stock. But this shortage does potentially present an issue for the West Yorkshire city if occupiers are not tied to the idea of taking space in a particular geographic location.

“We want to see a bit of development kicking on so there is a decent amount of choice and product for occupiers,” says Hartnell. “Otherwise we’re very much in a pre-let market and you’re relying on existing occupiers to have enough foresight to look two and a bit years ahead of a lease event.

“But in terms of attracting new inward investment, which is what Leeds and Leeds City Region has been all about over the past few years, you need to be able to shout about what’s going on in the city, but you also need to be able to offer the right space. So you want to see someone being a bit bold and saying ‘we are building a big chunk of space that’s coming out of the ground, so if you’re an occupier, come and talk to us’.”