Bolton Council hopes to revive a major regeneration project in a neglected Church Wharf area of the town centre that was scuppered by the recession in 2008. 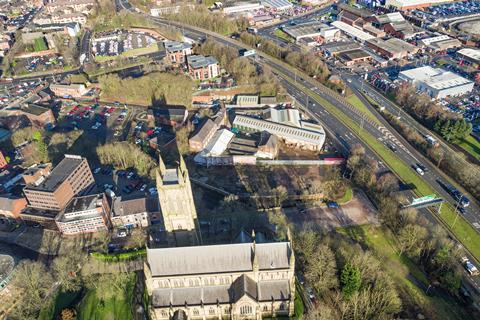 Now, as part of a £1bn masterplan, the plans have been revived in a dialled-down format, featuring Church Wharf as one of five ‘intervention’ sites earmarked for redevelopment across the town.

Judging by the language used by the council in its proposals, development is much needed. “The area can be characterised as possessing a mix of incompatible uses within poor-quality and obsolete buildings that create an uninviting environment,” the authority said in a revised planning document published in April.

So what are the plans and what is the chance of them coming to fruition?

Muse was unveiled as development partner for Church Wharf at Mipim in March. It has yet to submit a formal application but hopes to deliver a two-phase scheme comprising at least 400 residential units, retail and public realm.

Muse development director Phil Mayall expects the residential element to include a mix of one-, two- and three-bed apartments as well as townhouses. “We don’t want to create a location with one type of property,” he says, adding that the properties will be “affordable and aspirational”.

Mayall hopes the scheme will attract people of all ages, but Phil Green, Bolton Council’s assistant director for economic development and regeneration, says it could be particularly attractive to young professionals working in Manchester, because a planned railway electrification project will cut train times between Bolton and Manchester Piccadilly from 21 minutes to 12 minutes.

The second phase of the development is expected to include a retail element. However, Green says the proliferation of well-known retailers elsewhere in the town means the shops are more likely to be let to “boutique retailers relevant to the residents – we won’t be attracting big names”.

Plans for a hotel do not appear to be a priority, but Mayall says the option is “still on the table”.

Initial talk of an ‘iconic tower’ is also being played down. “It’s not something we’ve considered at this stage,” says Mayall.

For now, the main focus is to prepare the site for construction. In the council’s supplementary planning document, it admits that “parts of the site may be contaminated”. Industrial development in the late 18th century led to areas adjacent to the River Croal, south of the Church Wharf site, being neglected, “probably as a result of pollution”, the council says.

The council could also be forced to use compulsory purchase order powers to acquire property on the site it does not yet own.

Nevertheless, there is optimism about the development and its potential to boost the town’s fortunes. “There seems to be an appetite for the project that was possibly missing last time around when the property market was suffering in the wake of the credit crunch,” says Andrew Cardwell of Bolton-based property agent Cardwells. “There is an optimistic feeling that this could improve Bolton town centre and in turn create an overall benefit to the town.”

Ten years after initial plans for the site stalled, Church Wharf, if delivered, could well give Bolton a welcome boost.