North West Markets: ambitious plans along the Mersey and beyond

Liverpool’s New Chinatown development has been embroiled in a bitter dispute for years – but now, with a new owner on board, the stalled mixed-use scheme could finally be developed. 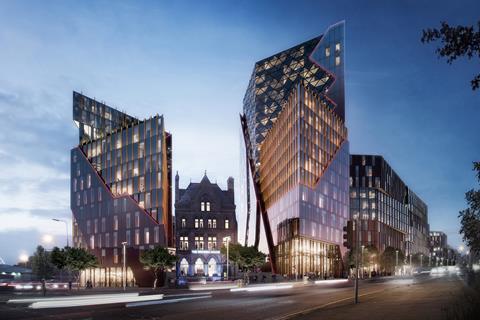 In February new plans emerged for a £220m development project on what is one of the city’s most blighted development sites. The new owner, Great George Street Developments (GGSD), intends to build 710 homes, 25 town houses, 80,000 sq ft of retail and leisure and around 65,000 sq ft of offices.

Plans by Chinatown Development Company (CTDC) to invigorate the five-acre chunk of unused land in Liverpool’s city centre were unveiled in 2015 – but the development soon hit the headlines for all the wrong reasons.

Construction had begun but ground to a halt soon afterwards when, in 2016, the contractor went into administration and relations soured between CTDC and the site’s owner, Liverpool City Council, which claimed it was owed £950,000 by the developer. A legal dispute between the two parties is still rumbling on.

Given the torrid history of the site, the question is:

Will GGSD’s scheme actually come out of the ground?

Following its acquisition of CTDC in February, GGSD hopes to resurrect the New Chinatown scheme. The consortium of investors, led by banker Jason Oakley and development director Neal Hunter, promises to ensure the prime development site finally lives up to its potential.

“There are huge opportunities with this site to tap into an area that continues to expand,” says Hunter. “The nearby Baltic Triangle and Knowledge Quarter have gone from strength to strength and an area once considered fringe is now an integral part of the city centre.”

Hunter says the consortium is backed by experienced consultants with a track record in delivering successful development projects, including Arup, Brock Carmichael, JMW and CBRE.

GGSD is in discussion with the scheme’s existing investors – many of which are Chinese –and has assured them that their contracts will be fulfilled.

The developer is also in talks with Liverpool City Council, which says it welcomes the new proposals outlined by GGSD and “looks forward to hearing more details as plans progress”.

GGSD intends to develop phase one in line with the existing consent, creating 117 apartments and around 6,000 sq ft of commercial space. It hopes to begin a 14-month building programme later this year and by the end of August will submit a fresh planning application for phases two and three.

Hunter says the priority for the two latter phases will be to develop more commercial space and a greater mix of residential, including family homes, than was outlined in the original scheme. If planning permission is granted, work on phases two and three could begin next year, with completion scheduled for 2022-23.

“People will naturally be sceptical given the development’s history, but we just have to ensure that we do what we say we will,” says Hunter. “We are focused on delivering a morning, noon and night scheme to facilitate a flow of people within the area.”

North West Markets: ambitious plans along the Mersey and beyond