Newcastle set to give Whey Aye observation wheel a spin

Last May, the World Wheel Company raised a few eyebrows when it unveiled plans to erect Europe’s tallest observation wheel on Newcastle’s quayside near the famous Millennium Bridge. 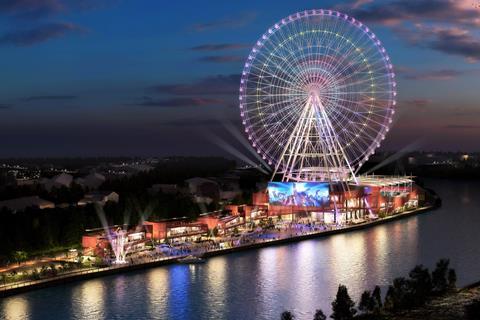 The 140-metre wheel, dubbed the Whey Aye in a tongue-in-cheek reference to the London Eye, would tower over the city.

There was scepticism in some quarters about whether the North East’s tourist economy could support the £100m investment. But Phil Lynagh, chief executive of World Wheel Company’s Newcastle operation, insists the project will be financially sustainable.

“We started looking at how we could combine a giant observation wheel with food and beverage and entertainment experiences in one location around nine years ago,” says Lynagh. “We’ve looked at potential locations and potential partners all over the world. When we found the place in Newcastle it was absolutely ideal.

The Whey Aye – a name Lynagh would like to keep although he admits it has had a ‘Marmite’ effect locally – is part of a wider project known as The Giants on the Quayside, a reference not just to the size of the observation wheel but to the Geordie Giant, a 12-metre statue that will welcome visitors. The project will also include food and beverage units and a 700 sq m LED screen.

The Whey Aye in comparison to other North East landmarks

A planning application for the project was submitted just before Christmas and Lynagh is hoping for a response from Newcastle City Council in March. If given the go-ahead, the plan is to open the attraction in late Q4 2020 or “Q1 2021 at worst”.

Lynagh says World Wheel Company will not need public money to fund it and that “we have a memorandum in place for a large chunk of debt finance”. The point of the project, he says, is that it can wash its face commercially and provide a jobs boost to the area.

“We’re weighing up our options between debt finance and private equity,” Lynagh says. “The council isn’t involved in terms of funding or guarantees, which is very important. A lot of development happens around council support these days, but we are committed to drive this ourselves.”