Big changes are afoot in Scotland thanks to a new planning regime that is set to affect developers, investors and agents alike. 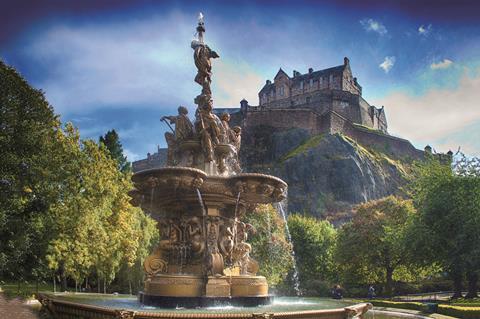 Edinburgh: affordable housing requirements will rise from 25% to 35% under the Edinburgh Choices for City Plan 2030

Edinburgh and Glasgow have both set ambitious climate targets that developers will have to meet if they want planning permission. The country’s capital is also considering introducing affordable housing targets that could see current requirements jump from 25% to 35%. And planning fees are set to double as Scotland’s national planning bill — passed into law last summer — comes into force.

So what exactly do the changes entail and how will they impact the property industry?

The proposal that has received the most vocal opposition from the property industry is outlined in Edinburgh’s Choices for City Plan 2030.

The plan to increase the provision of affordable housing requirement from 25% to 35%, which is in consultation until the end of this month, would affect all residential developments – including conversions – featuring more than 12 residential units.

Opponents fear it will hinder rather than help the city deliver the right level of affordable housing.

“It’s all about viability,” says Will Scarlett, founder and director of Scarlett Land and Development. “If you’ve got to provide 35% affordable housing, your BTR development is less viable.”

Scarlett and his firm have been working with developers including Platform_, S1 Developments and Legal & General, as well as Summix Capital Limited on a variety of BTR and purpose-built student accommodation (PBSA) schemes.

“As far as BTR is concerned, we want to continue the momentum and positive work that has been achieved over the past two years,” says Scarlett.

In those two years, BTR has emerged as “a key new residential use class” in Scotland, according to Rettie & Co. The firm’s latest research shows that in Edinburgh and Glasgow, the BTR pipeline grew 13% between spring and autumn last year to more than 5,900 units.

“This is driven by a rising rental market and socioeconomic changes, in the overall context of weak housing supply,” the firm says.

New affordable housing requirements are “going to remove some of that momentum and it’s going to put viability under pressure once again,” says Scarlett. “BTR viability should not be taken for granted.”

Increasing the affordable housing provision “has significant implications for our industry,” agrees Robin Blacklock, chair of the Scottish Property Federation and managing director at the BTR specialist Dowbrae Property Consultancy.

“It’s restricting the rate of development. BTR could be a significant factor in delivering more homes more quickly,” he explains.

Both Blacklock and Scarlett say housing and affordable housing targets in Edinburgh could be revised upward after the Scottish government took control of them under the new Planning (Scotland) 2019 Bill it passed last summer.

For the first time, the central government will now set the goals all local authorities in Scotland need to meet.

The targets have not yet been released and consultations are ongoing as the government drafts the fourth National Planning Framework (NPF4).

Edinburgh City Council has pledged to deliver 20,000 affordable homes by 2026, but Scarlett and Blacklock say development could slow if projects aren’t viable.

Edinburgh’s council did not respond to questions about the impact its affordable housing requirements would have on meeting these targets.

Kevin Smith SMP, Scotland’s planning minister, says “it would not be appropriate for us to say anything” about the council’s proposal to hike affordable housing, lest it “prejudice” the process. He points out that during the current parliamentary period, the government will invest £225m in affordable housing in Edinburgh.

The council’s policy proposals will also impact PBSA. The plans would make it statutory for new PBSA developments with sites larger than 0.62 acres to reserve 50% of their plans for housing – with hotels, short-stay commercial accommodation, other commercial business, retail and leisure developments also affected. On top of that, only 10% of PBSA developments would be allowed to be studio flats.

“Why control the mix if there’s market demand for studio flats?” asks Scarlett. “The other issue with that is you’re going to have schemes coming forward where residential owner-occupiers are living cheek by jowl with students. It can work, but is that what people want?”

Property industry representatives say the policies could lead Edinburgh to under-deliver on its housing targets by deterring developers and investors from building schemes there because they aren’t financially viable.

The Scottish government has a substantial amount of work to undertake

“As an industry, we understand what they’re trying to achieve,” says Blacklock, “but it could have unintended consequences”.

Consultation on the overall housing targets local authorities will need to meet is scheduled to wrap up at the end of March. A draft document is expected in September, ahead of the policy’s adoption in 2021.

“This presents an opportunity to streamline planning for housing and to create a consistent and transparent platform that can free up planning authorities and stakeholders to focus on delivery and the creation of quality places,” says Stewart.

These consultations demonstrate 2020 is all about “putting the meat on the bones” of the planning bill, says Tony Aitken, head of planning at Colliers international. “The Scottish government has a substantial amount of work to undertake,” he says and the bill “brings substantive changes in planning.”

Another of those changes surrounds the Scottish government looking at options to “radically accelerate the reduction of carbon emissions,” says Stewart. The new national planning framework will outline how developments will contribute to meeting Scotland’s climate targets.

“Until it is adopted, it won’t affect existing developments, but once adopted it will form the key basis on which planning decisions are made,” says Stewart.

Scotland has committed to reaching net-zero carbon emissions by 2045, and language in the 2019 planning bill indicates new developments will need to be in line with those commitments.

On top of that, Glasgow and Edinburgh are battling each other to be the UK’s first city to hit net-zero carbon emissions. Last year, Edinburgh City Council pledged that the capital will become carbon-neutral by 2030 and in its policy proposals, the local authority says it wants “all buildings through their design and the use of low and zero-carbon generating technologies to be carbon-neutral”.

Carbon neutrality “will loom large in the national planning framework,” believes Colliers’ Aitken, who states some “not insignificant schemes” in the planning appeal process would not be up to standard.

Demand for buildings to meet these standards is also coming from tenants at the moment, says Simon Capaldi, a partner specialising in occupier services at Knight Frank in Edinburgh. “Larger corporates all have green clauses in their lease,” he says, noting developers and landlords will need to deliver one way or another.

Whether it is the tenants, developers or landlords, someone is going to have to pay for the delivery of these greener buildings, says Scarlett.

“Everyone is signed up to the need to reduce carbon emissions – but it will come at a price,” he points out. “Either the end-user pays for it, or the developer with a reduced margin, or the landowner.”

In addition to these concerns, planning fees are set to double in Scotland under the planning bill. In mid-February, consultation ended on the performance of Scotland’s planning system and fees.

In 2017, the maximum planning fee was increased to £125,000 and this is now set to double to £250,000, says Aitken, who notes that “in certain parts of Scotland, such as areas where building is less commercially viable, it could have an impact”.

Aitken and other industry representatives say they want those fees ring-fenced by the government so local authorities are required to plough the money back into improvements in the planning system and the processes that grease the gears of planning approvals. The fact it isn’t right now is “the bit that’s unpalatable to developers,” he says.

In a letter submitted to the government as part of its consultation the SPF wrote: “SPF members have previously indicated a willingness to pay a higher planning fee for a tangible improvement in performance by planning authorities. Unfortunately, we have yet to see full commitment by planning authorities to tie fees to better outcomes in the way that’s needed.”

Members of the SPF will learn if the government has heard their concerns when the draft policy is released in May or June.

The fees hike, requirements for new buildings and development to meet climate standards and new affordable housing requirements are just a few of the major policy changes that are being hammered out and put into place this year. The Scottish property industry will be maintaining a watching brief to see how things pan out.