Southampton’s Ocean Village marina has a new jewel in its crown following its stalled post-recession redevelopment. The Harbour Hotel, shaped like a ship to echo the city’s links with the ocean liner business, is a symbol of the prospects for the buoyant - and increasingly affluent - city centre. 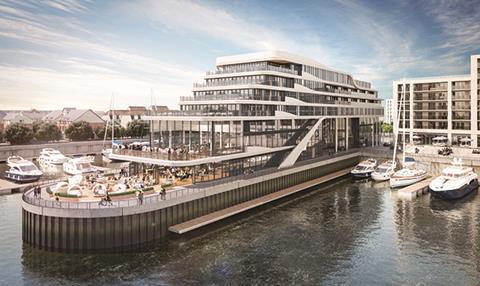 The Harbour Hotel is a symbol of Southampton’s prospects

The £25m hotel has 85 bedrooms, a spa, a gym, a swimming pool, restaurants and a rooftop champagne bar. It is a key part of the £65m redevelopment of the marina, being undertaken by Nicholas James Group and includes 82 residential apartments, as well as commercial and retail units.

The scheme, which will be complete by the autumn, is just one of a wave of residential and leisure developments that have either recently launched or are in the pipeline in a city that, for a long time, flew under the radar.

So what has Ocean Village done for the transformation of the city? And will Southampton’s booming residential sector continue to grow?

The site, which remained underdeveloped for years, is the last chunk of the city centre’s waterfront left for development.

“There is pretty much no other place in Southampton city centre with access to the waterfront,” says Kevin Marsh, director of licensed leisure at Savills. “Although the city has lots of ocean frontage, almost all of that is taken up by docks, so accessibility is pretty minimal.”

Increasing demand from visitors, coupled with the location of the site and seaside views, meant a hotel was a natural fit.

According to David Ramsay, director of planning and development at JLL in Southampton, there is a clear demand for a five-star hotel in the city, which should find an eager, affluent clientele that includes embarking or disembarking cruise passengers.

“There are a lot of budget hotels in Southampton and there is a need for something a bit more high end. This meets that need,” he says. “The De Vere nearby is four-star and to get higher you need to go outside the city, so this will corner that market. It’s a good plan that fits the geography of the city well, being next to the port.”

“We are offering a spa, a boat that takes guests to Yarmouth for lunch and a cool bar offering with views of the sunset from the Needles to the New Forest. It creates a whole lifestyle opportunity that never existed in Southampton before.” 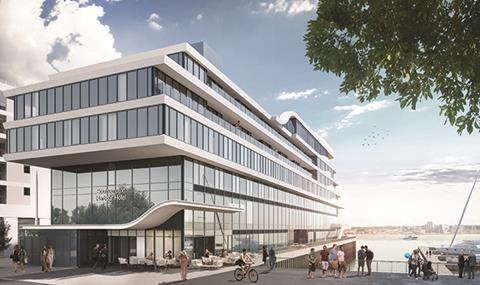 The scheme comprises two- and three-bed duplexes and triplexes, with the first occupiers set to take possession in September. It is the last significant residential development in the marina basin and 60% of the units have already been sold. Of the apartments that are still available, prices range from £450,000 to £1.2m.

The mood is buoyant in Southampton. It’s a good market - David Ramsay, JLL

The launch of Alexandra Wharf follows that of 299-apartment Admiral Quay scheme, which opened in 2014 and is commanding higher prices, says Alan Watt, head of south coast residential development sales at Savills.

“They are turning the dial for waterside apartments in Southampton, with views into the marina one way and out to the river the other way,” he says. “There’s strong interest coming from typically two market sectors: down-traders and ambitious younger owner-occupiers who want decently specced, larger apartments.”

This has been fuelled partly by ever-more expensive property prices in sought-after nearby towns such as Winchester, which are making Southampton a more affordable choice. Commuters are also attracted by its transport links, with direct trains to London taking one hour and eight minutes.

Ocean Village is already serving as a catalyst for other residential-led developments on the doorstep. “It has given a real air of confidence to developers of other schemes in the area, including the 101-unit Royal Crescent at the entrance to 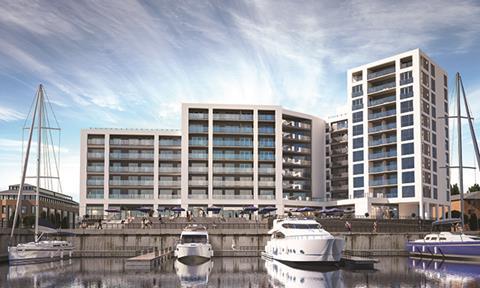 More residential and leisure projects are in the pipeline

Ocean Village, which is more than 50% pre-sold with an expected completion before Christmas,” Watt says. “Some of the old warehousing along Canute Road is also being released and will yield about 70 units.”

Watt also notes that 50 units have already been sold at a 300-unit housing scheme on the old Meridian TV site, which launched in January.

The appeal of Southampton’s residential sector has been further buoyed by developments such as WestQuay Watermark, the recently completed Hammerson restaurant and leisure scheme adjacent to its Westquay shopping centre, as well as the wealth brought into Southampton thanks to the 1.6 million cruise passengers who descend on the city every year to shop and dine.

The cultural quarter in the north of the city centre - a joint venture between Grosvenor and the council - which includes an arts centre, theatre and gallery, has also lent Southampton a more cosmopolitan feel.

“The city feels quite prosperous at the moment,” says Watt. “There are various projects coming through planning and all are selling well.”

The increase in development activity isn’t exclusive to the city centre. “It’s bounded by two rivers and whereas a lot of cities have seen their marine industry decline, that has not happened here,” explains Marsh. “The actual land mass available for development in the city centre is relatively small.”

This scarcity of developable land is opening up sites elsewhere in the city. “There’s lots of housing development going up, PRS especially,” says Marsh. “There is pressure for high-rise and the council is supportive in the right locations.

It’s a good market. I do question if there is a ceiling for the number of flats in the city but we’ve not reached it yet.”