When most people think of Dover, two things come to mind: white cliffs and ferries to France. The town centre doesn’t really come into the equation – but that is changing. 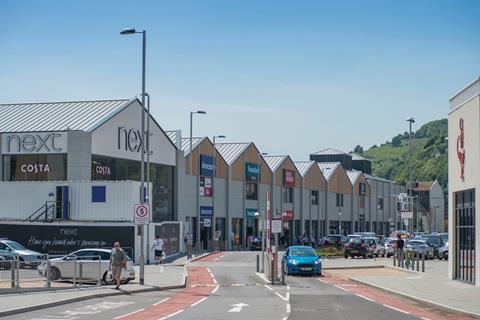 St James Dover, which opened in March, is helping to breathe new life into the town. Built on the site of a 13-storey office block that had stood empty for a decade, the 157,000 sq ft scheme sits between the town centre and the A20, which leads to the port, and is just a stone’s throw from the £200m Western Docks development, plans for which include a new marina, shops, bars and restaurants.

“[St James is on] a very large footprint close to the waterfront. I don’t think we’d seen a site in such a good location in a worse state,” says Neil Crawford, head of retail and leisure development at Legal & General Investment Management Real Assets, which delivered St James in collaboration with Bond City and Dover District Council.

The council had used compulsory purchase orders to assemble the land and had been trying to facilitate development on the site for more than 20 years. In that time, it had gone through various iterations.

“We focus on urban regeneration and this fitted the mould. We recognised that it had great potential”

“There was a false dawn about 10 years ago,” says Keith Morris, leader of Dover District Council. “Asda had been keen to build a superstore on the site but pulled out in 2008 as a result of the downturn. We were back to square one. We began looking for a development partner who believed in the site to bring it forward.”

Bond City had been involved since 2002, when it was selected as the preferred bidder for one of the earlier iterations, but a partner with the means to invest was needed to back the scheme.

L&G agreed to forward-fund the project in 2015, by which stage Bond City had begun to clear the site.

“We did a lot of research on Dover,” says Crawford. “We found the local authority was a proactive one and the wider piece was attractive – the ferry and cruise terminals, the growth in housing, etc. We focus on urban regeneration and this fitted the mould. We recognised that it had great potential.”

Fast-forward three years and much of the retail park is open. Retail tenants include Marks & Spencer (which previously traded from a unit on the high street and had planned to leave Dover before committing to St James), Next and new Iceland concept The Food Warehouse. 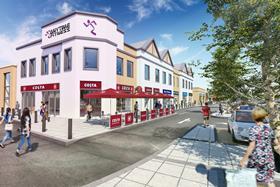 The 17 retail units range from 1,200 sq ft to 17,000 sq ft and 10 of the retailers are new to the town. The scheme also includes a six-screen Cineworld cinema, six restaurants, an Anytime Fitness gym and a 108-bed Travelodge hotel.

The scheme was 85% pre-let and a further 10% is under offer. A few smaller units remain available but Crawford expects the scheme to be fully let in three to four months.

“St James has given visitors who previously headed straight for the ferries a reason to come into the town centre and explore the shops,” says Tim Hance of HRH Retail, joint retail agent on the scheme with JLL. “It has encouraged residents who previously travelled to neighbouring towns to stay in Dover. And it’s created an evening economy.”

Morris says St James is already having a positive impact on the town. This is backed up by footfall figures showing a 77% increase between the week after Christmas and the week after Easter, the month following St James’s launch.

Now, rather than drive past the town centre on the way to the port, some of Dover’s 30 million annual ferry passengers will have somewhere to stop on their way to France.