The art of finding studio space

The gulf between the glittering riches enjoyed by the likes of Damien Hirst and the average income of artists is enormous. 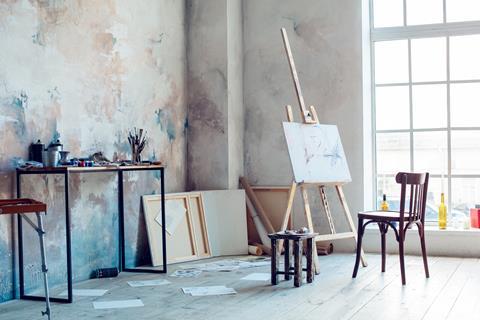 According to the latest research commissioned by Arts Council England, only 7% of artists earn £20,000 or more a year from their art, while 36% earn less than £1,000 – the average is £6,020. Of course, the majority of artists do supplementary work but even so, overall earnings are pitiably low, with the total average income for artists standing at £16,500.

It is no wonder then that cheap studio space is a necessity. Finding it is difficult across the country, but it is particularly tough in London. So what is being done to increase the provision of affordable space?

The Greater London Authority (GLA) knows that part of what makes the capital such a vibrant, attractive global city is a thriving arts scene and it understands it needs to be protected. As a result, the GLA has been tracking the provision of affordable artists’ studios for a number of years.

The first report on this issue – published in 2016 – sought to identify trends using 2014 as the base year. A follow-up report was published in 2018 and a further study is expected to be published in the summer. The last report found that 67% of studio sites identified as being at risk in 2014 had closed by November 2017. What’s more, it stated that the risk of closure remained high and 24% of sites identified as at risk in 2017 would close within five years.

Part of the problem is that it is increasingly difficult to find redundant industrial buildings that cannot either be put to more profitable use than an artists’ studio or knocked down and replaced. That is a near-fatal blow to affordable studio providers’ traditional business models.

“Our model has been to find an industrial space a landlord has no use for and offer a low-cost rent, borrow money to fit it out and pay back the borrowing over say a 10-year lease period,” says Tom Holley, chief executive of the Association for Cultural Advancement through Visual Art (ACAVA).

“At the end of that lease, if the landlord still didn’t have a use for the building – which used to happen a lot – we would carry on for another 10 years. In that second 10 years, renting out space provided a decent surplus and made for a viable model.”

But today, says Holley, it is harder to get longer leases because landlords know that they can develop that property.

“Landlords are telling us there is a break clause in a couple of years and they are going to execute it because they know they can develop,” he adds. “There is so much demand for housing and regeneration is going on at such a frenzied pace that we’re not getting the longevity in buildings that we need.”

Richard Kingsnorth, co-director at studio provider ACME, agrees the problem has worsened in recent years. “Before, there were always affordable areas of London, but they don’t really exist anymore. There’s nowhere you can go where space isn’t being used – it’s always owned by someone for financial speculation.”

When Holley took over as chief executive of ACAVA around 18 months ago, he soon learned that the organisation was in trouble. “I had to approach our bank for an overdraft facility to manage a cashflow forecast that looked quite bad,” he says. “To get that, they insisted that I increase our income from our studios.”

Holley was forced to put up rents at various sites by around 20% on average, which predictably did not go down well with the artists affected.

The traditional relationship between developer and creative is inherently adversarial

As well as raising rents, Holley has been forced to revise ACAVA’s business model. Increasingly, that means sourcing space on the edge of London or outside the capital. It also means working more closely with developers. “The only opportunities that seem to be coming along at the moment in London are parts of other property developments, whether that’s residential, commercial or mixed-use,” says Holley.

Such opportunities with developers can be quite short term. For instance, ACAVA is managing a converted factory in Harrow, made possible via a Section 106 negotiation and supported by GLA funding. It provides around 20 affordable studios and a small gallery. The lease is coming to an end, however, after which the landlord is expected to ask for a market rent. At that point, ACAVA will have to walk away.

Partnering with developers does work for some studio providers. ACME, for instance, has been active in the capital for several decades and has built up a portfolio of long-leasehold and freehold properties. That has given it the equity to access finance to invest in further long leaseholds, typically 99 to 125 years, on elements of mixed-use schemes.

“We started looking at mixed-use schemes in 2005 in a partnership with Barratt to provide 50 studios in Southwark,” says Kingsnorth. “Since then, we have done another five buildings. Ordinarily, the developer comes to us, for a number of reasons.”

For instance, if a developer is knocking down a factory as part of a project, there may be a planning requirement to provide replacement employment use as well as new housing. In such cases, ACME can be an attractive partner.

“We have a track record of being able to provide certainty in a number of ways,” says Kingsnorth. “We can guarantee occupation for a start. We have 1,200 people on our waiting list, so we know a building can be fully occupied within a month. Working with us can guarantee a pre-sale, rather than developing speculative ground-floor spaces.

“We’ve got good equity because we own a number of buildings. We’ve been with Lloyds since we started, so have finance ready to go.”

Another successful studio space organisation is Studiomakers. Set up around four years ago by the Outset Contemporary Art Fund, the organisation was originally established as part of a campaign backed by the GLA, among others, to persuade developers to include a small number of affordable artists’ studios in their projects. Since 2016, this project has helped provide 60,000 sq ft of studio space, largely in ‘meanwhile’ spaces.

Outset also helped launch the Creative Land Trust (CLT), an initiative to raise funds for investment in freehold property, ensuring that the studios created could be maintained as affordable space in perpetuity. The CLT was formally established a year ago after attracting substantial backing from the GLA, Arts Council England and Bloomberg Philanthropies, and is now fully independent of Outset.

“It’s been set up as a completely separate entity with its own employees and is looking to buy its first building this year,” says William Austin, Studiomakers project manager at Outset.

“The traditional relationships between developer and creative or landlord and tenant are inherently adversarial and quite negative,” explains CLT co-chair Alex Notay. ”The increased focus of the property industry in recent years on true long-term placemaking as a core component of value creation give us a real opportunity through the CLT to stem the tide of artists being priced out of London. We want to take a more holistic approach to providing secure and affordable spaces working across the creative, property and financial sectors, which are historically siloed from one another.”

Studiomakers believes it has spotted another opportunity. It will continue to negotiate ‘meanwhile’ spaces for artists’ studios, but is now focusing on taking advantage of a change to planning policy in London.

The draft London Plan drawn up by the GLA states that planning obligations can be used to secure affordable workspace in developments, including space “dedicated for specific sectors that have cultural value, such as artists’ studios and designer-maker spaces”.

The suggested proportion of space is 10%, but the GLA is leaving it for individual boroughs to draw up policies that meet the needs of their local areas.

“Each borough has its own way of looking at this and we are helping boroughs write that up and guide them on how best to achieve it,” says Austin, whose work providing space in Southwark was an inspiration for the GLA project.

“Once policies are in place, Studiomakers won’t run the sites. We will just advise and guide people through the planning process, then find a provider to manage the space.”

Austin thinks the initiative is a huge opportunity, even if it is not aimed exclusively at providing studio space. But he warns that different boroughs are approaching their policies in radically different ways.

“A good bad example is Tower Hamlets – they’ve passed their policy and defined affordability as 90% of market rates,” he says. “If you think about affordable housing, the same issues apply. If you tried to get away with a new housing policy that said 90% of market rent is affordable, you can imagine the backlash. It’s pointless. But Lambeth is defining it as an 80% reduction on market rate in one of their zones.”

Outset has already been approached about rolling out its ideas across the country and has ambitions to expand internationally. Given the failure of the established model to provide affordable studio space in competitive property markets, falling back on the planning system may well prove to be the most effective alternative.