Torwood Street scheme set to be catalyst for Torquay development

Decades of under-investment have left their mark on the once-thriving seaside resort of Torquay. 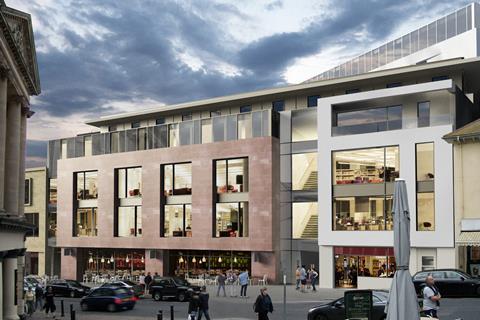 A stretch of dilapidated buildings between the Apple and Parrot pub and Roma hair salon in Torquay’s Torwood Street was symbolic of the area’s struggles. But with work under way on a long-delayed £32m mixed-use scheme in Torwood Street – a project that forms part of Torbay Council’s wider town centre regeneration programme – could the prospects of the English Riviera be set to change?

Torwood Street, once the heart of the town’s economy that blossomed as a holiday spot for Britain’s rich elite, had fallen into disrepair but there was hope when, in 2009, hoardings started going up on the empty buildings in preparation for a new mixed-use development.

The scheme, by Ted Baker founder Ray Kelvin’s THAT Group, never materialised in the wake of the financial crisis and negative feedback from English Heritage and locals over the impact the proposed 10-storey hotel and luxury apartments would have on the town’s skyline.

Now the developer is back with a revised scheme that it believes could help bring the seaside town back to its former glory.

“It’s been a challenging scheme in this market and we’ve come up with a range of ideas since we acquired the site, but this one really is the winning mix – nothing can truly rival it in the town centre,” says THAT Group director Peter Tisdale, brother of former Exeter City manager Paul. “It has been a long road to here, but we are looking at the long term and are pleased to finally get going.” 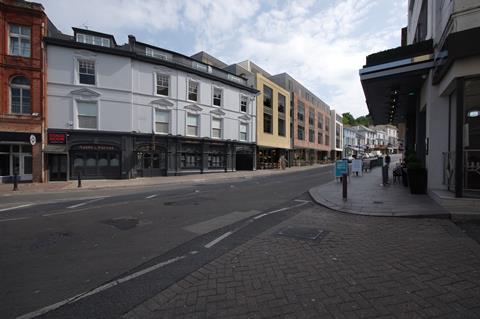 The current view down Torwood Street

The proposed scheme is anchored by a seven-storey, 130-bed Hilton hotel, which will sit alongside 30,000 sq ft of grade-A office space. Property Week can confirm that 50% of the office space has been pre-let to solicitors Wollen Michelmore and Tisdale says there has been “lots of interest from potential occupiers” for the remaining 50%, which will be let either as a single unit or multiple units.

John Kinsey, JLL’s lead director for the South West hotels and hospitality team, says the scheme is the “first of a new generation of higher-quality office space in the town”.

Tisdale agrees that it will be a catalyst for further development in the town. “If you do one development, it’ll have a domino effect and set a benchmark,” he says. “Now other schemes in the town that have been talked about for a while are seemingly ready to take the next step.”

Several projects are already under way including the renovation of the four-star Palace Hotel by Singapore’s The Fragrance Group; the creation of 16 luxury apartments in an office-to-resi conversion of Commerce House; and a new 120-bed hotel on the former Harbour View car park – funded, designed and built by Torbay Council, which part of  will invest a total of £25m into that and other schemes. Council funding also helped get the Torwood Street scheme off the ground.

“The council stepping up to provide funding has been central to the success of [the Torwood scheme],” says Tisdale. “A council that is supportive in terms of actions as well as words is what every developer asks for and that’s exactly what we now have in Torbay.”

Pat Steward, town centre regeneration programme director at Torbay Council’s wholly owned economic development arm TDA, adds: “The council was fed up with seeing a number of major schemes be delayed so decided now is the time to act – using its borrowing ability and developing its assets to stimulate regeneration. The council has taken a blended approach investing inside and outside the bay. We believe the development at Torwood Street will be a turning factor for Torbay. It’s a scheme that really links together the town, alongside the £3.5m improvement to The Strand area. The success of Torwood Street can help kick on further investment.”

With the 22-month construction programme under way, Tisdale expects the scheme to be complete by summer 2020.

Spencer Wilson, partner at Cushman & Wakefield in the south west, said: “The long awaited development is fantastic news for Torquay. It will further boost Torquay’s tourist economy and give the council confidence to push forward with their wider regeneration plans. This combined with Harbour Hotels proposals to turn the historic Pavilion building into a 60 bedroom luxury hotel & spa, will help to transform Torquay’s iconic marina.”

Local people and stakeholders alike will be hoping it signals a new dawn for Torquay and will see the sun rise on a new look for the one-time jewel of the English coastline.