Newport's fortunes on the up in wake of Friars Walk project

The opening of Friars Walk shopping centre in Newport in 2015, after years of delays, was accompanied by much pomp and ceremony. There were speeches from assorted dignitaries, local celebrities were drafted in to open shops and the staff of the new TGI Fridays even danced a haka. 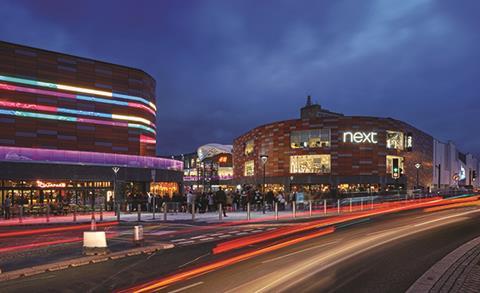 Friars Walk was ”a huge leap forward” for Newport

Built by Queensberry Real Estate and supported by a £90m loan from Newport City Council, the centre was seen as a huge leap forward for the regeneration of the city. So three years on, what’s changed?

“When we initially achieved planning consent for our regeneration of Friars Walk, Newport city centre was in total decline,” says Queensberry chief executive Paul Sargent. “It was suffering from retailers relocating out of town and closing-down sales had become the norm on the city’s historic high street. Newport’s F&B [food and beverage] offering was non-existent and there was no quality leisure offer or night time economy.”

Sargent says the opening of Friars Walk “completely transformed and reinvigorated the city” and created 1,200 jobs worth an estimated £20m a year in salaries. None of this would have been achieved without the “ground-breaking” private-public partnership between Queensberry and Newport City Council, he adds. “The scheme acted as the catalyst for a wider inward investment drive that attracted £400m worth of city-wide investment,” he says.

Indeed, a number of major projects have been completed or are on their way following the opening of Friars Walk. “Newport City Council always made clear that Friars Walk was just part of the regeneration jigsaw for the city and was not the whole story,” a council spokesperson says.

Off the back of Friars Walk, the council made a successful bid to the Welsh government’s Vibrant and Viable Places programme for £15m of funding, which was subsequently boosted by a further £45m of investment by the private and voluntary sectors. The money was then used to revamp several key city-centre buildings, including the vacant King’s Hotel on the high street, to provide new homes and spaces for businesses.

Fast-forward to the present day and it is clear that the regeneration of Newport continues apace. Earlier this year, the council published a masterplan for the city centre, providing a framework for its continuing redevelopment. Since then, several schemes have come forward that take advantage of the plan. 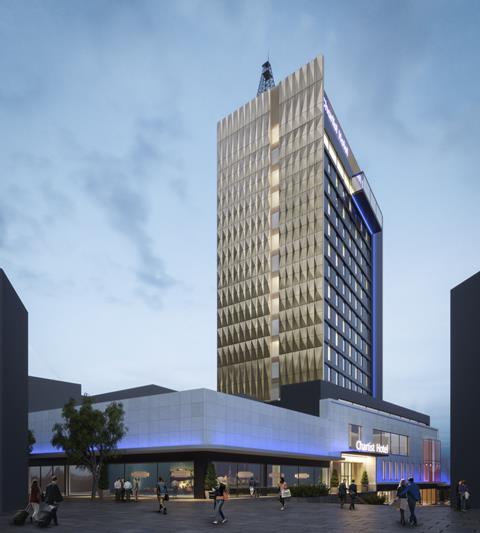 The Chartist is set to become Newport’s tallest building

For instance, Garrison Barclay Estates is in the midst of redeveloping The Chartist Tower, Newport’s tallest building and home to its former BHS department store, into a Mercure hotel and 30,000 sq ft of offices.

Meanwhile, in July, the council’s cabinet gave its backing to a £12m proposal to revitalise the council-owned Newport Market. That project is being led by The Loft Co, which has transformed Cardiff’s Tramshed and the Jennings Building in Porthcawl and is a specialist in SME incubation and community spaces.

The Loft Co plans to transform the market into a mixed-use space that will feature a tech hub, apartments and a performance space, while retaining market units and a food hall.

Elsewhere in the city centre, local developer Richard Hayward Properties is redeveloping Olympia House, the former home of the Passport Office, into a scheme with retail and residential elements. The company’s founder and director, Richard Hayward, says that he has secured Sports Direct and Newport’s main Post Office as tenants for the lower floors and that the scheme is already having an impact.

“The Post Office produces footfall of 6,500 people a week for the traders in the area and moves the centre a bit,” he says. “The shops around there are all regenerating themselves now, which is really good news for the town. We’ve also let one of the cafés and there will be another two shops, so there is a lot of regeneration going on.”

The upper floors of Olympia House are being converted into 62 flats and Hayward says values have increased substantially since construction started on the project. “We started off at about £120/sq ft and we’re now at £180 or even £200/sq ft,” he says. “We’ve sold all the flats on the top floor and that’s the only floor we’ve really tried to sell.

“We’re now going down to floor seven and I think we will sell those quite easily. And then we’re selling another 11 flats beyond that. So we will have sold 30 or so flats and the rest we will keep and put into our rental stock because we think they’re great investments.”

Olympia House is set for practical completion in February, after which Hayward says he will move on to further city-centre residential projects. The success of the off-plan sales at Olympia House has given him the confidence to do more, he adds. 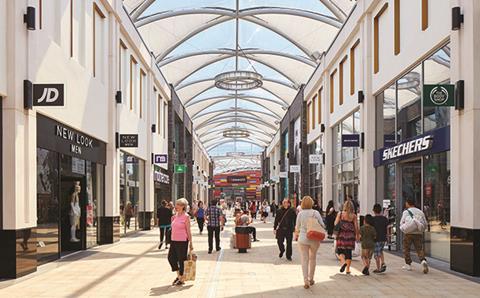 “We’re planning to do another 40 flats in the old Argos building once we’ve sold the Olympia House units,” he says. “It’s a great time for Newport. Flats have never really worked in the town and this is the first time that we’ve been able to sell right in the city centre. You’ve got real city living in Newport as a result of the major commercial developments that have happened, such as Friars Walk.”

Newport is also set to benefit from several improvements to its connectivity. In January, VAT was removed from Severn bridges tolls and in December the toll is due to be removed entirely, providing a boost to hauliers and Newport’s status as a key entry point to the Welsh market.

“It will be free to come and go between England and Wales across the two Severn bridges,” says Chris Sutton, lead director, Cardiff, at JLL. “That will open up south-east Wales to distribution activity that has been so strong in Avonmouth. Millions of square feet are being built either side of that road. The tolls do make a material difference.”

Newport could also be set to benefit from a new relief road for the M4 motorway, which acts as the main arterial route for around two thirds of trade into and out of Wales and suffers from chronic congestion. The relief road was the subject of an 18-month public inquiry, at a cost  of £11m, and the final report was released to the Welsh government – but not the public – last month.

If it emerges that the report recommended that the road should be built and the Welsh government agrees, borrowing powers are available for up to £1bn of the project’s anticipated £1.3bn cost from the UK government. One source says: “It is understood that the additional £300m is the subject of negotiation. There is a conversation going on about extending those [borrowing] powers.”

Another transport improvement in the offing is the electrification of the Great Western Railway, which is due to be completed next month, although one local property consultant is sceptical about whether it will happen on time. “Let’s just say it has gone very quiet,” he says.

When the electrification is complete it will provide faster links from Newport to Cardiff and London, and both developers and the public sector are gearing up to take advantage.

A new park-and-ride railway station on the mainline just outside Newport in Llanwern has been approved and had funding allocated by the Welsh government. The site was previously home to the Corus steelworks but was left largely abandoned when the company pulled out in 2001. In 2003, developer St Modwen acquired the 600-acre site and drew up plans for the area.

The key elements, both of which benefit from the new railway station, are the 100-acre Celtic Business Park and 500 acres of residential land dubbed Glan Llyn. For the latter, St Modwen has planning permission for 4,000 homes, of which around 700 have been completed so far.

However, in terms of economic development, the business park is far more important. So far, St Modwen has completed two developments at Celtic Business Park. The first, a 48,150 sq ft speculative unit, was let to Amazon Logistics soon after it was completed, at £5.50/sq ft. The second was built for Spanish train manufacturer CAF and completed in September. The company will use the facility to build trains for the Metro Project – the electrification of the railways up into the South Wales Valleys.

According to Sutton, the success of the early phases and the promise of the new station have encouraged St Modwen to push ahead with further speculative development at the business park.

“They’re now looking at speculatively developing a further two units,” he says. “It’s going through the planning process and will be good because south-east Wales has had relatively little in the way of spec development. It’s always been a structural issue for south Wales.”

Another development under way is the International Conference Centre (ICC) Wales, which is being built next to Celtic Manor outside Newport. The £84m development, a joint venture between Celtic Manor and the Welsh government, is set to open next summer and has already provided £22m of contracts to local construction firms, with a further jobs boost promised when it becomes operational. 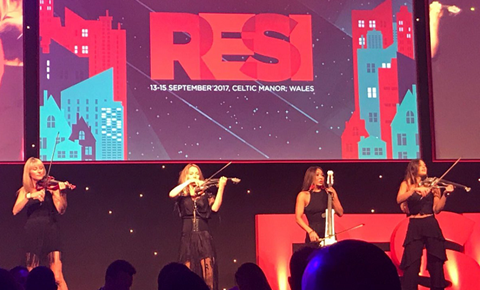 Welsh government economy secretary Ken Skates describes the ICC as “an excellent example of what can be achieved through collaboration between Welsh government and the private sector”.

After years in the doldrums, Newport’s fortunes are on the up. The council’s decision to take a risk by backing the construction of Friars Walk paid off – and proved to be just the beginning of a concerted effort by both the private and public sectors to bring renewed vigour to the city’s economy.