With the steel superstructure for Cineworld now discernible above the hoarding of the expansion of Intu Watford, the shopping centre’s new leisure extension is visibly taking shape. 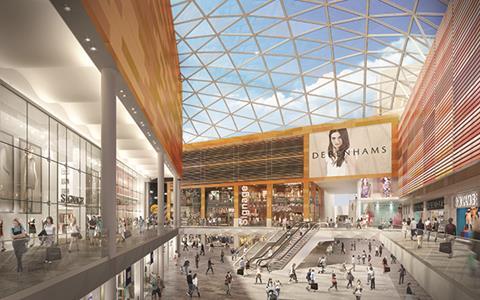 The centre will feature a Debenhams

Intu - then Capital Shopping Centres - developed the former Harlequin Shopping Centre in 1990 and added to its Watford portfolio in 2013 with the acquisition of Charter Place, an open-air shopping centre built by Watford Borough Council in 1976.

By September 2018, the two centres will be combined, creating a 1.4m sq ft shopping centre with space for two new anchors - Debenhams, the town’s second department store, and a nine-screen Cineworld cinema - along with 10 restaurants and 16 shops.

With 18 months to go before the new and improved centre is unveiled, how is the development progressing?

Having started in November 2014, construction work has now reached the halfway point. Around 60% of the space has already been signed for and leasing activity is gearing up. All but two of the restaurants have been let (and one of those is in solicitors’ hands), a third retailer is about to sign and a 20,000 sq ft leisure unit is expected to be taken by a bowling operator imminently.

In addition to the deals for the anchor units, lettings performance has been boosted by H&M and New Look. H&M is moving out of its old unit at the centre into a new one of 22,000 sq ft. Retailers have already shown an interest in its former unit, which could be reconfigured to suit various requirements.

New Look, which was once in Charter Place and is now temporarily in the existing part of Intu Watford, will lease 11,800 sq ft in the extension. 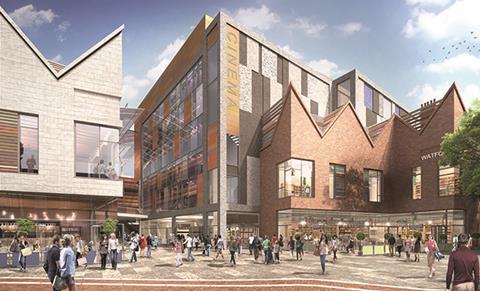 The centre will feature a Cineworld cinema

However, Howard Oldstein, Intu’s regional centre director, does not envisage a mass migration of retailers from the old into the new.

“We want this to be known as one big centre,” he explains. “Our key anchors will be spread, rather than generate all the footfall at one end.”

At the eastern end of the old centre furthest from the new development stands John Lewis. It was brought in to anchor the original centre as Trewins, a local department store that had been in business since 1880. It wasn’t until 2004, many years after it had been acquired by the John Lewis Partnership, that its name was changed to match the other stores in the portfolio.

Charter Place, which housed mainly discount retailers, has been partly demolished. Today, its replacement is shielded behind a hoarding that runs along the high street from number 29, a still-vacant former BHS store, to number 83, a Wilco that opened last year. Only the Victorian façade of a former bank that was last occupied by Poundworld remains.

By autumn next year, the high-street site will be home to 10 restaurants, the operators of which have a distinctly international flavour.

Those that have already signed up include: Thaikhun, a chain offering Thai street food founded four years ago and already established in 10 UK cities; and Cabana, a Brazilian concept founded by Jamie Barber and David Ponte in 2011. Other more established restaurant chains include TGI Friday, Yo! Sushi, Las Iguanas and Byron.

A pathway, nicknamed Meeting Alley, will connect the restaurants with the 400,000 sq ft canopy-covered extension, where visitors will find the Debenhams in a unit repurposed from the old market hall - a substantial local-authority-built space within Charter Place that will form part of the framework for the 113,000 sq ft department store.

The market hall basement will be used partly for servicing and partly for retail, enabling Debenhams to trade across three levels.

Rebecca Ryman, Intu’s regional director, recalls the enthusiasm with which the new unit was greeted by Debenhams.

“I was with the property director of Debenhams two weeks ago,” she says. “We went inside their unit and he was saying: ‘This is where our cosmetics will be. This is our click & collect.’ He was very excited.” 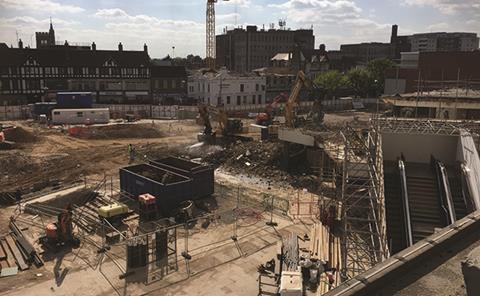 Shoppers can also expect changes to the existing units. Ryman says that many will be broken up into smaller spaces, but Oldstein also notes demand from retailers for larger units.

“What we are finding is that retailers want something bigger than boutique shops. They get more for their buck with a bigger unit,” he says, citing Apple as an example of a retailer in need of a bigger store.

Retailers want something bigger. They get more for their buck with a bigger unit - Howard Oldstein, Intu

To make way for the extension, the town’s market has been relocated north-westward along the high street to Watford House Lane, where its trading hours have been reduced and rents cut.

Ryman will not disclose the rents Intu’s new retail tenants will pay - she says it is difficult to compare the overall rent that retailers will pay for the new stores and the zoned rents of the existing centre - but she says they are in line with expectations.

When the extended centre is fully opened, there will be four ways to get from the old parts to the new, including entrances via the car park, but for now, the old centre comes to an abrupt end on its eastern edge while development continues on the other side.

An enclosed tunnel enables shoppers to get to the car park on the edge of the development site and customers who want to visit the existing centre are directed into it via Primark and Marks & Spencer on the high street.

“People understand that there will be some disruption. You have to explain what you are doing and why you are doing it,” says the centre’s general manager, Vicki Costello.

Ryman points out that when the enlarged centre opens, Watford will move up in CACI’s rankings to equal Edinburgh and Bristol. That, she says, is “not bad for a suburban town”. With 18 months to go until the upgraded shopping centre is opened, residents will be watching it take shape with interest.