Canterbury is set to be the first place in the UK to host a ‘dementia village’, after Corinthian unveiled plans for £15m specialist accommodation within its 4,000 home Mount Field Park scheme. 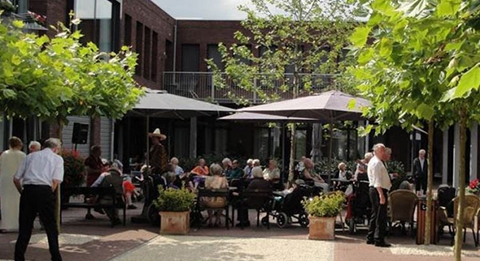 Based on the care concept pioneered at the Hogeweyk dementia village in Holland, the development within the city’s largest-ever housing site will sit on 15 acres of land to the south of Canterbury and cater for 250 people with the condition.

The village will comprise apartments, houses and a care center for those who are in the more advanced stages of dementia. It will also have its own cinema, convenience store, and café, with recreational areas like village squares and gardens

Simon Wright, the developer’s chief executive has been in talks with the bosses at the care home provider Avante, who have been to see the facility in Holland.

“Our village would be the first of its kind in the country” he said. “The scheme will require a separate planning application within the Mountfield Park development.

“Avante have the expertise to run it, but can’t afford to build it, so we will. We are looking at a variety of accommodation, including houses where up to six people who share similar interests could live with the support of a carer. It would also help prevent couples affected by the disease from being split up.

“It’s a really hard market but I personally think it is something we have to crack for the future because it is increasingly needed.”

Work on the park could begin as early as next month, if a high court judge decides the scheme does not need to be scrutinized further. If approved, then prospective residents or their families will be able to buy and rent their specific accommodation and also pay for the level of care they require.

Charity the Alzheimer’s Society estimate that one in 14 people over 65 has dementia, with the number of people with the illness expected to rise by up to 35% by 2025.

New, innovative models of care need to be promoted to tackle both the escalating need for specialist care services - Eammon Meadows, JLL

Eammon Meadows, associate director in JLL’s healthcare team, praised the planned development and suggested it could be the first of a growing trend.

“These proposals are a ground-breaking way to help older people with dementia to retain more independence in later life, encouraging greater socialisation and mutual support,” he added.

“The introduction of models such as this and the US Green House Project into the UK market reflect a growing recognition that new, innovative models of care need to be promoted to tackle both the escalating need for specialist care services and the challenges of staffing them appropriately.

“More investment into innovative and person-centred models of care is to be greatly welcomed. However, with recent JLL research pointing to a shortfall of 3,000 care home beds next year alone, planning regulations will also need to change to encourage and foster the development of schemes for older people as essential social infrastructure.​”

A housing association Scotland could be the next to follow Canterbury’s lead, with plans multi-million pound dementia village potentially in the pipeline for Dumfries.

Loreburn Housing Association is spearheading the £20m project to build 180 new sheltered homes for those suffering from dementia across the region.

Lorraine Usher, chief executive of LHA, said: “There is a demand for good quality older people’s housing but we also want to build something cutting edge for the region.

“We have chosen to take on a dementia project because we have an ageing population. The Dumfries facility will be a small estate, like a dementia village, which we hope will include activities for older people.”

The plans for the development include allotments, orchards and community facilities such as a small cinema.

LHA is working with Alzheimer Scotland, the NHS and the council and hopes to attract interest from other groups which work with older people. South Scotland MSP Colin Smyth, vice-convener of the Scottish Parliament’s cross party group on dementia, also supports the move.

With Australia’s first purpose-built dementia village - a $25 million project being built in the suburb of Glenorchy in Hobart - already under construction in Tasmania and the Glenner Town Square day program recently opening in America, momentum behind the dementia village concept keeps on building.