When street artist Banksy spray-painted a picture on the wall of a convict escaping Reading Prison, it attracted visitors from far afield. 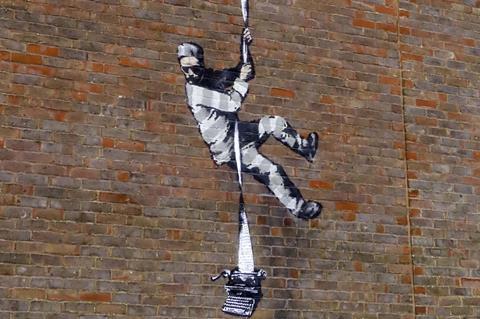 Many people believe the image of a man climbing down a rope made of bedsheets tied to a typewriter was an homage to Oscar Wilde, who was famously incarcerated at the prison, which was closed in 2013 and put up for sale by the government in 2019.

Now, Banksy has offered to sell the stencil he used to paint the image on the wall of the prison for £10m so that he can buy the prison from current owner, the Ministry of Justice (MoJ). He hopes to turn the prison into an arts complex.

A deal had been struck to sell the grade II-listed site to developers, but it fell through last year and Reading Council – along with famous Hollywood names including Kate Winslet and Dame Judi Dench – has backed the arts venue plans.

The MoJ told the BBC that the deadline for bids for the prison had already passed. If it does not consider the street artist’s bid, it would be a criminal act worthy of imprisonment in the prison itself.