Big Splash for Dr Who

The latest series of Doctor Who was eagerly awaited for a host of reasons, but two regeneration experts particularly keen to see Jodie Whittaker’s regenerated version of the sonic screwdriver-wielding timelord are Urban Splash founders Tom Bloxham and Jonathan Falkingham. 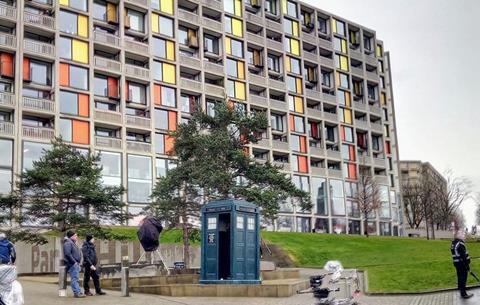 Dr Who landed the Tardis outside Park Hill

Urban Splash’s iconic Park Hill development in Sheffield took centre stage in an episode filmed in May that aired at the end of October. The family of the Doctor’s new companion, Yasmin Khan, lives in the scheme, which was overrun by giant arachnids.

Most developers would not countenance having their flagship scheme associated with a spider infestation, but then most developers aren’t like Urban Splash. On 21 November, Park Hill will take centre stage again as the venue for the book launch of It Will Never Work, which celebrates 25-years of Urban Splash projects.

Arachnophobes intending to attend the event will be relieved to hear that the Doctor succeeded in eradicating the giant spiders.