Inclement weather and a faulty microphone threatened to dampen the mood at last week’s topping-out ceremony to celebrate structural completion of the first phase of ABP’s Royal Albert Dock scheme. 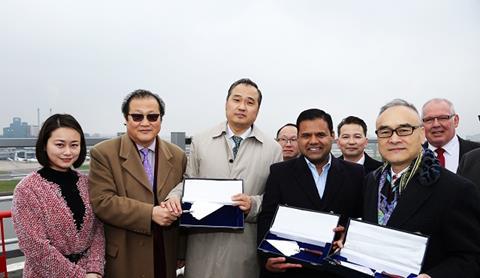 Thankfully, counsellor Jin Xu, the Chinese Ministry of Commerce’s most senior representative in the UK, was on hand to make light of the situation.

During his speech, Jin tapped the faulty mic and quipped “made in Japan”, then turned to the replacement mic saying “made in China”.

The gags kept coming. Turning to Xu Weiping, chairman of ABP, he said that he once had a full head of hair but after coming to the UK to develop the exposed, 35-acre Royal Albert Dock site “all his hair has gone with the wind”.

The Chinese government official also made an unusual offer to outgoing Newham mayor Sir Robin Wales. He said that if Newham needed money, China had plenty of banks, and he could also offer 10 million people.

Wales said he would happily take the money, but not the people. Cue nervous titters from the crowd. All Metropolis can say is don’t give up the day job.