Rain on the Palais 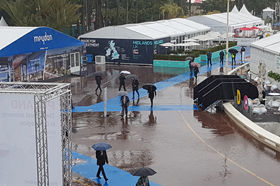 UK delegates hoping for some respite from the Beast from the East were in luck for the first  few days of this year’s Mipim, with Tuesday and Wednesday providing moderate levels of sunshine. But on Thursday, the heavens opened along the Croisette.

Amid scenes of people squelching miserably along the blue outdoor carpet and unwitting phone-checkers stepping into a rather large puddle outside the London stand, some decided to shield themselves from the worst of the downpour by acquiring a brolly from one of the many opportunistic street vendors around the Palais.

These canny operators shamelessly attempted to cash in on people’s misery, setting the going rate at between €20 and €30.

As reported by The Times, footballer-turned-property-developer Gary Neville was unable to use his star status to haggle the vendor down.

One equally unprepared Property Week reporter had more success, however, slashing the price from €30 to a paltry €10. Perhaps spending so much time around the hard-nosed negotiators of the property industry has finally started to rub off…