The Labour Party is still licking its wounds following a disastrous performance in the local elections last week. 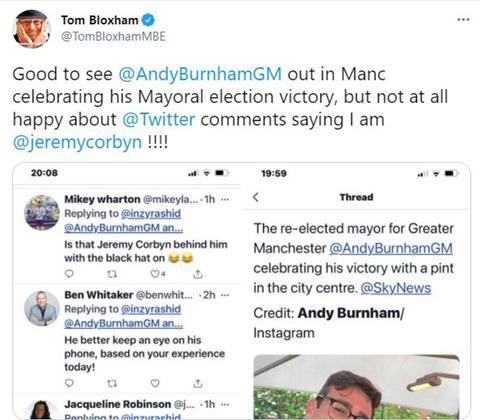 One rare success story was Manchester mayor Andy Burnham who was re-elected to a second term. To celebrate his victory, Burnham was photographed toasting victory with a pint outside a bar in Manchester city centre. The picture was subsequently posted on Twitter. Nothing extraordinary about that you might think.

However, eagle-eyed Twitter followers of Burnham spied a familiar-looking figure in the background of the picture who was also out enjoying a drink.

The individual, who was wearing a rather dapper hat, was a dead ringer for former Labour leader Jeremy Corbyn, according to a number of Burnham’s followers who remarked on the striking similarity between Corbyn and the mystery individual.

It turns out the mystery man was none other than Urban Splash boss Tom Bloxham, who posted a screengrab of the offending messages with the accompanying tweet ‘Good to see @AndyBurnhamGM out in Manc celebrating his Mayoral election victory, but not at all happy about @Twitter comments saying I am @jeremycorbyn!!!!’