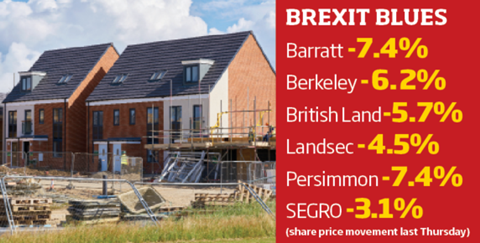 The total value of UK housebuilders slumped by 8.1% or £3bn over the week, making it the worst week for the sector since the EU referendum, when 18.1% was wiped off the value of housebuilders, according to consultant Building Value.

“During the course of last week, it went from a 10% to a 50% possibility of a hard Brexit and that spooked sentiment and people began to get nervous,” said Duncan Owen, Schroder Real Estate Investment Management’s global head of real estate. 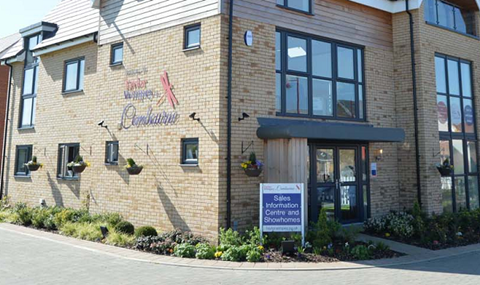 Jefferies real estate analyst Mike Prew argued that the current political disquiet was “exaggerating” existing weaknesses within the sector rather than causing them itself.

“Brexit is important but any CEO who starts to talk about valuation downgrades or reductions to business and blames it all on Brexit will be in for a tough time,” said Prew.

“We are three to four years past the peak of this cycle and now waiting for the downward correction to happen.”

Others see an undeniable link between Brexit and the performance of certain sectors within commercial real estate. London offices would see a price correction as a result of a “disorderly outcome,” said Liberum analyst David Brockton.

“A disorderly outcome would clearly lead to a correction for the London office market,” said Brockton. “And while that result would be painful for NAVs in the short term, most are ready to capitalise on the drop and become net acquirers.”

JP Morgan analyst Tim Leckie went further, arguing that for Landsec “any stress in London office markets due to a difficult Brexit will be welcomed as it has both the new, long-let, high quality portfolio to see a downturn through and the balance sheet to invest in any emerging opportunities”.

However, Brockton added that whether the stock market had sufficiently priced in a Brexit-induced correction was unclear.

The question of the extent to which the market has priced in Brexit risk is further complicated by potentially mitigating factors such as the prospect of a potential fall in the value of the pound, which could lead to an influx of foreign capital.

For now, Owen said he expected market volatility to continue as already “nervous owners and buyers are set off by the smallest thing”. “I think there are a few twists and turns still to come,” he added.