Some of the biggest names in technology and property gathered last week for the inaugural Mipim Proptech Europe 2018 conference at the Palais des Congrès in Paris. 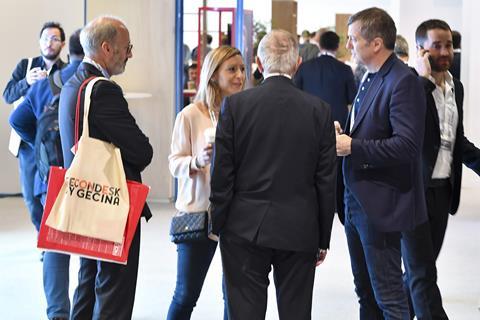 Around 1,500 people attended the two-day event, which covered a broad range of topics including artificial intelligence, blockchain, smart cities, big data and the property industry’s changing attitude to tech.

Here are some of the highlights from the event:

Property is still behind

There was an overwhelming feeling that despite growing interest in proptech, property is still years behind when it comes to tech. Angelica Donati, chief executive of Italian developer Donati Immobiliare Group, went so far as to call the property industry “backwards”. When asked about the industry’s reticence, Aaron Block, co-founder of Metaprop, blamed “too many old, white men” sitting comfortably at the heads of real estate companies unwilling to take risks.

After #MIPIMPropTechEU it was clear that #proptech is more than a topic for the #realestate industry. According to @MekaBrunel @Gecina "Innovation is first and foremost a vision". Find out more about her insights and ideas, and keep the discussion alive. https://t.co/1jgImhSgQt

However, Alexandre Grellier, chief executive of virtual data room provider Drooms, said that attitudes were changing. He said the financial crisis in 2008 had driven “cowboys” from the industry and encouraged property professionals to embrace innovation.

Another area where real estate lags behind is customer service, according to Vincent Pavanello, co-founder of proptech networking group Real Estech. Because there is such high demand for property and such low supply, few working in real estate feel the need to offer the customer a good service, he said. His feeling was that proptech would challenge this old world order.

With innovations such as crowdfunding and offsite construction, it is now easier and cheaper to enter the property market. Lower setup costs mean higher competition and this, in turn, means real estate will have to focus more on customers.

Alex Edds, director of innovation at JLL, predicted that data could be used to more accurately value property. By having millions of data points about things you had not even considered relevant to a valuation, big data analytics can discover what Edds called the “unknown unknowns”.

Others highlighted how data can now be gathered to help manage buildings better. For example, Donati said that sensors in toilets can automatically order more toilet paper when it gets low. She stressed that technology like this could make it possible for buildings to effectively look after themselves.

Great insights from @RomaTheEngineer on how innovation in the 1800s had shaped how we build buildings and live in our cities, to this day! #MIPIMPropTechEU @MIPIMPropTech pic.twitter.com/PCX6Q3lD2K

However, Rand Hindi, chief executive of voice assistant developer Snips, warned about the privacy issues created by technology that allows a third party to have constant and unfiltered access to everything that happens in an office. Its technology allows companies to build their own voice assistants to guarantee privacy.

Cees van der Spek, chief executive of German developer OVG, highlighted the fact that it took only 13 months to build the Empire State Building 100 years ago. Nowadays, it would probably take more time – not less – to build an equivalent building.

Offsite construction has the potential to speed things up considerably. New technology is also accelerating traditional ways of working in the property industry. Drooms’ Grellier has developed document-reading software that he claims makes the process of due diligence thousands of times faster. As well as this, AI has the potential to quicken the pace of the planning and design process.

One word that inspired both excitement and eye-rolling in equal measure was ‘blockchain’.

Find out more - How Blockchain will revolutionise the industry

For some it is the future of the industry. Michael Sigda from Olarchy, a tech company specialising in blockchain solutions for real estate, predicted that multimillion-pound real estate deals taking place entirely on blockchain could soon become the norm.

Yet Robin Rivaton, co-founder of Real Estech, argued that blockchain was “overhyped” and that it was only one part of the tech revolution happening in property.