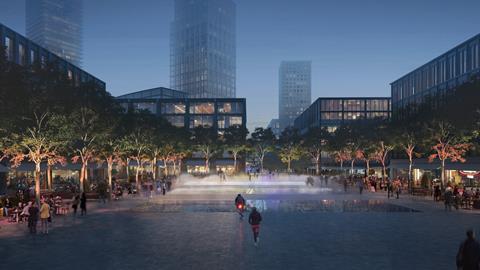 It is one of the longest-running development sagas in London.

But this week, plans to transform Canada Water moved closer to fruition as British Land revealed it had signed a master development agreement with freeholder Southwark Council for the 53-acre site and submitted a detailed planning application for the first part of the first phase of the development, comprising 285,000 sq ft of office, retail and leisure space and 270 homes, 35% of which would be affordable.

Work on the first three buildings is expected to commence next spring and British Land has signed a 500-year lease covering the entire town centre site, south over the Thames from Canary Wharf.

So why has it taken so long for the developer to get to this stage and what are the chances of it finally pulling off its ambitious £4bn scheme? British Land spent five years amassing different parcels of land in the area before unveiling a draft masterplan for the site and public consultation in February 2016.

Roger Madelin, who was poached from Argent to lead the project and took members of the press including Property Week on a walking tour of the site last week, said: “Submission of our application for the Canada Water masterplan marks an important milestone in the delivery of this project. This major urban centre at Canada Water will provide an exciting place to live, work and visit.”

Behind the scenes with BL 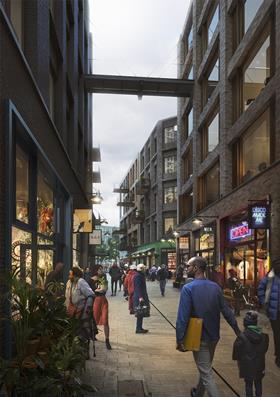 A walk through the Canada Water Masterplan

Madelin bowls up at the Canada Water Café in shorts, suede shoes and horizontally striped socks, having just filmed an interview with the BBC. The white linen shirt you may have seen the 59-year-old wearing on TV looks pretty cool. Cariaga, is, however, all-over cool. The 42-year-old project director for the £4bn scheme arrives in a black top and trousers for the site tour, accoutred with a looped gold necklace, pearl bracelet and Cartier Tank watch.

Madelin leads the way, as he must have done countless times over a decade or more working on the 67-acre King’s Cross development. He is a high-octane character given to friendly ribbing, witty asides and discourses that spring off at tangents. We are to embark on a “passeggiata”, says Madelin, who joined British Land in February 2016.

A passeggiata, says the dictionary, is “a leisurely walk or stroll, especially one taken in the evening for the purpose of socialising”. Madelin says the masterplan layout at Canada Water will encourage passeggiata.

“We are going to ring a bell every Wednesday at 4pm.” A signal for everyone to down tools and socialise. “We could increase productivity by not making people work from 9 to 5 every day. People get pissed off and stressed and their mental health is not great.”

It can be tempting to dismiss this socialising stuff as nonsense. But Madelin’s passion is genuine and it sinks in that he may have a point. “I have had more people talking to us here than I’ve ever had for any project I’ve worked on. Everyone is interested in the buildings. But they are just as interested in the outdoor space and how we plan to make Canada Water a genuinely social place for all social classes. I’ve seen potential occupiers in tears when they have this vision explained.”

Cariaga ends the tour by showing the Canada Water model, which includes a 45-storey residential tower. Cariaga joined BL in June 2014 from Landsec, where she worked on developments in Victoria, following a career at Barratt and Crest Nicholson.

The trained urban planner displays grace, patience and an unhesitating grasp of detail while being questioned on what will surely be the biggest application to be submitted in London this year. Document printing took 10 hours.

“We will be starting on three buildings, containing 285,000 sq ft of leisure and workspace.” Workspace? “Yes, we don’t say offices these days,” smiles Cariaga.

Later phases include a 45-storey residential tower and the conversion of the 119,000 sq ft Harmsworth Quays printing plant into a 5,000- capacity events centre. The Daily Mail & General Trust vacated the 1980s plant five years ago and events have already taken place there under a five-year temporary permission.

Speaking from within the vast former print hall, Madelin said British Land was pressing ahead with designs for the building. “We could be going to planning at the end of this year, or early next year. I’ve seen some fabulous sketches from Hawkins\ Brown.”

Madelin stressed how well the halls were already soundproofed – rock bands regularly play gigs in the venue. “The entrance will be a three-minute walk from Canada Water station,” he says, answering the unasked question of how local residents may feel about revellers spilling into the streets.

When British Land bought the part-leasehold, part-freehold 14.5 acres in 2012, it was with “a view to delivering a mixed-use scheme with a significant element of employment”.

The first part of that sentence signalled a desire to build flats; the second was to placate the freeholder, Southwark’s Labour council. Leader Peter John initially refused to sell the freehold, worried about job losses. With only 60 years left on the lease, building flats was not an option. 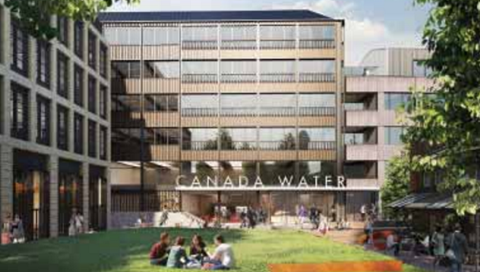 “It is fantastic to see this project moving forward,” said John during the walking tour. “British Land has done great work to consult and engage with local people and the resulting masterplan will deliver what local people want to see, including a guaranteed 35% affordable housing, split 70% social rent and 30% shared ownership, new retail spaces and a brand-new leisure centre.”

He added that, when complete, Canada Water would create 20,000 new jobs, with thousands of people working on site during construction. British Land has also signed a “social regeneration charter” with Southwark.

“This will ensure the lives of existing local residents will be improved by the project, which we believe to be a first for a project such as this,” said John.

Madelin, who was responsible for the development of King’s Cross during his time at Argent, added: “We will put health and wellbeing at the heart of our plans to ensure the buildings and spaces we create encourage and support healthy lives.” A decision on the detailed application is expected by the end of the year. If it is signed off , the long overdue transformation of this part of south-east London could soon finally be under way