Birmingham City Council has unveiled its masterplan for the 2022 Commonwealth Games athletes village including plans to convert the site into a scheme comprising social housing, for sale and private rental homes and a retirement village after the games. 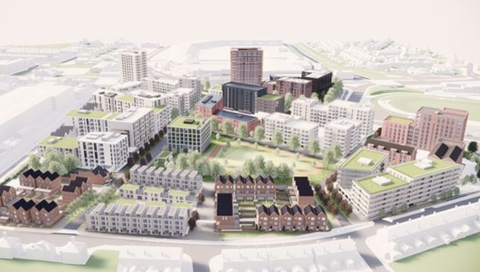 The 1,400-home athletes village in Perry Bar will be built on the site of the former Birmingham City University campus and will house 6,500 athletes during the Games which will run from 27 July to 7 August 2022.

Alongside housing, the site will also feature a running track and green spaces located next to the Alexander Stadium where the track and field events will take place. The track is expected to play host to recent European Championship gold medallists Dina Asher-Smith and Zharnel Hughes.

The athletics stadium in Perry Park is being upgraded into a 40,000 seat arena, from its current 12,700 capacity, ahead of the Games.

The games are expected to provide an overall boost the West Midlands economy of £750m. The site has become available as a result of Birmingham City University relocating to a new purpose-built campus in the Eastside district next to the planned HS2 terminal and demolition of the Perry Barr site began earlier this summer.

Post-Games, John Crabtree, chairman of the Birmingham 2022 Commonwealth Games Organising Committee, confirmed that the site will be converted into around 1,400 new houses alongside an extra care village for older people and a community centre.

Birmingham 2022’s venues will include a new aquatics centre

Crabtree added: “In the seven months since being awarded the 2022 Games, there has been a lot of work done to prepare this planning application.

“Now is the time for anyone with an interest in the regeneration of Perry Barr to look at our plans in detail and give feedback to the city council planners. We want the people of the West Midlands to have ownership of the Games and this is one of the first significant ways in which they can do that.”

Other venues proposed include an international competition standard aquatics centre at Sandwell and a temporary venue within Victoria Square.