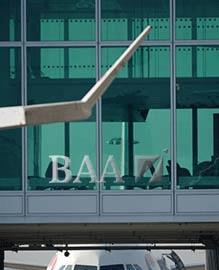 Colin Matthews, baa's chief executive, said: 'We have decided to begin the process of selling Gatwick Airport immediately. Gatwick is one of Europe's premier airports, the busiest single-runway airport in the world, and it was used by 35 million passengers last year.

'Gatwick has long been an important and valuable part of BAA and the decision to sell was not taken lightly. We believe that the airport's customers, staff and business will benefit from the earliest possible resolution of current uncertainty.'

It follows a ruling in August this year the Competition Commission ruled that BAA may be forced to sell up to three of its UK airports because of concerns over its monopoly.

The watchdog recommended that BAA sell two of its three London airports –probably Stansted and Gatwick – as well as either Edinburgh or Glasgow airport.

Christopher Clarke, chairman of the BAA Airports inquiry group, said at the time: ‘We have provisionally found that there are significant competition problems arising from BAA’s common ownership of seven UK airports. This is evident from a large number of factors including its lack of responsiveness to the needs of its airline customers and a lack of initiative in planning capacity.’

BAA’s Matthews said: 'When the Competition Commission published its provisional findings, we said that we would be realistic in our response, though we disagree with the Commission's report and the analysis on which it is founded.

'We will continue to present our case, in respect of the South East airports and those in Scotland. At Stansted, we believe that a change of ownership would interfere with the process of securing planning approval for a second runway, which remains a key feature of Government air transport policy.

Runway shortage
'The Commission itself states that a shortage of runway capacity in the South East is a main cause of poor service standards, but we believe its proposed remedies will delay delivery of that capacity.’

He said that BAA will continue to ‘change in many respects’. He said: ‘We have a new management team. Our priority is to improve the quality of service we offer passengers and airlines. Success depends not only on our day to day management of our airports, but also on policy-makers taking the right decisions on runway capacity and future regulation.’

The Competition Commissions is still seeking further views on which airports should be sold and the effectiveness of the system of regulation, and will publish its final report in 2009.