Battle for mayor of London heats up

The runners and riders in the London mayoral election took swipes at each other last night in the LandAid Debate, with housing issues the key focus. 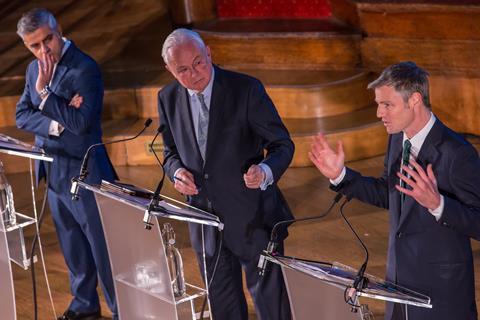 “The question in this election is not whether we need to solve the housing crisis, it’s who will solve the housing crisis,” said Goldsmith, who was joined on the panel at Westminster Central Hall by Liberal Democrat candidate Caroline Pidgeon and Darren Johnson from the Green Party. “Those in the Sadiq camp are being deafened by fantasy and unachievable promises.”

However, Khan hit back, saying he would provide “clear leadership” on housing and reiterating his promise to set up Homes for Londoners, a city hall department to unlock land and boost housebuilding, as well a new not-for-profit lettings agency.

The event raised £50,000 for LandAid, and its chief executive, Paul Morrish, introduced the debate by announcing its new 10-year project around youth homelessness, which he described as “a unique partnership between the property industry and the charity which would help end youth homelessness in this country”.

Khan described the recent increase in levels of homelessness in London as “outrageous,” while Goldsmith described it as “a farce and a huge shame”.

Asked by the debate’s chair, former BBC journalist Sir Martyn Lewis, how they would handle the housing crisis, all of the candidates said they would aim to deliver 50,000 new homes in each year of their tenure and would work with relevant authorities to access public land for development.

Goldsmith slammed Khan’s plans to cut the Transport for London budget by £2bn, claiming that protecting the transport body’s funds would help bring forward land and adding that infrastructure was a vital element of any housing development. “If we don’t improve the network, we won’t solve the housing crisis,” he said.

On affordable housing, Khan used the government’s definition of an affordable home in London under its starter homes scheme as one costing up to £450,000 to strike a blow at Goldsmith, but the Tory candidate hit back.

“I’ve never described a £450,000 home as an affordable home,” he said. “It’s a cap, but the norm is much lower.” He added that he would work with local authorities “to make sure they get the maximum number of affordable homes in every development”.

For his part, Khan pledged that he would deliver “genuinely affordable homes” by releasing Transport for London land for shared ownership homes with £5,200 deposits and creating a new ‘London living rent’ at a third of average earnings, while Lib Dem candidate Caroline Pidgeon said she would set up a building company run by the mayor’s office.

Goldsmith also said he would create 360,000 new homes by “regenerating some of the 1950s and 60s estates that are past their sell-by date,” and promised that all current residents would be offered homes in new developments. “We can massively improve the homes people are living in at little cost to the taxpayer,” he said.

None of the candidates said that they would build on the green belt, but releasing brownfield land for development was high on all of their agendas. Khan said there was ample space for more housing and that London could double its housing and still have a lower density than Paris.

Khan said certain types of property investment were welcome in the capital, but stressed that “we can’t allow London to be a place where people launder their money.” He also said he would amend the London plan to require councils to make it a condition of planning permission that developers market schemes to Londoners before foreign investors.

Goldsmith was more measured, saying that London could be “a place where people live, work and invest in,” however he said that if he were elected homes on public land would be set aside for Londoners. He also backed build to rent, saying that that large-scale PRS developments, backed by institutional investors, “were a really important sector” that had been “neglected” in London.

Pidgeon elicited gasps from the audience when she described the Walkie Talkie and Cheesegrater as “blights on London’s skyline,” while Goldsmith said communities should be more involved in deciding which developments are granted planning permission in their areas. Khan was most liberal, describing the Shard as a “gorgeous building”.

“It’s about context when it comes to tall buildings,” he said. “I’m not against them per se: the London Plan will protect London buildings as long as they’re good”.

After declaring is support for the campaign to leave the European Union earlier this week, Goldsmith stood his ground on his pro-Brexit stance, pointing out that UK had forged strong business relationships with countries such as the US, Canada and Australia without needing to be part of a formal union. “Many of the same people that are predicting economic calamity if we leave the EU are the same people who said London would shrivel up and cease being an important city if we didn’t adopt the Euro,” he said. Pidgeon said it was “nonsensical” that a potential mayor of London would oppose being part of the EU, and that a Brexit would risk making the UK “a tiny little country with hardly any mates,” while Khan stressed the “huge” business benefits of EU membership, including global businesses choosing to locate their European headquarters in London.