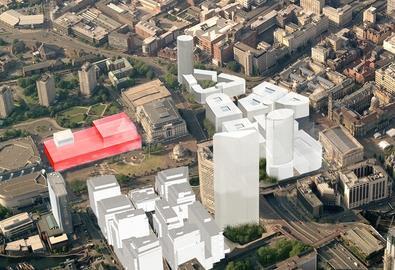 The proposed Library of Birmingham will be developed on a shared site with the Birmingham Repertory Theatre (The Rep) in the city.

The Rep and the library will be able to share facilities to create an area for ‘knowledge, learning and culture’ close to Birmingham Symphony Hall and the ICC the building which sit next to Centenary Square.

Library solution
Cllr Mike Whitby, Leader of Birmingham City Council said: ‘Over the last 16 months we have carefully assessed the feasibility, costs and funding requirements associated with delivering an integrated library solution, utilising this important site and linking with The Rep.’

The need to develop a new library was identified by the council when it realised the existing Central Library, in Chamberlain Square, was no longer fit-for-purpose and in need of modernisation.

Best in Britain
Central Library was opened in 1973 and is said to be the busiest public library in Britain, attracting more than 1.5m visitors a year.

Under the new proposals the land now occupied by The Rep’s workshop and conference facilities will be redeveloped to create a new medium sized auditorium and related facilities for shared use.

Subject to Cabinet’s approval of the proposals on 22 October, the next step will see a project manager and design team appointed to take the project forward and conduct an international search for an architect. The council hopes to finish the project by summer 2008.